More than 74 million people viewed into the first debate, which was characterized by its uncontrollable, chaotic nature with Trump repeatedly interrupting and insulting both Biden and Wallace—a violation of the rules that both campaigns agreed to prior to the debate. Trump interrupted 71 times compared to Biden’s 22. Trump also leveled accusations and lies against Biden and refused to answer many of the questions posed to him. One glaring example of this was Trump’s failure to denounce white supremacist groups when prompted to do so by Wallace and even urging one such group to “stand back and stand by” before blaming the violence on the “radical left.” Other examples include Trump claiming that, because of his administration, insulin is “so cheap, it’s like water,” that he is responsible for the return of the NCAAs football season and that this year’s election results should be questioned, even calling on his supporters to be “poll watchers” on Election Day. Biden also refused to pull punches, calling Trump a “clown” and asking Trump “will you shut up, man?”

Critical responses to the first debate have echoed the chaos of the debate itself, with media personalities like CNNs Jake Tapper calling it “a hot mess, inside a dumpster fire, inside a train wreck;” ABCs Martha Raddatz calling it “mud-wrestling” and former Democratic advisor and ABC anchor George Stephanopoulos saying that it was “the worst presidential debate I have ever seen in my life.”

In The Evanstonian’s efforts to cover these debates, we will be following the voices of several students as Nov. 3 approaches. Following are excerpts from interviews with five students—seniors Gabe Karsh, Levi Rosing, Lara-Nour Walton and Jonathan Zenkich, and junior Mira Littmann—regarding their thoughts on the debate and on the election broadly. While none of these students are able to vote, their perspectives still offer insight into what ETHS students think of the election.

What were your first impressions while watching the debate?

Karsh: “I think Trump definitely won that debate. I don’t know if he won on an argumentative level, but, watching it, you get the sense that he was more with it than Biden. He was sharp, and he knew what he was talking about, even though he didn’t.”

Littmann:” Honestly it was really scary… As a young person and someone who’s growing up in America, this debate made me question my hope for the future…. It makes me really sad that the country I’m growing up in is so divided that debates have to be like this. Debates shouldn’t be people screaming at each other and making personal attacks. I feel like our country was supposed to be founded as this great democracy where everyone could have a say in politics, and this debate really didn’t reflect that.”

Rosing: “I think Biden won, but not in a traditional way…. Biden was debating, Trump was talking to Chris Wallace…. You can say Biden is the winner, and Trump is the loser, but the real loser is Chris Wallace, to the extent that he asked Trump if he wanted to change places.”

Walton: “If we are talking about winners and losers here, I think we can all come to the consensus that the debates last night did not yield a definitive victor. But, there was a clear loser: Trump. Trump is trailing in the polls and needed to use the debates to win the minds of undecided voters. While his presence was no doubt potent, he made no points to persuade those key voters to come out to the polls for him. Denying the efficacy of masks, appealing to white supremacists, targeting Hunter Biden’s addiction and acting like a belligerent child were bizarre and unpopular tactics on his part.”

Zenkich: “I’d say that my initial impression of the debate was not very good at all. I found the first segment to be very chaotic…. I definitely thought Biden had a better chance of winning… I really don’t have a favorable view of either of the candidates. I thought Biden had a pretty big edge because I think Trump had a bit of a stain on his reputation with COVID.”

What did you think about the candidates’ performances?

Karsh: “I did not expect Biden to be as incoherent as he was. I got what he was talking about, but he struggled to form sentences at times…. At least he wasn’t worse than what people [including Trump] were building him up to be. I also think there’s a tendency to paint Trump as an idiot, and he did not seem like an idiot at all. I don’t think he’s a genius, but I definitely didn’t get the impression that he was mentally incapacitated as some rumors say; there were points during his presidency where I believed that, but right now, I don’t believe that at all.”

Littmann: “Biden won. When he was actually able to get a word in, he managed to convey his actual policy ideas and talk about where he wanted to take the country. He was able to clarify his differences from the rest of the Democratic party, not all of which I support, but which I think will be helpful in winning over moderate, undecided voters. Overall, he was pretty clear about what he would do as president and what he stands for. I think he did a great job of talking to the American people, not just responding to Trump.”

Rosing: “There were a couple of hiccups for Biden. He was obviously under tremendous stress, and luckily that didn’t upset the debate… It’s just a shame that Trump didn’t follow the rules…. And he still didn’t denounce white supremacy, that was the craziest part. In all of this racial upheaval, he still won’t do it.”

Walton: “Biden stared down the barrel of the camera when he made his points, giving folks at home the illusion that he was addressing us specifically. This was a good strategy. Next to the President, who never once looked at us and seemed to be more preoccupied with disparaging the [former] Vice President than providing voters with well thought out and factually sound answers; Biden seemed to be the candidate who cared most about actual Americans.”

Karsh: “Most voters don’t think that the debates are going to change their minds, but I feel that perceptual dominance is important, and if Trump seems like he won the debate, that matters.”

Littmann: “As someone on the left side of the political spectrum, I was already planning on supporting Biden before the debate and not much could have changed that. I was horrified by Trump’s behavior, and I think Biden did a great job. However, a lot of right-wing people who I’ve talked to think that Trump’s behavior was totally acceptable, even admirable. They love his quick one-liners and find his insults entertaining and spot-on…. I don’t think a lot of voters have changed or made-up their minds after this debate.”

Rosing: “I don’t think the debate has done anything, and if the debate does nothing, it’s a win for Biden. The polls might go a little up and a little down, but eventually, they’ll just come back to the same place.”

Walton: “Nearly a million people have already voted, I wonder how important these debates are. Also, considering how polarized our country is, I can’t fathom how many people can seriously still be undecided.”

Zenkich: “My opinions on the candidates didn’t change. It kind of just reaffirmed what I thought. I think that Trump is a narcissist; he’s incapable of self-reflection. I think Biden is not in tip-top speaking shape, I think he’s a bit timid; that’s definitely how he came across to me in the debate… My view of the election only changed slightly, because I don’t think there was a real winner of the debate. I think that, overall, it was slightly better for Biden.”

What are your thoughts on the candidates generally?

Karsh: “I wish Biden was more of the radical left, but he’s not… I would vote for Biden over Trump in a heartbeat, but when [he said that there are a few bad apples]… That was the main-stream Republican position like four years ago.”

Walton: “In my opinion, one of the most important parts of being a president is giving hope to the people. We didn’t get that from Trump at all. In fact, I don’t think we learned anything about the president’s tentative plans for his second term. Trump was rightfully dragged through the mud over his poor handling of COVID-19, but rather than offering plans to remedy the public health situation and rebuild the economy, he stoked fears over socialism, ANTIFA and how our schools are indoctrinating the American youth to be ‘unpatriotic.’ He paints a very grim picture of the U.S. and tries to convince us that there is no light at the end of the tunnel without his guidance… when really, his (hopefully sooner rather than later) imminent succession would be the light at the end of the tunnel.”

What are your greatest fears moving forward?

Karsh: “My greatest fear is that Trump loses, definitely loses, but stays in power through the courts, through voter suppression or if he claims squatter’s rights in the White House. He said he wouldn’t trust the results.”

Littmann: “This debate made me a lot more nervous about our country’s future…. I’m feeling really scared for Nov. 3. I’m not 18, so I don’t have any say in what happens, and I feel really helpless. I’ve been reading the news every day and having conversations with family and friends about what’s going on in the country and there are so many things that need to be fixed about the way that we function. There’s such a big divide in our country right now, and there’s so much hate. I’m really nervous about where our country is going.”

Rosing: “People need to understand that [Trump is] the stage before fascism. Everything is on the line, everyone should be scared, and not enough people are. We know who this president is, and we know how much more he can do.”

Walton: “I’m scared about the future of this country. It is more important than ever to vote. If that wasn’t clear before, then it should be now.” 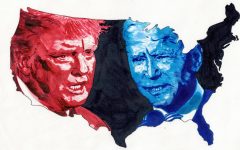 The only vice presidential debate of the 2020 presidential campaign took place on Oct. 8 at the University of Utah in Salt Lake City. The 90-minute se...

Road to the election: thoughts on the presidential debates

Here is a collection of songs that have shaped our editor's summers! We plan to release a new playlist every month. ... 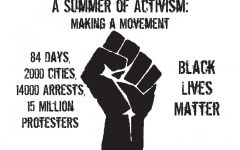 A summer of activism: making a movement