After months of lead-up, the 2020 election ended in a victory for former Vice President Joe Biden and California Sen. Kamala Harris. The election served as a catalyst for students to get involved in the political process as many realized that the election would not just determining the next president, but serve as a turning point in the American story.

“I don’t think this [was] a regular election. This [was] a test for our country to really show where we’re at, and it’s showing that we’re not at a good place. A lot of people in the world right now care more about power and money… than a people’s human rights. That’s a difficult thing for all the people that are being affected by that,” senior and Student Representative Carmiya Bady said.

Given Trump’s record of racism, misogyny, bigotry and the refusal to act against threats such as climate change and white supremacy, it is no surprise that many viewed this election as fundamental to protecting American rights and as an opportunity to start changing the future.

“[This election is] about equal rights. It’s about the fate of the climate. It’s about my future. If we don’t elect someone who’s gonna follow basic human rights and kindness, I don’t even know. I’m just praying that people vote for kindness,” senior Mia Houseworth said. “I was talking to someone who voted for Trump, and they only talked about the economy. A meager tax break is not going to make me forget about racism, it’s not gonna make me forget about the climate, women’s rights, LGBTQ+ rights. This election shows that people here in the United States are willing to hold white supremacists accountable, that they are willing to take action on the climate, they’re willing to listen to others.”

Many students echoed this sentiment, saying that regardless of the risk they feel, they needed to stand up to support the communities who are suffering because of him.

“None of this election feels like it has to do with me, because I’m a cis, white male. It’s more about the people around me. It affects the people I care about. That’s what’s on the line right now,” senior Patrick Hughes said.

While the election has ended with a Biden victory, Trumpism and the beliefs that it espouses are far from gone. Trump won 47.3 percent of the national vote and upwards of 70 percent of the vote in states including Wyoming as of Nov. 15. This close victory has left some students further pondering the divisions that are rendered clear by this election.

“I thought it couldn’t be quite this close, because, I guess, I had a little lingering faith in humanity,” senior Callie Stolar said. “Biden is the most moderate, unproblematic white guy that you could put up, and he was with Obama, who got the popular vote two elections in a row. Then, you’ve got Trump, who… represents every kind of hatred you could possibly get. Plus, he was met with a global pandemic and handled it horrifically. It feels like no one in their right mind could look at all of that [and still support him].”

The close nature of the election led to an incredibly tense week for many students. This tension was at its highest on Nov. 3, as states began to announce their votes.

“I think I watched it for four hours. I sat there, and I watched the TV; I did cry once with my sister. It was painful to see some of the states that I hoped to turn blue go red, especially Florida. On social media, I was going through what people were posting, and people were kind of feeling the same way. I went to bed probably around 12 a.m., I just couldn’t anymore, but I couldn’t sleep all night,” Houseworth said.

“I [was] definitely feeling really stressed… and I was pretty down on Tuesday night,” junior Lily Aaron said.

One reason that Tuesday night was so stressful was due to the impact of mail-in ballots on the election. Due to Trump’s constant attacks on voting by mail, the majority of his supporters voted in person on Election Day leading to the appearance of a Trump victory as votes were tallied that night.

“A ton of media outlets had been talking about the possible ‘red mirage’ that could happen on election night. It was one thing to know that it would happen. It was another thing to see it,” senior Dan Drew said.

Beyond the fears present during the week of the election, there is the lingering terror of Trump’s refusal to acquiesce and agree to a peaceful transfer of power. Even as Biden declared victory, Trump’s legal team has continued to file lawsuits against several swing states on the basis of illegal ballots and has urged his supporters to protest vote counting to ensure a “fair count.” Most of these lawsuits have been dismissed by the courts for lacking sufficient evidence.

“[Trump] declared victory for himself and said that he’s going to be using the Supreme Court to try to swing the election in his favor… I kind of had an idea he was going to do [this], but I really hope that doesn’t happen,” junior Holden Johansen said.

While these fears are well-founded, most have begun to think about the future and the changes that have become possible with Trump out of office.

“If I was able to vote, I’d vote for Biden, but I feel like he’s not radical enough for our generation. I believe in radical changes, because reform just is not going to work. It’s just making people comfortable, and it’s not solving anything,” senior Izzy Basso said.

Basso’s beliefs are echoed by many students who felt that, while Biden was the only available option, he was far from a perfect candidate. Given his role as president-elect, the next step, according to Hughes, is a simple one: “it’s working on pushing.”

“I hate Biden. He’s a moderate, and he tries to compromise on a lot of issues [on which] compromise shouldn’t be acceptable,” senior Aiden Goodman said. “I think that the Democratic strategy of appealing to moderate voters is stupid and counterintuitive…. I want to see people with backbones in politics because, at the moment, everything that I’m seeing is a bunch of [liberals] who are trying to appeal to Republicans and right-leaning voters. If the Democratic party compromises and the Republican party doesn’t compromise then there is a direction that we are moving.”

Evanstonians feel that Biden needs to be pushed on defunding the police and climate action.

“I think immediately, we have to address climate change. We’ve already lost four precious years and decades before that…. Obviously, police reform and the criminal justice system needs to be addressed, but I honestly don’t think Biden is going to do that much about that,” Stolar said.

While Biden may be able to accomplish some of this work on a national level, the bulk of the work remains on community organizers who seek to better their neighborhoods.

“I’ve really been upset by the candidates’ [conversation around] defunding and abolishing the police. I feel like there has not been enough attention… [Our role is to] take the issues that are [found across] the United States, and then bring them into Evanston. [For example], defunding the police and getting SRO is out of ETHS,” Basso said.

In addition to taking action on these issues, many hope that Biden will heal the divides in our country, something that Biden spoke to in his acceptance speech on Nov. 7. One step in this process is working to undermine the strength of white supremacist hate groups.

“[Biden needs to] crackdown on hate groups. When Trump said to the Proud Boys “stand back and stand by,” that is utterly ridiculous. You wouldn’t think it would be that hard to condemn white supremacy, and I think that Biden will most definitely take a step in the right direction to formally condemn it,” Aaron said.

The increased visibility of white supremacy in recent years speaks to a broader need to unify a marred nation rather than continue resorting to tribalism and an us-versus-them mentality that has been on the rise nationally.

“Racial tension is a really, really big issue, because if we don’t feel united as a country, then all of these other things aren’t going to matter, since we’re at war with ourselves. Somebody has to bring us together. I don’t know—it seems really difficult when you have people that are so tribal and that are so focused on themselves and their power on both sides—but that is something that definitely needs to be looked at a lot,” Bady said.

Change at the systemic level is a slow process, and while these goals may not be reached, the sheer possibility of existing is a welcomed change.

“Biden probably won’t accomplish everything that I’m hoping he accomplishes. But, he’s close enough. He’s closer than Trump [would] be,” Houseworth said.

While Biden may not be who many would describe as a perfect president, he offers a change and the possibility of hope for those who have worked so hard to advance our country. Yet, the work doesn’t end: activist movements will continue to fight and push to build a world where, to quote Seamus Heaney, for whom Biden has a strong affinity, “the longed-for tidal wave of justice can rise up, and hope and history rhyme.”

“Not everyone is a policymaker. Not everyone is a big change-maker, but there are some small things that you can do right now that really do matter,” Bady said. “They make a big impact, and whatever your thing is, just go out and do it.”

The 2023 new year has been nothing short of eventful thus far in the world of politics. To start off the year, there has already been an investigation... 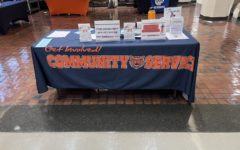