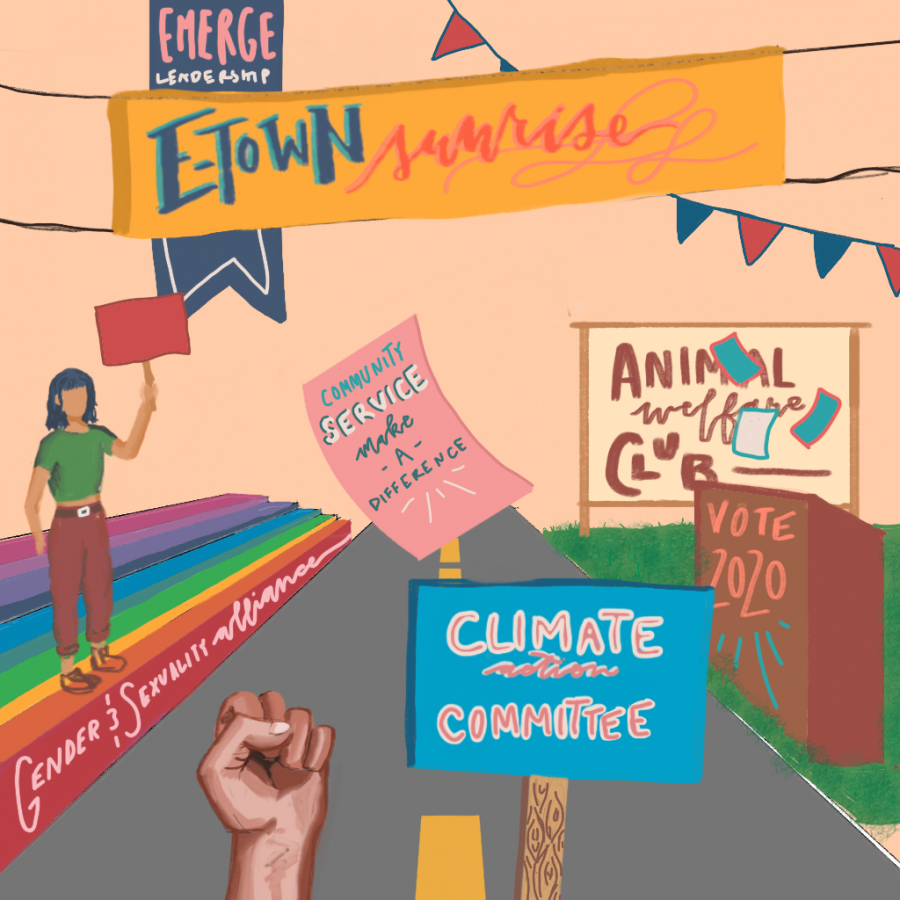 Although most ETHS students will not be eligible to vote in the general election, many are finding other ways to be politically involved leading up to Nov. 3. There are plenty of opportunities to become part of the political process ranging from school-sponsored clubs to organizations in the broader community, all of which offer outlets for students to engage with issues relating to the election and other political issues. ETHS students have chosen to dedicate their time to engage with the 2020 election, recognizing how greatly it will impact our nation and their own power to influence the outcome. What follows details some of these student-run groups and the actions they have undertaken.

The Civic Engagement Committee, one of eight student-led subcommittees of the Community Service Club, focuses on actively engaging students with social issues and empowering their voices in civic conversations. With activities ranging from voter registration and education to calling elected officials about relevant topics, it’s a great outlet for ETHS students to get politically involved by doing community service.

“Even though most students at ETHS aren’t old enough to vote yet, it’s still so important that we stay involved in our communities,” junior and committee leader Mira Littmann said. “It won’t be long before we grow up and have a big say in how the world works, and we should be informed and ready to create change and make the world we want to live in one day.”

One important form of engagement is education. For their first event of the year, Civic Engagement held a “chalk-out” on Sept. 21 to distribute information on candidates in the upcoming election and learn about the issues students are paying attention to.

“[Thirteen] passionate volunteers wrote and drew about the issues that mean the most to them this election cycle and received our fliers with the positions of important candidates on the local and national ballot,” senior and committee leader Ben Ward said. “Our ‘chalk-out’ was a fun and safe way to get students engaged in politics, and it was very successful.”

Leading into the election, Civic Engagement will continue working to keep ETHS students actively involved in politics by ensuring that students are registered to vote.

“We’re planning on sharing information about how to register to vote, why it’s important to [vote] and resources for education about all candidates,” Littmann said.

Ward expands on the importance of student engagement in politics, and why older people should begin to listen.

“By the time of the next presidential election, every single person at ETHS, along with millions of others across the country, will have reached voting age,” Ward said. “If today’s politicians don’t focus on the issues that matter to us, they will lose the support of our generation.”

“It occurred to me when I was trying to organize stuff for Pete Buttigieg back in January. I got in touch with the Illinois High Schoolers For Biden people, and I talked to them about what it would entail starting a chapter,” Kaplan said.

The main action events hosted by ETHS High Schoolers For Biden are phone banks where students register voters, talk to registered voters about voting for Joe Biden and recruit volunteers for other events.

There are also events that are extended to High Schoolers For Biden chapters around the country and identity-based chapters such as LGBTQIA+ Students For Biden and High School Women For Biden. The events hosted by national leaders throughout the summer and fall have been centered around policy discussions, watch parties and different types of phone banking events.

One of the goals of the club, sponsored by AP Government and Politics teacher Darlene Gordon, is to encourage students to learn about political views they don’t hold.

“Most of the views that we commonly hear at ETHS are liberal, and while that’s fine, it isn’t representative of all politics in our country,” Zenkich said. “We hope to expose people in the club to these views through the discussions that we will have, as well as the debates that we plan on setting up where people will be randomly assigned a view to represent.”

The debates in Politics Club will maintain a respectful tone with an emphasis on learning about other perspectives and sharpening debate skills.

“One of our first planning steps was drafting a set of rules and guidelines to ensure that debate stays civil,” Ward said. “As I have opened my mind to opposing beliefs, I have found that it strengthens my own arguments by helping me understand the other side’s perspectives and reasoning. I hope that members of the club will receive the same benefits.”

Politics Club will also keep students engaged in politics by engaging with current events, especially as the election draws near.

Student founders of Politics Club are hoping that their activities get more students engaged in and excited about politics.

“We’re constantly berated by aggressive messaging. I can’t blame some people who aren’t very interested in politics for tuning out when they encounter this,” Zenkich said. “We want to tune down this aggressiveness and, hopefully, get more people involved along the way.”

New wave of students takes to the poll [workers]

For the first time, Nov. 3 is a non-attendance day for ETHS students, providing students with an opportunity to volunteer as election judges without having to worry about missing any class time. In suburban Cook County, any high school student over the age of 16 and a GPA greater than 3.0 can apply to be an election judge.

“I just think that, since this year is such an important election, and with the majority of poll workers being older and at high risk for COVID-19, it is important for the younger generation to step up and fulfill their civic duty to the country during these trying times,” senior Jacob Erhart said.

The process for becoming an election judge in Cook County starts by filling out an application and getting signatures from a parent or guardian and either a school principal or dean. Students that apply and get approved then have to complete online training to learn about the hands-on aspects of working at a polling place on election day.

“I have been so impressed with the number of students who are volunteering to be poll workers; I have been signing forms all summer and the fall!” Assistant Superintendent and Principal Marcus Campbell said. “When Evanston residents go to vote on Nov. 3, ETHS Wildkits will be well represented.”

Working as an election judge gives students the opportunity to learn about voting and see the process up-close and, after having hands-on experience behind the scenes, increases the odds they will vote in the future.

“You understand what goes into voting. You understand what goes into securing ballots. You learn a whole bunch of local election laws that you never would have understood before, and it really peels back the voting process,” civics and APUSH teacher Michael Pond said. “When it is your time to vote, it’s not as confusing. You’ve got the experience, you know what it’s about and what it looks like; you know how it works.”

Across Evanston, there are 26 different polling locations for in-person ballot casting as well as a secure drop-box for mail-in ballots located at the Morton Civic Center. High school student election judges have the potential to be assigned to a precinct polling location in Evanston, or within a different township in suburban Cook County.