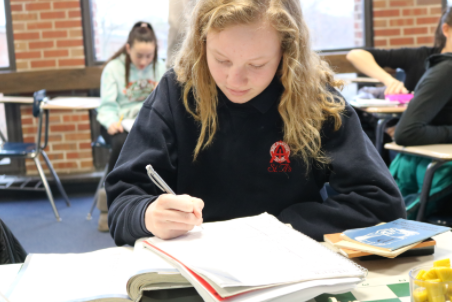 Although education and religion aren’t always intertwined, they once were for a large number of students.

Parochial schools are private schools that are affiliated with religious organizations. Religious schools from all over the North Shore feed students into ETHS and for many of these students, there are some key differences from their previous religious schools.

Gavin Woodward,  a Loyola Academy and Boston College alum, gives insight on being a student at religious schools, as well as being an adult in the system, as he is currently a Loyola basketball coach.

“A lot of values you learn get instilled into what you do outside the classroom,”  Woodward said. Loyola holds both mandatory and optional mass throughout the week.

“While having religious classes was interesting, I feel more open to new ideas at public school,” freshman Avi Shapira said.

In addition to having classes focused on religion, Woodward said one of the key differences was the diversity you get at public schools. He explains this diversity as “the beauty of public schools.”

Freshman Joe Lynk agrees commenting “I felt like when I was attending a religious school I didn’t get the real world experience that you get at public schools.”

This lack of racial diversity is not uncommon with parochial schools. According to the NCEA (National Catholic Education Association), 73% of the student body is white. ETHS, however, is only 44% white.

ETHS has integrated race and ethnicity into the curriculum to make all students feel welcome and appreciated whereas this is not a top priority for most private schools. Not having had the exposure to a wide range of religions cultures and socioeconomic statuses can produce a narrow view of Evanston.

There are key differences in the way parochial schools are run versus the way public schools that can make the transition unique for many students. For some students this transition was smooth, but for others it was not.

Sophomore Remy Joseph,  explained how the religious aspect of schools was almost overwhelming and how she felt so much more free at public school. Joseph states “Going to Saint A’s actually made me believe less in God because I learned about the strict morals, beliefs, and policies of being catholic. I was ready to get out of that environment, so my transition to ETHS was pretty smooth.”

Parochial schools teach the history,values and culture of their religion. For some people like  Joseph, this religious teaching can be considered too rigorous and can make one feel uncomfortable in an environment such as this.

Alicia Hart, Evanston’s New Student Transition Coordinator, deals with all of the new students coming in each year regardless of what class they are in. Hart said roughly 75-120 kids a year come from parochial schools every single year.

According to Hart, ETHS is doing a lot of things to try and get these new students comfortable before the school year even starts. One of these ways is an access class that can be taken in summer school. This class basically helps incoming freshman navigate the school’s, massive 65 acre campus before starting in the fall. Along with that, there are multiple freshman information nights to make the students feel a part of the school before they are even enrolled.

“When talking to students, they believe that they are having unique experiences coming from small religious schools,” said Hart.

The general consensus among students and Hart, is a very special transition coming from parochial schools. There are bound to be some challenges and differences in this transition, but students take on this challenge and are now active members of our ETHS community.