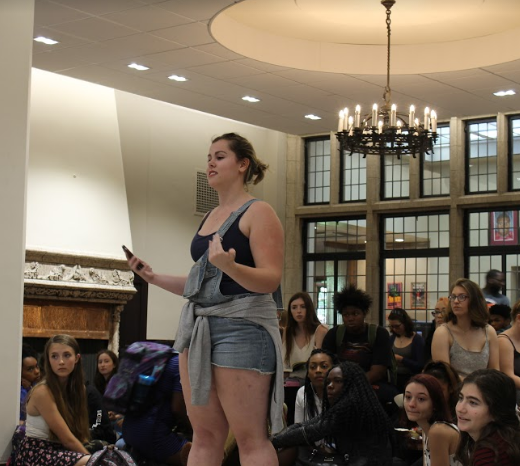 Although some people see Evanston’s dress code as a policy that ensures an efficient learning environment, senior Marjie Erickson saw numerous flaws in this system.

Erickson organized a protest against Evanston’s unfair dress code policies, that took place on Sept. 2 in the main lobby. She encouraged students of all grade levels to show support by coming to the protest and quietly sitting in the lobby, while she made her statement to the administration.

Erickson spread awareness of the event through a facebook page, which also allowed students to share past experiences and voice their opinions regarding the dress code.

One problem that Erickson saw was the overwhelming amount of girls who were dress coded, compared to the amount of boys. “Many boys are getting away with pants that sag or inappropriate shirts, but god forbid I have a shoulder.” Erickson said .

More specifically, dress codes target girls of certain bodies types and certain races. Some of these girls shared experiences on a survey that Erickson sent out to the facebook page. One of them explained that she was told to change her shirt because “her chest was too big.”

Additionally, Erickson and other protesters believed that the fact that girls were being forced to change into alternate clothing, so a boy won’t be distracted, was absurd.

“There should never be rules in place that shame women for the way men choose to objectify them,” said sophomore Isabella Miller, fellow protester. “If a boy is aroused by a shoulder, that is a bigger problem that needs to be addressed.”

According to The Huffington Post, dress codes put standards on how both girls and boys should act. It is saying that girl’s need to dress more respectively, and gives off the impression that boys cannot control themselves.

Before the protest, Erickson got an opportunity to meet with Dean Cynthia Bumbry  to discuss the issue. However, Bumbry told her that little could be done to change the dress code this year.

Despite this, the protest was a success. Approximately 200 students filed into the main lobby, sat, and protested alongside Erickson.

A few minutes before the protest began, Principal Marcus Campbell and Superintendent Eric Witherspoon agreed to meet with Erickson and discuss possible changes in the dress code.

“I really hope this opens up a conversation about dress code, but also lets students know that they can talk to the administration about what they believe in.” Erickson said. “I’m leaving next year and I want future students to think that if I can organize a protest, that they can too.”