Bands warming up for concerts in December 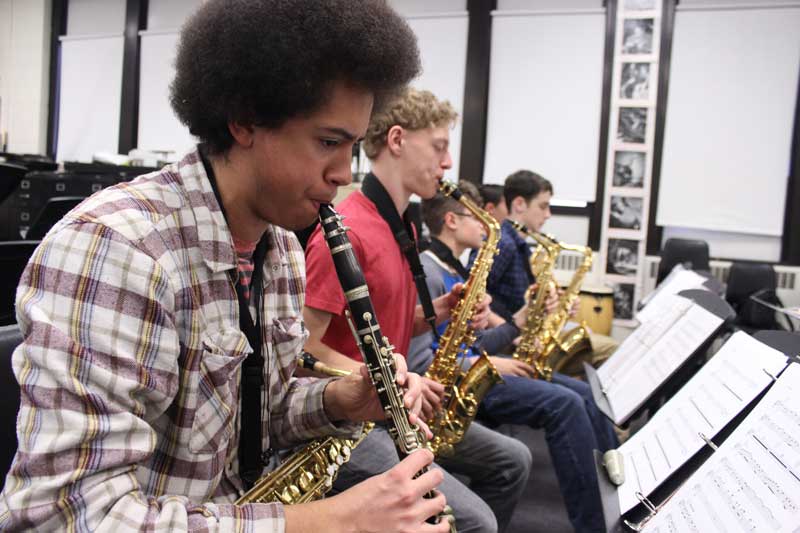 The weather outside may be frightful, but the music is delightful.

Various members of the ETHS music program will be starting off winter with a collection of musical performances.

“It will be a blend of everything,” says band director Matthew Bufis. “Some holiday tunes…standard repertoire, a good mix of all.”

The music filled month kicks off on Dec.9 with the Big Band concert in the Auditorium starting at 7 p.m. Big Band consists of three large jazz groups, Jazz Ensemble, Jazz Band, and Lab Band. “We model our Big Band off the great bands of 30`s,” says band director Mike Lehman. This will already be Jazz Ensemble`s fifth performance.   “Everything is accelerated; they are swinging harder than years past.” Big Band is composed of a larger group of musicians who work together to create seminal jazz. “Everybody is really talented in Big Band,” says senior Ensemble vocalist Olivia Prager. “Everyone is learning to work together and blend well.”

The Jazz Combo Festival will be on Dec. 15 at 6:30 p.m. in the Terrace. Jazz Combos consist of smaller groups of musicians performing music. “Combos will be performing standard tunes typical to the jazz genre,” says Lehman. Combos also learn to function as a whole through collaboration. “Once in groups, sections work together,” says junior trumpeter Seth Bearman.

“Band is bigger than recent years, the program is expanding,” says Lehman. The program has enlarged thanks to the large freshman class and popularity. “In past, when we perform in the lunchroom, people seem into jazz,” says Bearman.

“The program is growing in numbers with community outreach… more involvement, and more focus on getting students in elective classes,” says Bufis. The concerts being displayed offer up a look into the wide variety of talent present in the school as well as deliver the opportunity to listen to renowned music. “It brings the community together for holiday spirit… a great chance to hear standard jazz and classical repertoire,” adds Bufis.