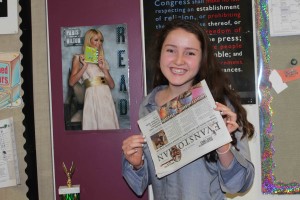 Mock Trial will be heading to State this weekend at University of Illinois in Urbana Champaign.

“There are over 40 teams that go to State, and we are usually in the top eight every year,” said captain Max Goldsmith.  “I’m expecting us to place around the same this year.”

“If we perform at our best, then we definitely have the potential to be in the top eight again for State this year. We have a lot of people who competed in State last year going back this year,” said Cate Rudy, junior.

According to Goldsmith, the team’s biggest competition is Hindsdale Central and Timothy Christian High School.

“I would much prefer to compete against the hardest school in the state than the weakest school,” said coach Alison Chiaro. “You always rise to the occasion when you go against the tougher school.”

“This year’s team is really solid. I am just afraid that the nerves will get to us and we will miss important information,” said West.

In preparation for State, the team competes in seven tournaments throughout the year, the most recent one was on Feb. 22.

“We competed really well against Hindsdale, but did not place top three,” commented Goldsmith.

To prepare further for State, Chiaro organized a formal scrimmage against Highland Park on Feb. 25.

“Highland Park placed third in one of their top tournament this year,” said Goldsmith. “We faired really well against them at the scrimmage.”

According to Goldsmith, this year’s case is based on the historical event between a fictional character, Jersey Johnson and CBS News.

“I think the case is really interesting,” said West. “I think it’s much harder, however, to be on the plaintiff’s side.”

“This year’s team is really strong,” said Chiaro. “We pulled together such a talented group of people that have showed a lot of dedication and have a lot of depth—that is really exciting.”