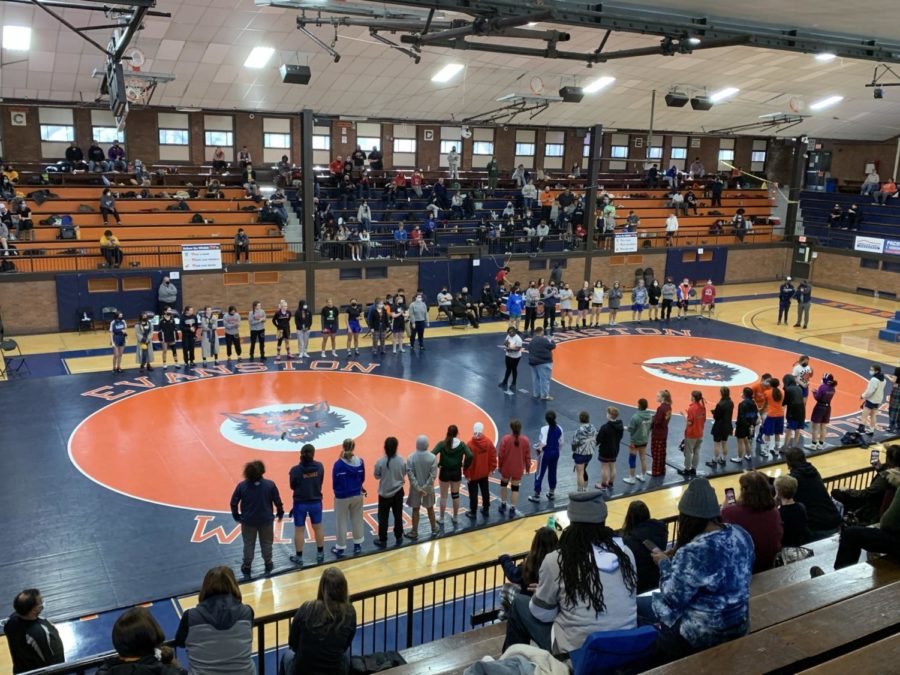 “We’ve had a history of girls on our wrestling team since the 90s,” says Athletic Director Chris Livatino.

But up until this year, girls wrestling was never offered by the IHSA as an official sport. In fact, while wrestling has technically always been offered as a coed sport, girls tended to be significantly outnumbered on
high school teams, which led to reduced participation. Because of this, the IHSA was convinced there just wasn’t enough interest in girls wrestling for it to be sanctioned—until now. As it turned out, the sanctioning of the sport was exactly what needed to happen for its numbers to rise. This year at Evanston, a grand total of 11 wrestlers came out to join the team —the most in school history.

“We’ve always had a good tradition of having strong female wrestlers [but we’ve never] had double digit numbers. We always had like three or four or five, maybe six girls,” says Livatino.

Because of what was happening in girls wrestling this year, Sports wanted to document just exactly how and why the sport becoming official led to record-breaking participation. In our efforts to write this piece, we attempted to reach out to each of the 11 members of the team and were able to interview eight of them. Without any further ado, the Evanstonian would like to introduce the inaugural ETHS girls wrestling team.

Senior Carmen Tracy-Amoroso had wanted to join wrestling ever since her sophomore year. However, she opted to play club water polo instead that year, and last year, when wrestling was held in the spring, it conflicted with ETHS water polo. This year, though, girls wrestling becoming an official, school-sanctioned sport, which provided Tracy-Amoroso with the perfect opportunity to join.

Despite her prolonged interest in the sport, still, joining the team didn’t come without its surprises.

“I wasn’t expecting girls wrestling to be as hard as it was,” she states. “It’s a very intense sport.”

But through perseverance, hard work and dedication, Tracy-Amoroso was able to accumulate a number of individual wins across her season—and with no prior experience. Her first win stands out as particularly memorable.

“Definitely winning my first match was a highlight,” she explains. “Everyone on the team was so happy for me. I walked off the mat, and three people hugged me.”

Tracy-Amoroso also credits a unique camaraderie among not only the girls wrestling team, but female wrestlers in general as helping make her experience worthwhile.

“When we have the only girls tournaments…that’s nice because it’s just a whole gym full of female wrestlers,” she describes. “I got the Snapchat of one girl I wrestled and won [against]. She was so sweet.”

In the end, Tracy-Amoroso’s first and last year as a member of the girls wrestling squad turned out to be nothing if not a positive experience.

“I would do it again next year if I was not graduating.”

Sophomore and co-captain Priscilla Hartwell’s older brother, Josh Hartwell, had wrestled all four years of his high school career. But it wasn’t until fellow co-captain Ariana Flores sent the younger Hartwell a text asking if she would join the team that the Hartwell name could once again be found on an ETHS wrestling mat.

“If it weren’t for those two people, I most likely would have never wrestled,” says Hartwell.

When Hartwell first stepped into a wrestling singlet, she ended up finding a community of devoted and hard-working individuals. Above all though, the support Hartwell received from her coaches and teammates was what defied her expectations most.

“The team has been supportive and has been the best team I could ever ask [for], which is a reflection on Coach Salinas and staff and the culture they inspire within the wrestling room.”

In fact, Hartwell says this support increased as the season went on, and even helped keep her nerves at bay during her first competition.

“I think my favorite moment this season was our very first meet. I like to think everyone was nervous and that it wasn’t just me. I remember just feeling the support of everyone— win or lose, you had the team to help you through. As the season went on, that feeling only got bigger.”

Despite having her season halted due to a positive COVID-19 test, as well as a personally disappointing performance at Sectionals, Hartwell looks forward to being back and better than ever next season.

“I can’t wait for next season, and I hope that more girls will join. I want to come back because the people in the room push me to be the best I can be. I also love that as much as it is individual, you are still a part of a team. The other great thing is that, if you want to go far, the support you need is there, all you need to do is grab it.”

A powerlifter and bodybuilder outside of school, junior Ashland Henson had never played any ETHS sports. This year, though, she decided to join the girls wrestling team, but only after a period of lengthy contemplation.

“At first, I was hesitant to join because all the girls already knew each other, and I was afraid I wouldn’t fit in…I debated for a couple of weeks, [and] then decided to pull the trigger,” Henson describes.

Despite her hesitations, which were amplified by her joining the team late, Henson didn’t find much difficulty feeling like she belonged as a part of it.

“The second I walked in, the girls were all so kind and welcoming,” she explains.

Even with only about a month of wrestling under her belt, Henson felt that her improvements were hard not to notice in the postseason.

“Sectionals was only my second tournament, so obviously, I was a little stressed. Though I didn’t get as far as I would’ve liked to, I saw a lot of improvements from my previous matches.”

Beyond her personal accomplishments though, it was the people she met and friendships she made that helped her gain newfound confidence as a wrestler.

“Highlights for me were seeing my improvements—from not knowing anything about wrestling a month ago and then competing and seeing how far I’ve come, [but] building new friendships was also a huge plus,” Henson states. “I met some great people, and was happy I got to spend this season with them.”

According to the Evanston RoundTable, “Girls have the option of competing against girls or boys–or both–during the regular season but will have to decide in February which state series they want to compete in. They’re not allowed to grapple in both sets of tourneys.” Basically, per the IHSA, girls can still choose to wrestle boys if they want to.

When freshman Coco Herro first joined ETHS wrestling, that’s exactly what she decided to do. She only joined the girls team around the start of second semester, after her coach encouraged her to switch due to an injury.

“My last match on the boys freshman team, I got hurt and couldn’t practice for two weeks…and [my coaches] didn’t want to see me hurt again,” says Herro of what led to the switch.

Once she made her way onto the girls team, Herro found herself part of a completely different world.

“When I joined the girls, it was a whole new experience for me; it was more intense, hard-working and more serious,” she explains.

But in the end, it was a world that she found herself immersed in.

“Before wrestling, I didn’t really do any other sports, because nothing felt right for me,” she says. “But now wrestling is my sport and I love it.”

Though Herro described her showing at Sectionals as “good,” she personally believes that it could have been better. As a result, she plans on dedicating herself to the sport even further next season.

“I will work twice as hard next year when I wrestle again.”

Senior Alize Ramirez loves trying new things, so when her gym teacher approached her about wrestling for ETHS, she jumped on the opportunity.

“I joined because my gym teacher recruited me, and I’m glad I did because I really like the sport.” Ramirez says.

Ramirez has proven to have great raw talent and dedication, making it to state in just her first year participating in the sport. Her competitive style is both personal and applies to her love for her teammates.

“I’m always asking how can I improve myself? And how can I help my teammates?” Ramirez says.

Her ability to push herself and her teammates is due to the closeness within the ETHS wrestling community.

“Our team is like a sisterhood, and the whole wrestling team treats you like a family. I felt welcome the first day.”

Despite this being her only year wrestling for ETHS, Ramirez is committed to helping the girls wrestling team long term.

“We have a lot more to come in the following years, but we have proved that we are not to be messed with.”

Ariana Flores started wrestling in the summer of her eight grade year. Over the years, she had tried many sports, but by the time she was 12, she was taking lessons in jujitsu at a local dojo. The dojo she attended hosted a wrestling clinic, and she immediately gravitated to sport. She has been wrestling ever since.

Flores is now a junior at ETHS and is as in love with wrestling as when she first discovered it.

“[I]was incredibly excited for a new opportunity and beyond grateful [ to know that there would be a girls wrestling team this year,]” Flores says.

She has lengthy goals for herself this season including placing at state, and she feels it is truly possible to achieve her goals with the support of her coaches and teammates.

“My teammates are incredibly supportive and welcoming, and the coaches are always putting in the effort to make us all feel welcomed and supported.”

Sophie Brown is as new to wrestling as the girls team is to our school.

She was inspired to try out the sport this year after learning about it in gym class. She felt it would be a great way to keep herself active during the winter months.

“It seemed like such an interesting and fun sport,” Brown says.

When finding out ETHS had a team specifically for girls, Brown was excited to know that she “wouldn’t be the only girl interested in wrestling and that [a girls team] would be an option for us.”

She is also really appreciative of the fact that the team and the coaches are so supportive and are committed to become better people and getting better every day in practice.

Senior Morgan Heffernan has had a tough season. Due to a knee injury, she has only been able to complete in one meet. Her limited ability doesn’t stop her from supporting her teammates.

“Since I’m injured right now, I can’t really do much, but I’m still there, cheering them on at meets.” Heffernan says.

Despite her lack of competition experience, Heffernan has developed a love and appreciation for the sport. “I like wrestling because doing something different is a lot of fun. It’s so different from the other sports I’ve played.”

Heffernan is glad for the diversity that ETHS has displayed by creating a girls wrestling team.

“So many teams we wrestle against don’t have girls,” Heffernan says, “so it makes ETHS unique.”