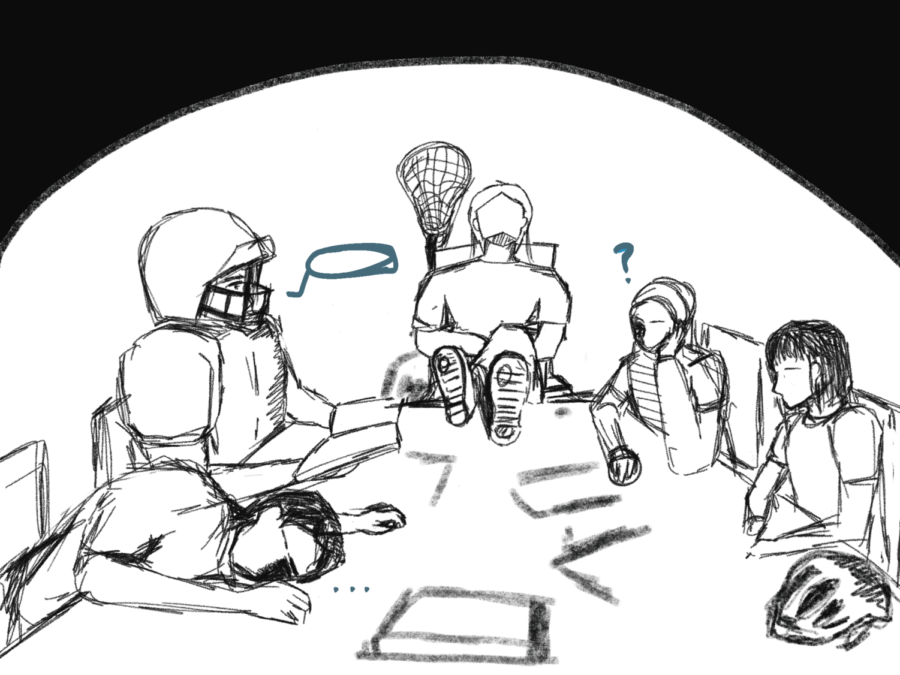 Across Illinois, the ETHS athletic department is accredited with being one of the most supportive, enriching resources out there for student-athletes. In fact, its own mission statement reads, “All student-athletes will represent and support ETHS with class, sportsmanship, humility and passion as they strive towards excellence in academics, athletics and life.” So how is it that a department, whose sole purpose is to ensure that its athletes perform well in life, has managed to interfere with academic success at almost every opportunity?

It all comes down to reputation—the desire to be the greatest school that has the most well-rounded, athletic students. With a $2 million yearly budget—twice the funds allocated to social work, and four times the amount provided for academic supports—it’s clear just how important athletics is to ETHS, and just how often that importance supersedes academic achievement.

But it’s not just money. Only two days after Christmas, while COVID-19 cases were at their peak and students were left wondering what school would look like upon returning from winter break, the girls’ basketball team played in the Morton holiday tournament. A day later, on Dec. 28, the boys’ team played in another tournament, and from there on out, sports were running as usual.

Athletic director Chris Livatino explains why the department felt it necessary for sports to return following the adaptive pause.

“It would’ve been easy for administrators to just say well, nothing’s going on over winter break anyways, we’ll call it three weeks off, and that would have been devastating to all of our winter sports that practice,” Livatino says. “The season doesn’t stop during winter break. Maybe [for] the lower level kids, sometimes it does, but for varsity kids, you’re going as hard, if not harder, over winter break. And so, if you took our kids out for that two-week period, it would have been really detrimental to their success in the competitiveness of their sport.”

That a two-week break would have been detrimental in terms of wins and losses is certainly true. Yet, the issue here is that a sports team was named responsible for the core outbreak that ultimately led to the adaptive pause. If it wasn’t safe for kids to attend school, then it certainly wasn’t safe for highly transmissive activities—that already led to one outbreak—to continue throughout break; school and safety should always be seen as the priority over athletic success. But, unfortunately, athletes were not held to the same caliber, and, on Jan. 14, the COVID-19 dashboard reported its highest rates of infection at 311 confirmed cases.

Even so, this dilemma doesn’t start or end with how the athletic department handled their COVID-19 response. It’s always been difficult for student-athletes at ETHS to balance sports with academics—a problem the pandemic only amplified.

“Balancing sports and school can be very challenging, at least for me. Considering you have around eight hours of school, around two hours of practice or games, homework, as well as sleep every day, it can get very draining,” varsity basketball player Alyssa Williams notes. “A lot of the time during the season, I find myself very sleepy, but even though it is challenging, it is manageable.”

Still, it shouldn’t be so much more challenging for athletes to succeed academically during their sport’s season. If a student has to pick between school and sleep, because of pressures placed on them by their sport, there’s obviously a larger problem at hand.

“I have seen a few teammates struggle. I have also struggled with keeping up with school and my sport,” Williams elaborates. “It has been very hard to catch up on schoolwork if I start falling behind, while keeping up with my sport and the incoming work.”

Fortunately, the school does have some supports in place for student-athletes. Between eligibility requirements, reinforcement from coaches, and academic study table vouchers, it’s clear that the academic success of student-athletes is of importance to ETHS. But, in many cases, these supports aren’t enough, and the culture of athletics continues to interfere with a student’s academic capabilities.

“While not in season, a lot of the time, my grades are a lot higher because I have more time to study, sleep and take care of myself,” Coutre explains. “But I feel like people don’t care that I’m not doing as good [academically] as I should, because I’m doing good at my sport.”

However, it’s not just the athletic department at the root of this problem. Families want their students to be the best athletes they can be, and students often find themselves feeling more secure in their sport than in the classroom.

In fact, most coaches and athletic officials do make efforts to prioritize academics.

“Our coaches encourage us to keep our grades up, and the standards this school sets for athletes’ grades keep me accountable,” Williams affirms. “Personally, I strive to keep my grades up, so I can compete.”

But, despite how much coaches and the athletic department want their athletes to be successful, in far too many instances, this just isn’t possible. Too often are students forced into choosing between sports and academics, and too often do they feel pressured into picking sports. ETHS is a school first, and an opportunity for athletic enrichment last, yet athletics continue to shape academics, instead of the other way around. Thus, until a significant shift is made in the culture of athletics, the academic performance and wellbeing of student-athletes will continue to pay the price.