Dedicated and driven: Lily Consiglio in, out of the pool 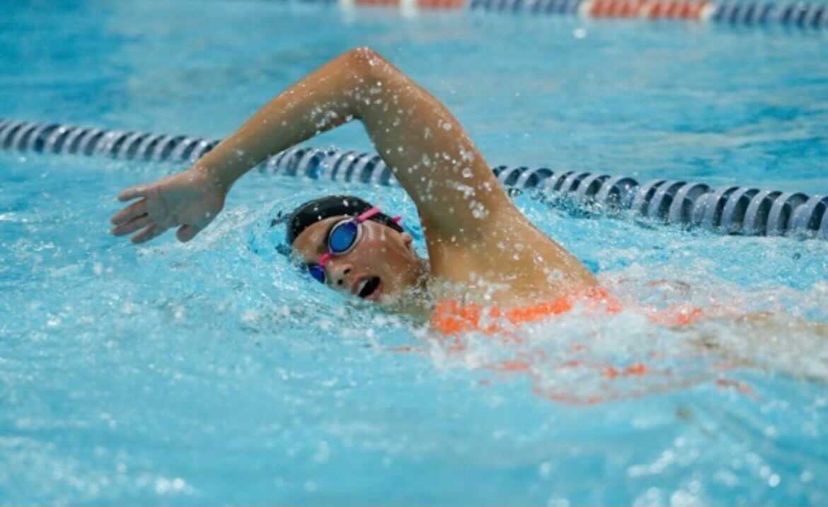 Senior Lily Consiglio has committed to Emory, the best collegiate fit for her as a swimmer and student.

Starting with daddy-daughter lessons at the age of two, swimming has always been an important aspect of Consiglio’s life. However, it wasn’t until making her first regional qualifying cut at the age of 10 that Consiglio realized how much swimming could mean for her.

“I was kind of like, ‘Oh, there’s more to swimming than just laps. I can actually go somewhere with it,’” Consiglio explains. “And then I realized I’m a really, really competitive person, in the pool and out of the pool. Sometimes, it’s kind of an unhealthy thing, but sometimes it’s good, because it fuels me to go faster.”

In spite of her competitive nature, Consiglio prioritized her best interests above the expectations of others during the college recruitment process. Although Emory is Division III and not as athletically acclaimed as most Division I schools, Consiglio believes she will have more of an opportunity to grow as a swimmer and pursue her academic ambitions at Emory.

“I had to think about what was best for me,” Consiglio remarks. “If I went DI, I wouldn’t really get to compete at the national level as much because it’s so extreme, but if I go DIII to Emory, they’ve won their national championships for the past 10 years, so swimming is a really big thing at their school.”

In fact, as the top Division III women’

s swimming program, Emory has received 206 UAA titles and won 12 NCAA championships—recently even producing Olympic Gold Medalist Andrew Wilson. Outside of its top-tier athletics, Emory is ranked as the 21st best higher education institution in the country: making it the right choice for Consiglio academically.

“There are a couple other schools I was looking at that were similar with how rigorous academics were, but one thing I’m interested in studying is journalism,” Consiglio says. “Specifically, Emory has a media studies program which is journalism and media studies. I’m also in AP Photography, so I could do something with that there, which I think would be pretty interesting.”

Currently, Consiglio is ranked as the 18th female swimmer in Illinois for the class of 2022. Last season, she was a three-time finalist at IHSA sectionals—finishing second in the 50-yard freestyle, second in the 100-yard butterfly and fourth in the 100-yard backstroke, picking up state-qualifying cuts in the two former events. Unfortunately though, no State Championship was held last year due to COVID-19.

Consiglio’s success in the ETHS swimming program has gone on to serve as a beacon of inspiration for underclassmen. Now a co-captain, Consiglio is able to use this prowess to lead and counsel the other girls.

“Lily is honestly one of the nicest people I have ever met,” sophomore swimmer Ruby Fairman notes. “She really cares about all of us, and seeing her do so well and put so much effort into her swimming makes me want to work harder too.”

It’s not just younger swimmers like Fairman that recognize Consiglio’s dedication to ETHS swimming. Athletic director Chris Livatino reflects on what her commitment to Emory means for the future of ETHS athletics.

“The history and the legacy of the swim program in Evanston is one of the best swim programs out there,” Livatino says. “And, so, I think the legacy that Lily brings is ‘that’s still who we are,’ and that ‘we’re still a phenomenal program.’ And it just inspires the next kids that are either in the program, maybe freshmen and sophomores or younger siblings that haven’t quite got here yet to go to the meets and see her to feel like, ‘Hey, that can be me someday.’”

While many of her peers and mentors are nothing but awestruck at her skills as a swimmer, Consiglio still holds a modest perspective on her influence.

“It’s just weird, because it feels like, not that long ago, I was in the position where I looked up to other people,” Consiglio expresses. “It’s a little bit nerve-wracking, because you don’t want to mess up, and you want to make sure you’re a positive influence, but it’s exciting to know that people look up to you and that what you’re doing matters a lot to others.”

After graduating from ETHS, Consiglio will have to say goodbye to the familiarity of ETHS swimming. But with a new coach, new teammates and a renowned swim program at Emory, Consiglio has a lot to look forward to.

“Starting fresh is kind of weird, because I’ve just been here for so long, especially my club team,” she describes. “I’ve been with them since I was two, [and] they’re all like my family. But I think Emory is the same way, and I think that after no time at all there, they’ll feel like my family too, and then I’ll have two families.”

Consiglio already experienced a taste of this new, close-knit family energy after posting news of her commitment to Instagram. Within hours, she had received about 10 different direct messages from current Emory swimmers, letting her know just how excited they were to have her on the team.

Going forward, Consiglio has a lot planned for the next four years of her life, and even beyond.

Regardless of whether she’s quite ready for the Olympic Trials yet, Consiglio has had quite an impressive swim career thus far. This, however, did not come without roadblocks or difficulties along the way. Between altered seasons due to COVID-19 and a recent injury putting her out of commission for weeks, Consiglio had to work through a multitude of challenges to rise to where she’s at.

“I would get up at 5 a.m. and drive through the snow alone in the dark and cold, and then get in the pool, get out, not talk to anyone, come back, and sit online on my computer for hours,”
Consiglio tells of last season’s adversities. “And then it was just hard to find the motivation to keep doing that.”

Much of Consiglio’s perseverance through the difficulties of last season can be accredited to her determination and optimistic essence. After 15 years of swimming and four daunting years at ETHS, Consiglio describes the advice that helped her build such resilience.

“You can always do more than you think you can; you always have a little more left in the tank, [and] if you’re exhausted from school or swimming or whatever sports and social activity, you can keep going. You really can.”