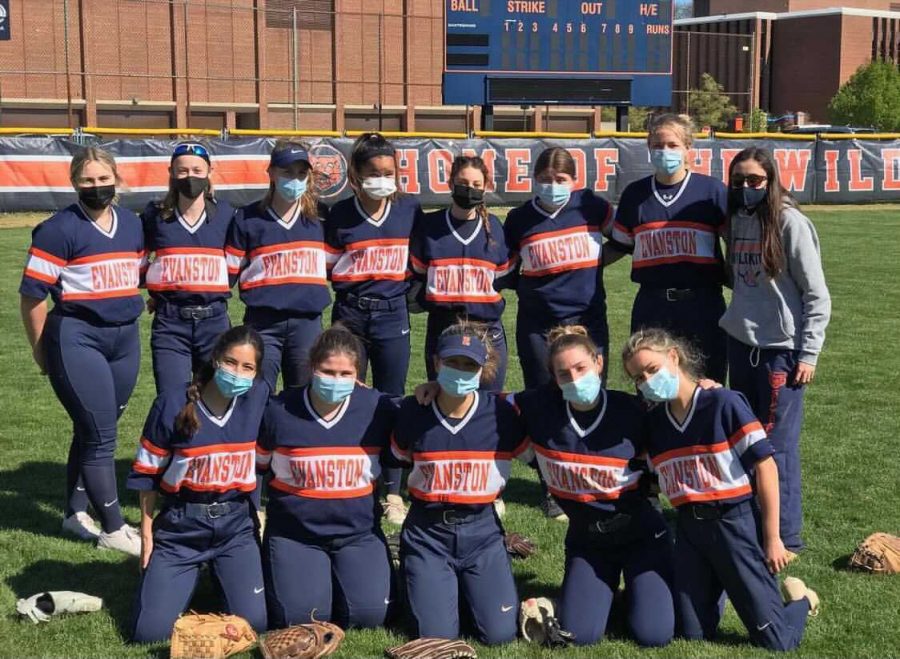 As ETHS’ baseball team went head-to-head with Whitney Young to kickoff their playoff run at home, 15 miles south, on the very same night and against the very same school, the Kits’ softball squad kicked off theirs as well. Finishing the regular season with a 9-11 record, just one win short of .500, it was sure to be an uphill climb for the Kits in their battle against the Dolphins, a team that had collected a staggering 30 wins on their season.

And sure enough, it was. Whitney Young’s Shelby Jacobson, who is committed to play at the University of Wisconsin-Madison next spring, struck out 17 Kits in no-hitter fashion, leading to a Dolphins’ rout, 8-0.

“Whitney Young has a great reputation when it comes to softball. They’re on the rise, and we were very aware of the talent they had throughout their lineup,” says Class of 2021 senior Chloe Haack. “We had nothing to lose playing them, and that was our mindset the entire game.”

While the effort did come up short, the result was by no means a failure. For one, the Kits were able to close the gap on the Dolphins since the last time they had played them, a double header back in April. On that day, Evanston was beaten 14-2 in both contests, which were ended early due to the slaughter rule. Those losses were also against one of Whitney Young’s backup pitchers.

In addition to keeping things close on the scoreboard, Evanston saw, sophomore pitcher Serafina Goodwill strike out a total of eleven batters during the sectional contest against the Dolphins. Her performance in large part was responsible for the Kits holding Whitney Young scoreless until the fourth inning, and, despite the loss, was a more than stellar way to cap off her first season with the team.

Goodwill’s walk in the 4th inning was also one of just two baserunners for Evanston that night—the other being senior Katie Patton, who walked in the second—and her stolen base was the team’s only one of the night. Though Goodwill’s future with the team remains unseen, performances such as these sure do indicate a bright one for the young player.

“Serafina has improved throughout the year as a pitcher and all-around player, as she plays multiple positions. She had a strong season as a freshman, earning all-conference accolades, and she excelled during playoffs. She will continue to be a leader in the program, and we look forward to seeing what this year brings,” says Head Varsity Softball Coach Amy Gonzales.

In terms of season highlights, Class of 2021 senior slugger Haack tied the school’s home run record with nine four-baggers, sending not just one but two over the fence at the May 21 game against Glenbrook South, a 13-12 hard-fought loss. Dual wins against New Trier, with final scores of 9-3 and 13-11 respectively, also kept Evanston’s winning streak against its longtime rival since 2017 alive.

“We had seven seniors who helped lead a young group of players. We had a group of freshman, sophomores and juniors who contributed and helped lead the team to a successful season,” Coach Gonzales added. “I think that the players did a very good job.”