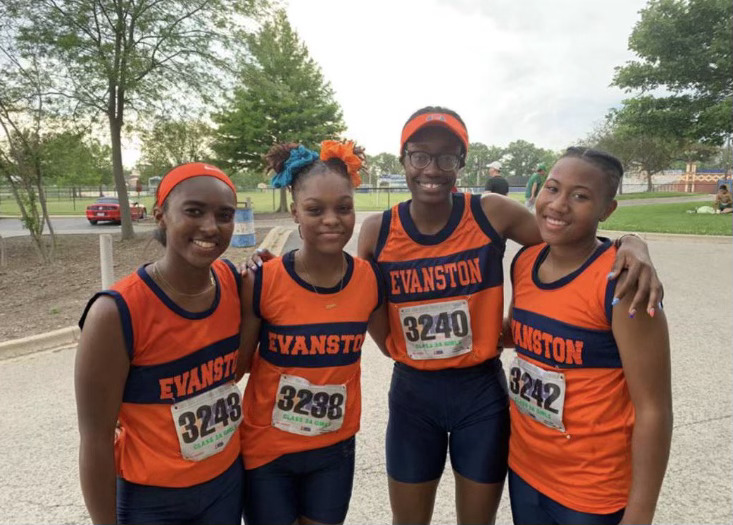 The ETHS girls track and field team has standout individual athletes, but by clenching the 4×200 relay they showed how strong their united team can be.

Senior Jacklynn Okereke stated that of all her races thus far, winning the relay with her fellow teammates was the most rewarding.

Leading up to their championship relay win, the girls track and field team was focused on conditioning and building their strength. While rigorous, the outcome of this cross-training was successful.

“I think the track season went well this year. Practices were a bit more challenging because we were lifting heavier weights more often, but ultimately that helped with injuries and shin splint flare ups,” Okereke said.

Additionally, focusing on growing their mental state was a vital aspect of their stellar season.

“I’m extremely proud of what we accomplished at state; our confidence in our abilities and the effort we put towards training when covid shut everything down was reflected in our performance that day,” Okereke expressed.

Now, entering the 2021-2022 track season, the team is planning on increasing their strength training and emphasizing drills that helped them attain their victory this past year.

“Next season I’m looking forward to lifting more heavy weights for my entire body and building my endurance further.” Okereke explained, “two goals I’ve set for myself are to strengthen my hamstrings because I had some injuries and thinking more positively during hard workouts.”

Furthermore, Okereke stated that the team is now looking toward more events they can dominate such as the other relay races.

“One [goal] is probably to win the 4×400 meter relay at state and to increase flexibility,” Okereke concluded.