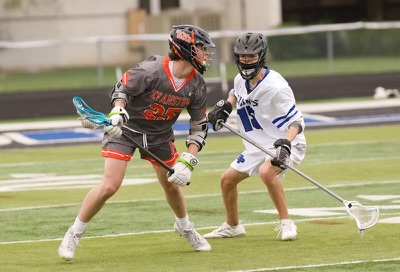 Photo courtesy of Will Coutre.

With their last season canceled by COVID-19, the ETHS boys lacrosse team was ready to get back on the field and “lax to the max.”

The Kits’ season had a rocky start after back-to-back non-conference losses. Despite limited opportunities to practice, Evanston pulled itself together and won its third game against Vernon Hills—just the first of many wins for the team over the course of the season. In the end, Evanston finished their regular season with a 9-7 record.

“A big highlight for our team was our win over Glenbrook South the first time we played them,” senior Will Coutre noted. “The energy was electric.”

A 10-6 win, the game was certainly one of the Kits’ best performances of the season. However, the biggest blow-out this year proved to be against Deerfield: a score of 10-1.

The implications of COVID-19 definitely made this season more challenging than their preceding one. In 2019, the Kits finished second in the Central Suburban League; this year, they finished fourth out of nine teams.

“This year, we’ll ideally be allowed more time to practice as a team in the offseason,” Coutre remarked. “We already started with off-season training as soon as this last season ended.”

By the time playoffs came around, the first round game against Lane Tech went flawlessly, resulting in a score of 14-7. Against Loyola Academy, however, Evanston wavered and lost, 19-7. That contest knocked the Kits out of the playoffs and finished their season for good.

While ETHS took a step back from its 2019 season, where the squad finished 11-6, there is still reason for optimism. With more opportunities to practice during the offseason, a standout senior class, and team traditions set to return to normal, the Kits are on the road to having one of their greatest seasons yet.