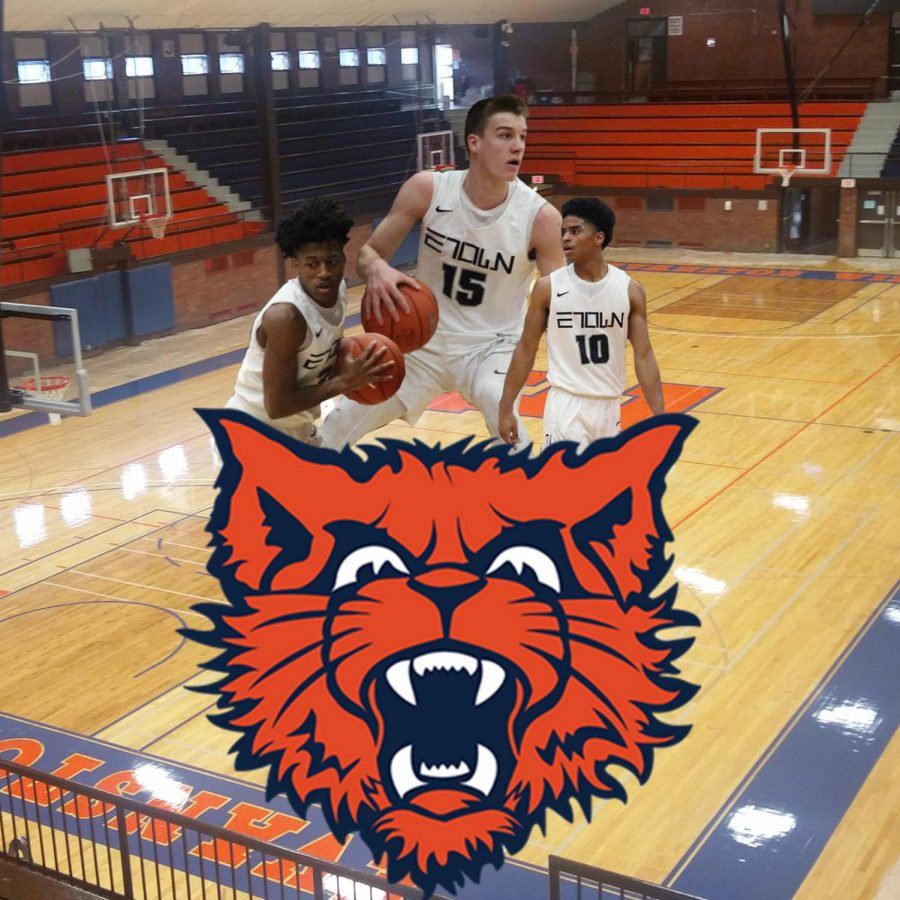 Evanston basketball, like everything else in the world, was drastically altered by the coronavirus pandemic, which overtook our lives a year ago. Now, back on the court, the Kits will enter Beardsley Gym for the final time of the season at 7 p.m.

ETHS (14-2) faces Maine South (12-9) in a game that will decide if Coach Mike Ellis and the Wildkits will win or share their 7th consecutive CSL-South title, which would earn their bid in the Chipotle Clash of Champions.

Without a state playoff, the Chipotle Clash of Champions serves as an alternate way to give one team bragging rights, as eight of the area’s best teams, including AP’s top three teams, will battle in a two-day tournament this weekend.

In order to get there, though, the Kits will have to beat the Hawks in a rematch from last week, where Evanston came out with a 54-52 triple-overtime victory, and Blake Peters became Evanston’s all-time leading scorer.

With the season on the line tonight, it makes you wonder… How did the Kits get to where they are now? What events in the last year have led to that? What’s contributed to the successes of this season? What about the disappointments?

A 365 day timeline:
March 12, 2020, an abrupt halt: March 12, 2020, was when the pre-COVID-19 nightmares began turning into reality. Nobody knew it would affect us to this extent, and nobody thought we’d still be living with its consequences a full-year later, but here we are… for Evanston boys basketball, coronavirus completely changed the last two years for the class of 2021, one that showed limitless potential and could very well have made it back downstate for the third and fourth time in a row.

On that eerie Thursday, Evanston was lined up to play the defensive-juggernaut Loyola Ramblers for a sectional title in a game the next night. However, the game was never played; after initially stating that sectional matchups would only have 60 attendees, IHSA cancelled the remainder of the season due to COVID-19 concerns.

“We really felt like we could go to another state final,” then-junior Blake Peters said. “We were excited to get the opportunity to avenge our loss against Loyola, and I know we were all looking forward to that, but we, as a [then] junior class figured this season would be pretty normal.”

Sadly, that presumption couldn’t be further from the truth…

July 29, 2020, losing a key piece: Many of Evanston’s top talents suited up in uniforms that weren’t orange and blue, cited by Joe Henricksen’s Evanston decade report, but more devastating than losing out on a prospective player, is a star leaving the team. For senior Jaylin Gibson, it made sense; the 6’4” swiss-army-knife, who recently committed to Mount St. Mary, was uncommitted at the time, and moving to Texas, where he knew he’d have a full season, makes plenty of sense in my eyes. Quite frankly, the fact that he did receive an offer after moving, one he accepted rather quickly, shows that the plan worked out. However, this was a devastating blow for ETHS. Losing a do-it-all guard  who could defend all five positions well, on top of being a great scorer when attacking the rim, isn’t exactly ideal.

Aug. 5, 2020, one step back, one step forward: Following Gibson’s departure, Evanston was left with holes. Gibson was the primary ball-handler for the Kits, but that wasn’t an issue, as fellow seniors Elijah Bull, Isaiah Holden and Peters were all more than capable of playing point. The real issue was the hole it left the Kits with inside, as Gibson thrived defensively in the paint. However, just one week later, 6’8” forward Ola Ajiboye announced he was transferring to Evanston from Von Steuben and has been a solid rim protector for the Kits when on the floor.

“When he tweeted that, we all thought it was over,” Peters said.

Thankfully, O’Brien was wrong. Nonetheless, given O’Brien’s reputation and credibility, the tweet went viral throughout social media, and most believed he was right.

Jan. 21, 2021, hope is regained: On Friday, Jan. 21, the Illinois Department of Public Health and Governor JB Pritzker announced that all high school sports will be played this year in regions that are in ‘Phase 4,’ just one week after O’Brien’s tweet. However, Evanston wasn’t in Phase 4 at the time, and in order to enter Phase 4, the test positivity rate needed to drop by a quarter. While that didn’t seem too likely given the virus’ trajectory, it happened, and Evanston would be allowed to play a season, albeit restricted to games against opponents in a 30-mile radius, and no state playoffs. Regardless, Illinois let the kids play.

Feb. 15, 2021, postseason tournament, and guac isn’t extra: 11 months after the Loyola game was cancelled, Evanston was one of eight teams invited to play in the Chipotle Clash of Champions. It meant that after their postseason was cut short the year before, and this year’s was looking to be prohibited, the Kits had more than a conference title to play for. But this is where things get interesting…

Feb. 21, 2021, all class from Ellis: less than a week after announcing their invitation and participation in the Clash of Champions, Wildkit coach Mike Ellis made the classy, selfless and courteous decision to put their spot up for grabs to the winner of the CSL south division (if tied, Evanston would play in tournament). Evanston were the favorites to win the division, but it wasn’t going to be a walk in the park at all.

Feb. 26-27, 2021,  split series with GBS: After losing game one, and winning game two, of a back-to-back matchup against GBS, Evanston showed that they had what it takes to beat great teams, but also lacked discipline at times. One key difference from both games was Peters’ production from the perimeter; Although he tallied 24 points in the first matchup, he shot 0-of-8 from beyond the arc and only made one in his previous two games. Despite this, he remained unfazed, in typical Blake Peters-fashion.

“My 3-point shooting is definitely down this year, but I’m not really worried about the percentage. I’m not keeping track of it, in the past I sorta have, just because that was my primary role, to space the floor and hit shots,” Peters said. “I’ve just learned to be persistent, and I have to understand that the shots will fall for me”

Ellis didn’t attribute the loss to Peters’ coldspell, though, as Peters did a lot of the dirty work inside, something he’s worked on knowing he’d have to step up in Gibson’s absence. Instead, he thought his team was simply outplayed.

“We just have to be tougher. I thought [GBS] played with more poise and toughness. They came into our backyard and outplayed us with that poise and toughness, especially in the last two quarters,” Ellis said following the game one loss.

The next day, though, the Kits were firing from all cylinders, and Peters’ persistence paid off, as he tallied 28 points, sinking 6-of-11 three-point-attempts en route a 68-54 win, putting Evanston atop the CSL South again. This meant that the Kits would guarantee a spot in the battle for the burrito if they win out in conference play, and if they lost, they would need a Glenbrook South loss as well in order to stay alive.

March 5-6, 2021, control no longer with the Kits: Due to splitting the back-to-back matchups against New Trier, Evanston slipped out of the driver’s seat. With Ajiboye and 6’5” sophomore Prince Adams being unable to play, the Kits were bruised inside by the Trevians in both games. After beating the New Trier 64-57 thanks to a phenomenal shooting night for the whole team, the offense was nonexistent the next day, falling to the Trevs, 35-34. This meant the Kits were no longer in control of their destiny, and a Chipotle Clash of Champions berth wasn’t possible unless Glenbrook South lost their last conference game of the season, where they’d face off against New Trier.

March 8, 2021, the only time ETHS roots for NT and Trevs win in MIRACULOUS fashion: In order to make the Clash of Champions, New Trier had to beat GBS, that way both the Kits and the Titans would have two conference losses, and Evanston would have to win tonight’s game against Maine South. It wasn’t looking pretty for New Trier, who was playing spoiler for Evanston two days before and now looked to save them. They were down, 36-14, in the second quarter, and their chances looked grim. At this point, Peters and the Kits had a practice and were unable to see most of the second half consequently– they thought it was over given the Titans first-half dominance, but the second half was nothing shy of miraculous; New Trier played phenomenally, executing their 1-3-1 defense to perfection, forcing turnovers and scoring with ease. The Trevs came back from their 22-point-deficit and beat Glenbrook South in a 64-63 nail-biter, saving Evanston’s season while the Kits thought it was over. This leads us to tonight…

Tonight, March 10 2021, win and in: That leads us to where we are now: if Evanston beats Maine South tonight, they clinch their spot in the Chipotle Clash of Champions. Last week, in the game where Peters became Evanston’s leading scorer, Maine South played a really solid 2-3 zone against the Kits. Evanston struggled to hit tough shots on the perimeter, and with Adams and Ajiboye out that game as well, they struggled inside.

Tonight, Adams and Ajiboye will be playing. With more of a post presence, the Kits hope to relieve some of the pressure off Peters and the other guards, who have really had to diversify their games without bigs. We know the defensive presence Ajiboye brings to the table, as he’s established himself as an elite shot-blocker, but it’ll be interesting to see how his return will open things up for Kits guards like Bull, Holden and Peters.

The game will be streamed on NFHSNetwork. If you are unable to watch live, or don’t want to purchase a subscription, follow @TheEvanstonian on Twitter for live updates.

If the Kits win tonight, in a game that they’re heavy favorites in albeit a tough matchup, they’ll face Niles Notre Dame on the one year anniversary of the Loyola games postponement. The Dons are a team that’s starred by a three-headed monster of Troy Damico, Louis Lesmond and Anthony Sayles. However, the newly-founded rivalry doesn’t just stem from the extreme talent Notre Dame has; it’s a result of having some of Evanston’s best talent wearing Notre Dame uniforms. Lesmond, a Harvard commit, was a Wildkit his sophomore year after moving to the U.S. from France, but transferred to Notre Dame that summer. Sayles, Notre Dame’s four-year starting point guard, is also an Evanstonian.

The pressure will certainly be on for the Kits. After not expecting a postseason, to getting an invite, to deflecting it, to almost losing out on the bid, it’s been a long ride for Evanston to get here. Regardless, Peters thinks the Dons are the ones with more pressure.

“It’s probably a little more motivation for them just because they haven’t beaten us in a while,” Peters said. “For us, we’re just worried about our legacy; it’s a legacy game for our senior class. We’re not too concerned about where these kids came from, and why they chose to go to Notre Dame instead of Evanston.”