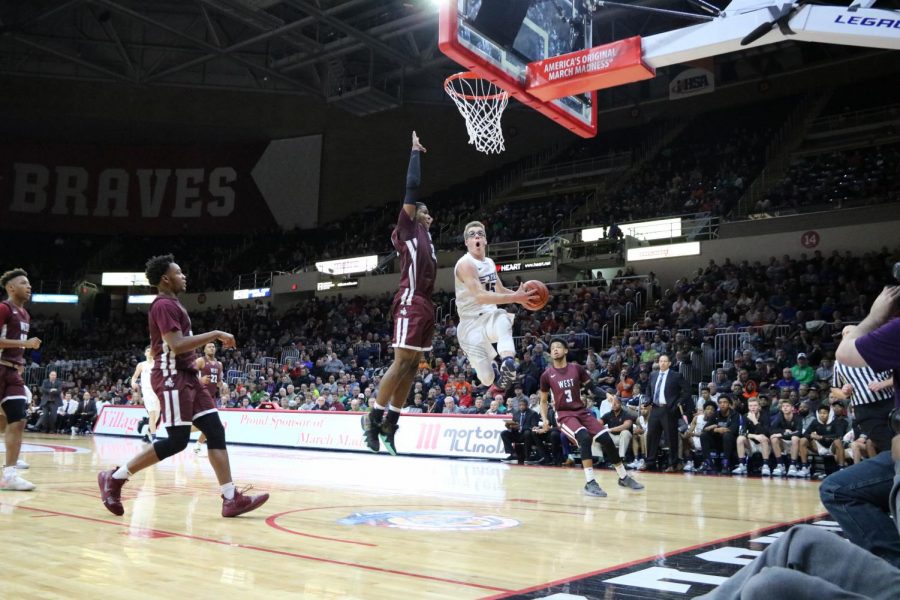 Throughout the past month-and-a-half, Chicago Sun-Times high school sports contributor Joe Henricksen has been counting down the 50 most winningest Chicagoland boys basketball teams of the decade (the 2010-11 season through the abbreviated 2019-20 season). Earlier today, the count hit no. 9, and Evanston heard its name called. Aside from wishing the Wildkits were even higher on his list, here are my thoughts about Evanston’s biggest storyline, All-Decade team, underrated highlights and more, side-by-side with Henricksen’s.

I debated myself constantly on where to go with the decade’s biggest storyline. In the end, I chose to go with the more broad take, and that would be the sheer evolution of Evanston basketball throughout the decade.

Evanston Township High School, historically speaking, has had a very solid boys basketball program. The 2010s, which began with the hiring of Peoria Richwoods coach Mike Ellis, has seen Evanston elevate from its ‘very solid’ status to a suburban powerhouse.

With two trips downstate and three straight super-sectional appearances from the 2016-17 and 2018-19 seasons (with 2019-20’s post-season cut short prior to an Evanston-Loyola sectional matchup), Evanston ended the decade in dominant fashion.

While the trips downstate were certainly the highest point of the decade, as the biggest storyline, they don’t fully encompass the sustained success of Evanston in the two years prior, and in last year’s season.

No changes or surprises here, as this call was a layup. In many fans’ eyes, Eastern, who played three seasons at Purdue before declaring for the NBA draft, rivals Everette Stephens (1984), another former Purdue guard, for the best player in Wildkit history.

In true Mike Ellis fashion, my four-guard All-Decade team will be playing small-ball. Henricksen and I have a pretty similar lineup, with four out of the five players being the same, but I did make one change.

This was the easiest decision on the list. Eastern, the Player of the Decade, ended his Wildkit career as a member of the 1,000 point club, one of only four members to do so in the 2010s. However, the 6’6” point guard was much more than a scorer for the Kits. At Purdue, Eastern was a defensive specialist.  When 2019 Big Ten Player of the Year Cassius Winston, a former star at Michigan State and current guard for the Washington Wizards, was asked who the hardest player to score on was in the conference, his answer was Eastern. On top of his defensive and scoring prowess for the Kits, you could count on Eastern to grab five rebounds and dish out five assists as well, making him remarkably dynamic.

Including Holden was the one change I made from Henricksen’s All-Decade starting five. Holden, who also surpassed 1,000 career points, was the Kits’ starting point-guard in both of their runs downstate and also played a big role in the 2016-17 season as a sophomore. Holden was an electrifying player to watch, using his elite quickness and change of direction to slash through holes and get to the basket. When Holden graduated from Evanston, he left Beardsley Gym with the most wins in program history (tied with teammates Ryan Bost and Lance Jones). Without Holden, the Kits would not have made it down-state and Evanston would not be in the top ten of Henricksen’s list. In my eyes, as the starting point guard for two runs downstate, as well as being the winningest player in history, Holden has to be included on this list.

Jones, like Holden, is tied for the winningest player in Evanston history and also scored 1,000 points in the orange and blue. Jones, who has now transitioned into a point guard for the Southern Illinois Salukis down in Carbondale, Ill. was more of a wing during his time with the Kits. The tough guard was the best player for the Wildkits during their two runs downstate, as he was phenomenal both offensively and defensively, a common theme amongst coach Mike Ellis’ stars. Jones, standing at 6’1”, would often play above the rim with his elite athleticism and thrived in transition, turning steals into fastbreak buckets.

Princeton commit Blake Peters, a current senior at ETHS, didn’t need a senior year to make the All-Decade team for ETHS (his senior season wouldn’t have fallen within the decade even if there is a season this year). Peters was a full-time starter in his three years for the Kits and established himself as one of the best three-point shooters in state history, shooting an astounding 45 percent from beyond the arc in his sophomore campaign. Even more impressively, Peters was never afraid of the big moment, with some of his best games coming down-state in Peoria. In March of 2019, where ETHS finished second, Peters scored 27 points in the semi-finals, nailing seven of his eight three-point attempts. In his freshman season, against powerhouse Whitney Young, Peters sank five of his seven three-point attempts, scoring 23 in a narrow defeat to the Dolphins.

Williams, a current senior forward for Fairleigh Dickinson, averaged 13 points and nine rebounds for Evanston in his senior season, but those numbers understate Williams’ importance to the team. In a season where Evanston played its toughest schedule in program history, playing elite teams from other areas of the country, the Kits needed Williams’ post presence, both to score and to protect the rim. Standing at 6’8”, Williams’ wrath down low has been missed for the last three years, where Evanston has struggled some in the paint.

Making this list was a challenge, because in addition to the five players above, there were many other deserving student-athletes. Below, I name three honorable mentions, who very well could have made this list.

6’10” C James Farr is who I swapped out from Henricksen’s list, in favor of Holden. Although he has more impressive stats than the big man I went with in Williams, there are two main reasons why I left Farr off of my top five. Firstly, he only played one season in the 2010s for ETHS. Granted, it was a dominant season, as he did average a whopping 15 points and 11 rebounds, but it felt wrong to put him above other players who had individual success for multiple years. Secondly, all the players in my list above had made and or led the Kits to a super-sectional appearance. In Farr’s lone year in the 2010s, the Kits didn’t even make it to the regional finals. By not including Farr on my starting lineup, I’m not saying he isn’t one of the five most talented players, as I think he certainly was; however, I don’t think his Wildkit career adds up to that of any of the five aforementioned players. Following his time at ETHS, Farr had a successful career at Xavier before playing professionally overseas and now is a graduate assistant at Louisville,

Hamil, a 6’5” wing, averaged 15 points in his senior year for the Kits while playing alongside Eastern and Williams. His height, combined with his shooting and slashing ability, made Hamil a scoring machine and matchup nightmare offensively. Now, at Rockhurst University, Hamil is one of the Hawks’ top scorers.

Bost, tied with Holden and Jones as the winningest players in Kits history, epitomized the slogan ‘heart doesn’t mean height.’ Standing at 5’9”, Ryan Bost was a tenacious defender, despite being undersized. Offensively, Bost had a silky-smooth shot from beyond the arc and attacked the rim well with a tear-dropping floater. Tragically, Bost, who comes from a long lineage of Evanston basketball stars, passed away in November, a devastation to the Evanston community. Bost is greatly missed.

Blake Peters’ ESPY-nominated 80-foot buzzer-beater to defeat Maine South has been the talk around town for the last four years, and rightfully so. ETHS alum and ESPN anchor Cassidy Hubbarth announced SportsCenter’s top 10 plays the next day, and, sure enough, Peters’ shot was number 1. While this obviously was a once-in-a-lifetime play, I think it is properly rated.

Because of that, my choice would be Lance Jones’ block on New Trier’s Griffin Ryan. For a couple years, during ETHS’ reign of dominance, New Trier gave Evanston some tough competition. Led by their pair of ‘Twin Towers,’ in 6’7” Spencer Boehm, and 6’9” Ciaran Brayboy, New Trier was an extremely tough matchup for the Kits. In January of 2018, the Trevian Wildkit matchup included packed stands, per usual. In a game that couldn’t be more competitive, Ryan, a senior forward for New Trier sprinted upcourt as time ticked down and attempted a layup that would break the games’ tie and give New Trier a win. However, Jones, then a junior, had other plans, as he flew in from behind, making a Lebron James-esque chase-down block to force the game into overtime. In overtime, Evanston beat New Trier 50-49 in a defensive battle, handing New Trier their first conference loss of the season.

In a play that doesn’t get talked about much, you have a player with a four-inch height deficit chase down and block an arch-rival team’s player as time expired, forcing overtime, where they’d end up winning. That’s a heck of a story if you ask me.

Overall, Henricksen and I have a couple different views on the last decade of basketball for ETHS. However, we can both agree that coach Mike Ellis and the Wildkits had a decade to remember.