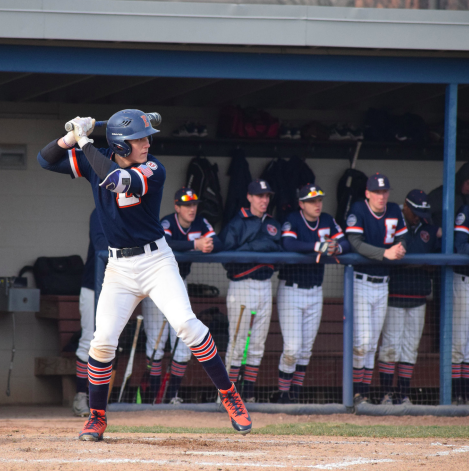 Since games began on July 23, Major League Baseball’s premature reopening led to 146 named cases of COVID-19 within the league. They have been at full liberty to keep the health status of any player out of public knowledge, so there’s no telling how many positive cases have occurred. Opting out of an approach like the NBA’s self-contained bubble, there was little way to mandate if the team members stick to MLB guidelines. Their actions downplayed the effects of this virus and made it seem nonexistent, especially to the high school sports teams that are planning their season.

The Miami Marlins had one of the first and largest outbreaks within the first week of the regular season, showing how irresponsible Major League Baseball’s approach was. Their season had to be postponed for a week after 18 players neglected safety procedures and tested positive for COVID-19. The testing result was no surprise, seeing that many of the players were identified at the hotel bar, and even off the controlled premise entirely.

This shameful behavior also left some members of their opposing team, the Philadelphia Phillies, testing positive, after choosing to play despite the possibility of infection. The MLB refused to shut down operations, causing more players to get sick and continue their contribution to the deadly spread of COVID-19.

This trend continued throughout the season: team outbreak, game postponement, a week of seven-inning double-headers. Rinse, wash, repeat. It furthered the false notion to viewers that, even after players become infected, COVID-19 just isn’t that big of a deal.

While MLB tried to implement rules to prevent the spread of the coronavirus, they were tremendously ineffective in their efforts. No fans until the playoffs, mandating masks in the dugout, required testing, and boundaries to where they could go were a few of their guidelines. Of course, they could’ve done better, considering so many players blatantly ignored the guidelines. Even now, containing some of the postseason to two locations was a much safer move than traveling all over the country. It would’ve been smarter to have done that from the start.

“These are professional athletes. These are people that a lot of fans look up to,” junior and ETHS baseball player Ben Gordon explained. “And I think that during the pandemic, especially since your life venture is the game, I think you should do your best to try and protect it and try to protect the safety of it.”

As Gordon said, many people admire athletes. Consequently, when they see MLB players partaking in unsafe, and irresponsible activity, it can make fans take the virus much less seriously.

The MLB does give hope to players that ETHS will also have a baseball season, particularly because their league is a lot smaller than the MLBs and, therefore, an easier league within which the virus could be contained. With the fall in the rear view mirror, the team was—with adequate health precautions—able to finish its fall training period of practices and scrimmaging. The Kits plan on playing a 30-35 game season, but of course, nothing is for certain.

“I think the fact they made it 60 games, and then a full playoff of baseball, gives me hope that the way our season will be run will work,” Gordon said. “It seems like it’s going to work out pretty well if we can all wear masks, but I think the difference between high school baseball and MLB are pretty big in terms of club sizes and the amount of management, but I do think the MLB has had some issues.”

That’s the problem, isn’t it? The ETHS team did a great job ensuring the safety of every student during its fall training, whereas the MLB did not take the same level of precaution. The Kits monitored social distancing, wearing masks, health checks, and the players stayed safe. The MLB promised a lot of the same procedures, and, yet, so many team members got sick. ETHS made the safety of students the top priority when the MLB made money theirs.

“I think the way our program handled [COVID-19] has been really good,” Gordon commented. “It’s been a really good experience, and I think we can recreate that in the spring.”

This makes many think that the season will be safe; however, this was the same line of thinking prior to Major League Baseball’s restart in July. Because of this, it is extremely important that players, coaches, and members of the Athletic Dept. don’t become complacent, as many professional and collegiate leagues have done.

Professional baseball is not a necessity during a pandemic, but only a means of entertainment. How is it they managed for sports to start up, but schools across the country remain closed? MLB put money before safety, and was unsympathetic for the 240,000+ American deaths, which may lead other league’s to do the same.

Not just the players themselves are affected by this poorly made decision. So many people look up to these players, including students at ETHS. It puts doubt in their minds that this disease is as serious as it seems. When in reality, it appears as if the virus is at least four times more deadly than the seasonal flu, not even taking into consideration the severe health issues people can develop once infected. Globally, there have been over one million deaths due to COVID-19. Organizations, such as the CDC and WHO, have said the best way to protect oneself is through masks and social distancing, none of which the MLB has fully required. People are dying, now is not the appropriate time for baseball.

The St. Louis Cardinals had ten players test positive, but after rumors of a casino visit got shut down, the outbreak has no verified origin. MLB authorities have denied the presence of evidence to show that players did anything to break safety protocol. There is always the possibility these team members got it from their hotel stay, flight, or simply not being completely quarantined. Travel will always be a risk, and in this case, it shouldn’t have been one that got taken. Instances like this continue to make people believe that it’s okay to be unsafely traveling during a pandemic. Since there were no long term effects of the players’ infections, there’s a faulty standard that it won’t matter if somebody gets COVID-19 at all.

According to SportsCasting, the MLB has a projected loss of 129 million dollars worth of net operating profit with their season cut in half. The players were paid only for the games they participated in, and have already taken pay cuts. With their operating costs being basically half that of a normal season, they’re not really losing too much money. Teams are absurd to expect that, amid a global pandemic, they will be able to operate and gain revenue as they once did. While the finance loss of having no season would be detrimental, MLB would still be able to recover. On the other hand, death is permanent, and the example they set for viewers was unacceptable.

There were over 45 games postponed this season. It would’ve been in their best interest to halt operations, and hopefully, their mistakes will serve as a reminder to other sports leagues.

Students at ETHS look up to the players that are choosing to play during a pandemic. They’re setting the precedent that it’s okay to travel across the country and play sports. It’s okay to see your friends and not socially distance yourself. If a high school student’s biggest role model isn’t staying safe, then it’s likely the student will follow in their footsteps. And if the MLB can play baseball, why can’t the ETHS team also have a season? Why did their summer season have to be canceled at all? The MLB values money before the lives and wellbeing of children, and it cannot go without criticism.