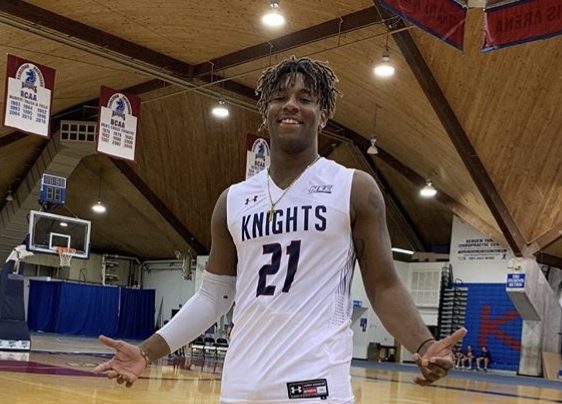 Elyjah Williams, Class of 2017, was a vital member of ETHS’ 2016-17 team that was sectional champions, and ranked as the top team in Illinois throughout much of the season. Williams, a 6’7” forward, is now a senior at Fairleigh Dickinson University.

In each year of his collegiate career, Williams took on a greater role for the Knights, as his minutes, points, rebounds, assists, steals and blocks per game increased in both of the last two seasons.

“I think I’ve gotten better every year that I’ve played,” Williams explained. “My freshman year I was kinda just playing, seeing how college is and adjusting to things. In my sophomore and junior year I took more of a leadership role on the team, getting more playing time, and having a say in what’s going on with the team.”

After starting in all of his 30 games last season, putting up 11.8 points, 7.3 rebounds and over a block per game, Williams hopes to keep expanding on his role.

“I hope this year I can be one of our better players again, maybe the best player on my team, more of a leadership role even more than I have been,” Williams said.

While Williams and NCAA athletes across the nation all hope their season will play out, regardless of what happens this season, Williams has already cemented himself into Fairleigh Dickinson’s record book.

After winning the Northeast Conference in the 2018-19 season, Williams and FDU earned its first March Madness appearance in the 70 year program history. Winning the play-in game against Prairie View 82-76, the 16 seed Knights advanced to play the top-seeded Gonzaga Bulldogs.

In that game, Williams faced off against an array of future NBA players, including 2020 NBA All-Rookie team members Brandon Clarke and Rui Hachimura. Unfortunately, the Knights were lost in a 49-87 blowout, but regardless, Williams was a key member of the most successful team in FDU history.

With this year’s season being at risk, all fans can do is hope there will be some safe way for college basketball to return. For Williams, that would give him the opportunity to continue his progression as a player, and potentially lead the Knights back to March Madness.