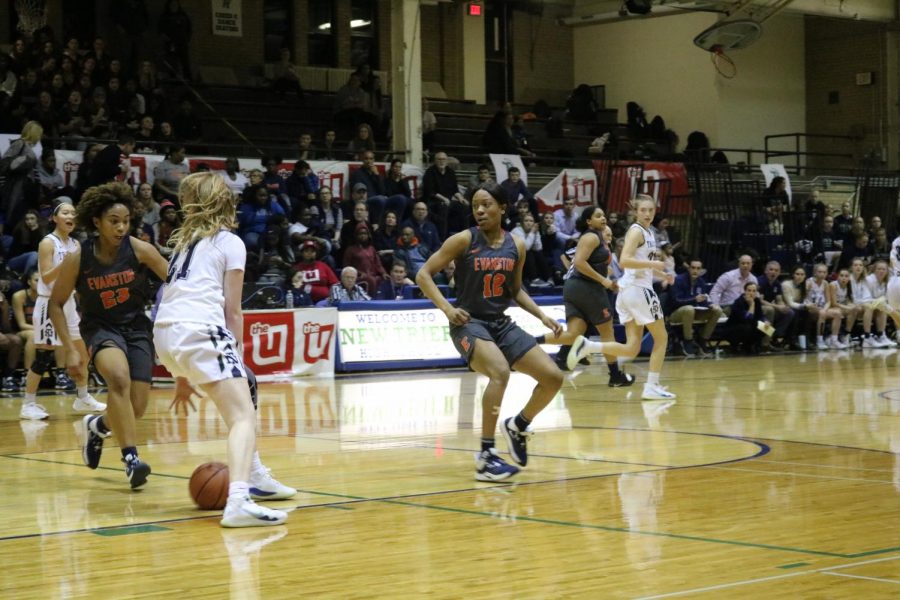 Many say it’s just a game— but sports have a strange way of bringing people together. Sports can get communities united, people overjoyed and a whole country on the edges of their seats. The absence of sports during the COVID-19 pandemic has affected billions of fans across the globe. But for many athletes, it will be added to a long list of obstacles they have faced throughout their lives.

Athletes all over the planet have dedicated their lives to a beloved game. Their commitment is evident through the blood, sweat and tears left behind throughout the years. But for many, getting to play the game they love isn’t something to be taken for granted. The journey for these three class of 2020 ETHS student-athletes in particular has been filled with many hurdles; but all three were able to overcome the obstacles.

Dominique Bahombwa came a long way before reaching the varsity stage at Lazier Field— both in terms of his skillset and miles travelled. Bahombwa moved to Evanston from Tanzania eight years ago. Now, as a senior, Bahombwa was one of four refugees on the Kits’ roster. While the move was challenging, and there was much to adapt to, there was one constant amongst Bahombwa’s homes: the love for soccer.

“One thing [Evanston and Tanzania] have in common is the love for soccer,” Bahombwa said.  “Love for soccer at Evanston is very huge.”

Aside from that though, there was much for Bahombwa to become accustomed to. From economic differences, to a new language, the differences between the two places 8,000 miles away was immeasurable.

“It was a big transition coming to America because everything was different here,” Bahombwa explained. “ Not knowing the language made it harder, but playing soccer helped me get friends quick even though I didn’t know what they were saying.”

But even in regards to soccer, the disparities were evident, in large part due to the economic differences between the two countries. The World Bank estimated the United States’ gross national income per capita was $63,080 and Tanzania’s to be $1,020.

Consequently, Bahombwa’s experience with soccer in Tanzania and Evanston were very different. Bahombwa recalls playing soccer on dry fields while barefoot in Tanzania. In Evanston, the Kits have a well-kept Lazier Field, maintained in pristine conditions. In Tanzania, Bahombwa recollects how the fields often didn’t have a goal, and they had no ball to play with, so children would make the materials themselves

In addition to the monetary and organizational improvements in Evanston, Bahombwa is grateful for  the support from the Evanston community.

“At Evanston you have people who care for you, but back in Tanzania, no one really cares about anyone,” Bahombwa said. “Evanston athletics are great because there is a sense of community. All of my teams have felt like families and I have grown a lot by playing sports for ETHS.”

Ariel Logan was a vital part of ETHS’ girls basketball success. Logan, a senior forward, was an anchor for the Kits’ defense, using her tenacity to be one of Evanston’s leaders in steals. Her play was impressive, but her comeback was astonishing.

Just months prior to the season’s start, Evanston was playing one of its many summer games, a good way for the team to get quality practice in, and develop chemistry on the court. Initially, nothing was out of the ordinary— but at the end of the game, Logan suffered from a seizure while on the bench.

For the rest of the summer, Logan’s life was incomparable to what it was prior to the episode. Logan spent a significant amount of time in the hospital for the following months. For over two weeks, she was unable to walk or talk. However, there still hasn’t been a diagnosis to this date.

As summer came to a close, and fall was rolling around, Logan was still in and out of the hospital, and had yet to return to being a full time student at ETHS. Nevertheless, Logan was cleared to play as tryouts rolled around. For the following weeks, Logan was cleared, uncleared, and cleared again. Despite the journey to the court being long, overwhelming and grueling, Logan was able to return to the game she’s loved for many years, and she made her presence felt.

“What helped motivate me back on the court were my coaches and teammates. They didn’t rush me to get back on the court;all they wanted was for me to improve in small increments and to take my time. Also, I knew this would be my last year playing basketball, so I wanted to have a good experience with my team,” Logan said. “This year the whole team had a bond together. We’ve been with each other all four years.”

Logan cited her teammates, who she shares a close bond with, as a major motivator to get back on the court.  The team was a senior-dominant group, many of them playing with each other for almost a decade.

“My challenges mentally and physically were that I felt like I wasn’t getting better or improving as quickly as I wished to,” Logan explained. “It made me frustrated with my progress. For a while, I wasn’t able to walk or talk so it made my rehab process go by slower.”

Despite the feeling of being stuck, Logan erupted. Within months, Logan became a force to be reckoned with for the Kits.

Logan says the season didn’t go as planned for Evanston, as they didn’t get the State Championship they were looking for, but there were certainly many bright moments throughout the season.

Following the basketball season, Logan also was persistent to return to the girls track team, where she competed in the 4×100 and 4×200 relays during her junior year. However, the season was cancelled due to the coronavirus pandemic.

Logan was a fighter throughout her career as a Kitand was determined to compete.

“I hope this impacts other people to never give up. Although it may seem like an impossible recovery, you will get back healthy and do the things you plan to do,” Logan said. “In this moment, it is also important to lean on people that care for you the most. It is hard to get through a rough obstacle without a support system.”

Max Peterson is one of the most successful runners in ETHS history. After finishing 35th in Peoria at IHSA’s state competition his junior year, all the odds were in his favor to make another state appearance. However, some things are simply uncontrollable.

On Nov. 2 2019, Peterson was gearing up to run in the Sectional race, and hoping to qualify for state yet again. However, Peterson never crossed the finish line as he passed out in the middle of the run.

“Physical and medical setbacks are nothing new [for me]. I’ve experienced them every year, stress fractures, shin splints, tendinitis, etc.,” Peterson explained. “ It’s just what happens when you’re pushing yourself that hard every day in practice. The incident this fall was particularly difficult because I passed out during the sectional cross country race from what was most likely dehydration, and it stopped me from having a chance to qualify for state this year.”

While this was a devastating blow for Peterson, he did as much as he could to return to school and prepare for the track season.

Last year during the track season, Peterson won the conference championship in the indoor 1600 meter race. In the outdoor competition, he placed second in 1600 and 800 meters. Additionally, he ran in the 4×800 meter relay.

Unfortunately, the COVID-19 pandemic forced the IHSA to cancel all spring sports, meaning Peterson wouldn’t be able to compete in track his senior year.

“I went into the indoor season excited to show my improvement and make up for a lackluster cross country season. I was devastated when it was cut short because it felt like my senior season is what I’ve been looking forward to for the last four years,” Peterson said.

Because the season was cut short, it meant Peterson wouldn’t have the opportunity to go downstate for cross country or track this season. That was difficult for him given his expectations, but he also is sad for the senior class as a whole.

“State always felt so surreal.  It also was sort of the seniors’ big send off so I’m upset I won’t get to experience that this year. However,  I’m most upset that we won’t get to see what the team of 2020 could’ve brought to the table this year at state,” Peterson explained. “We had so much potential going into outdoor season, it’s sad we’ll never see that play out.”

Peterson’s career at Evanston was extremely successful, despite the fact that his senior year didn’t go as planned. Fortunately, Peterson is still able to see the positive side of his career.

“There’s so much to take away from this wonderful program. Most importantly, I think I learned what it means to be on a team and what a good leader looks like. I’m thankful for the coaches who worked with us day in and day out, you could tell they truly cared about making us better athletes. I’m thankful for all the team captains in the past who helped show me the ropes and I’m thankful for everyone on the team who made me feel like I was a part of something bigger than myself.”