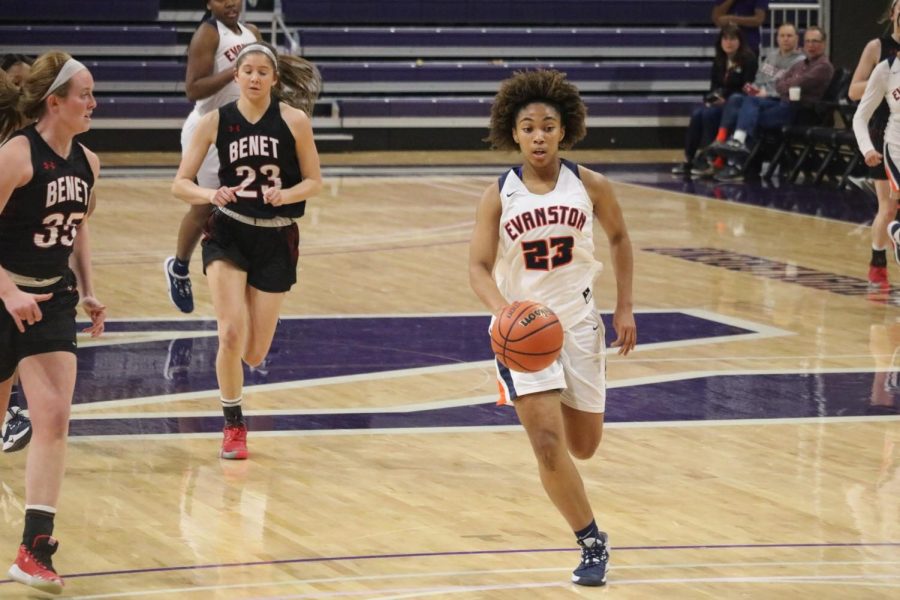 In a time where much of the world is down and many demoralizing aspects of society are headlined in the media, both in and out of the sports world, I think it’s important to celebrate some of the achievements Evanston’s sports teams accomplished this year. One of the things at the top of that list would be ETHS’ girls basketball team.

Although their season ended earlier than they hoped, the girls basketball has a lot  to be proud of when looking at their season. The Kits were led by a group of seven seniors who have left a timeless effect on Evanston basketball that is unprecedented.

“A lot of people really know them as basketball players, but because I had so much time with them, I think what stands out for me more is just how they are as people,” coach Brittany Johnson said. “They’re really incredible, smart kids, they take academics seriously. I’ll always remember how they helped me build this great culture here at Evanston.”

Johnson stepped in as Evanston’s head coach four years ago, entering Evanston’s halls at the same time as this group of seniors.

“It’s crazy to think that we came into Evanston together. I came in four years ago, and I identified them as a class that I felt like could be really special, and they have been,” Johnson explained.

Johnson hit the nail on the head when she invested so much into this class, as they did nothing but produce wins for Evanston. In the last four years, Evanston girls basketball won over 90 games and the CSL South title all four years, and made it to the Sectional Finals three times in large part due to the 2020 class.

Additionally, many players won individual accolades as Ambrea Gentle, Kayla Henning and Jayla Turchin were named to the CSL South All-Conference team, with Henning winning CSL South player of the year. Despite the season being over for these seniors, for some, their basketball careers are just beginning.

“If we have kids that want to play at the next level, then it’s my job to make sure they’re prepared for that,” Johnson said.

Gentle (Southeast Missouri State), Tyler Mayne (St. Louis) and Turchin (Lewis) are all committed to play basketball in college. Henning will also be continuing her basketball career, as she already has Division 1 offers but is undecided. Johnson also believes forward Ariel Logan has a strong possibility of being a multi-sport athlete in college byplaying basketball and running track.

The team had a season to remember, finishing 24-7, and making it to the ‘sweet 16’ before a 43-42 overtime loss to Maine West. Despite not coming out on top, the Kits played a fantastic game against the Warriors. West is led by five-star recruit and Oregon commit Angela Dugalic, who Evanston held to 14 points on 2/17 shooting from the field.

On their road to the Sectional Finals, Evanston’s schedule was filled with many challenges throughout the way.

Early in the season, Evanston faced off against Simeon, winning 63-58 in Beardsley Gym. While the game was later forfeited due to eligibility issues, this was a huge team win for ETHS to give them early momentum against the Wolverines, who ended up winning the State Championship for the 3A division.

A month later in Lombard, the Kits battled against other top teams at the annual Montini Classic Christmas Tournament, taking home the tournament’s trophy by beating Montini Catholic and Bolingbrook. Both of those teams made it downstate, with Montini finishing 3rd in 3A and Bolingbrook finishing in 3rd in 4A.

The Kits’ resume isn’t just limited to Illinois though, as they defeated Beaver Dam (WI) in 2OT. The Golden Beavers were scheduled to play in WIAA’s Division 2 State Championship, but the game was cancelled due to the COVID-19 outbreak.

Additionally, Evanston took a trip to Louisiana, where they beat Lee and Doyle, the third and seventh ranked squads in Louisiana, according to Maxpreps.

Throughout their journey filled with blood, sweat, tears and smiles, the Kits poured their heart out onto the court. While it will be a difficult transition for the Kits due to the graduation of such a strong class, their legacy will be continued through the underclassmen.