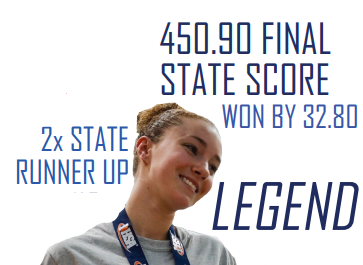 Lucy Hogan will leave Evanston with one of the greatest legacies in ETHS diving history. The soon-to-be-graduate has placed within the top two in state all three of her years as an ETHS diver, including a state title this season. Just like any other great athlete though, success did not come overnight. Hogan’s legendary career came from over a decade of honing her skills. The year was 2008. Then eight-year-old Hogan had been casually taking part in free swim at Northwestern’s Norris Aquatics Center, when a man approached her.

This man, later to be known to Hogan as coach Kevin Auger, watched in awe as Hogan was able to show signs of potential with no prior training. Intrigued, Auger suggested to Hogan that she try her hand at diving and come out for the ETHS team when the time came. Hogan took him up on that offer, and the rest is history.

Coming into her freshman year, Hogan did not know what to expect as she was new to high school diving. Despite her lack of certainty, Hogan ended up as runner-up at State in her first season on the Evanston team, making her presence known. Hogan also finished runner-up at State during her sophomore year, but chose not to compete for the ETHS team during her junior year. This did not come from a lack of interest, but rather a strategic decision for Hogan and her future.

“Most college coaches don’t even pay attention to how you do in high school,” Hogan said. “I didn’t do season because junior year is the main year for recruitment, I needed to train at my club and focus on doing well in the club meets.” After a year of intense training, Hogan came back or her senior year and continued her run of success like she never left. “I was tired of getting runner up and really wanted to win state for my team and for the Evanston community,” Hogan said.

As Hogan entered her final season, her relentless commitment appeared to pay off. She dominated regular-season play, leading to an undefeated record and the No. 1 seed heading into state competition. There, Hogan continued her run of mastery. She finished with a final score of 450.90, edging out Vernon Hills’ Allison Landis by a total of 32.80. Hogan finally got over the hump of second place finishes and accomplish what she had set out to do since her first days in the ETHS pool.

“[Winning state] meant so much because this was my last shot to win, so I wouldn’t get another year to try. That made it more special,” Hogan said. “I was super happy to have accomplished a goal that I had been working towards since I was a freshman.” Hogan’s presence in the pool was not only felt in competition, but in practice as well. Hogan was able to act as a mentor towards younger divers and take a leadership role within the team. “She’s definitely a leader of those divers,” Auger said. “She has a lot more experience, not just in high school, but elsewhere, that she can talk to the other girls about.”

Hogan leaves ETHS having seven school records to her name, three appearances on the IHSA All-State team, and a state championship, but none of those accomplishments amount to what she learned about herself and how to act as a teammate. Now heading to the University of Michigan to continue her diving career, Hogan will walk out of ETHS a changed person. Her time at ETHS was unforgettable, and will help her as she looks to succeed at the collegiate level.