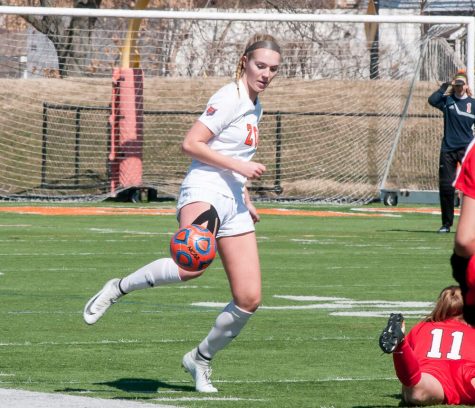 Destefano goes to kick the ball.

Annika Destefano will continue her soccer career at Cornell University in Ithaca, New York next fall.

“I visited Cornell many times and every time I went I found something new that I loved,” Destefano explained. “It had the best of both worlds for me. I was interested in a lot of the majors it had to offer and I also felt very at home with the team and coaches there.”

In addition to connecting with the team and coaching staff easily, she also felt that the academic rigor fit her and her family’s values.

“My father went to Cornell and my mother went to Dartmouth,” she said. “So there was a natural affinity towards that environment.”

Though committing to a prestigious school and soccer program would cause many to lose focus on the high school season, Destefano will focus on the little things in her senior year.

“Whether that means achieving a goal our team has made, giving our all in a game or finishing those last suicides during practice,” Destefano said. “By the end of season, there will be an overall feeling of pride because we know we gave our best effort.”