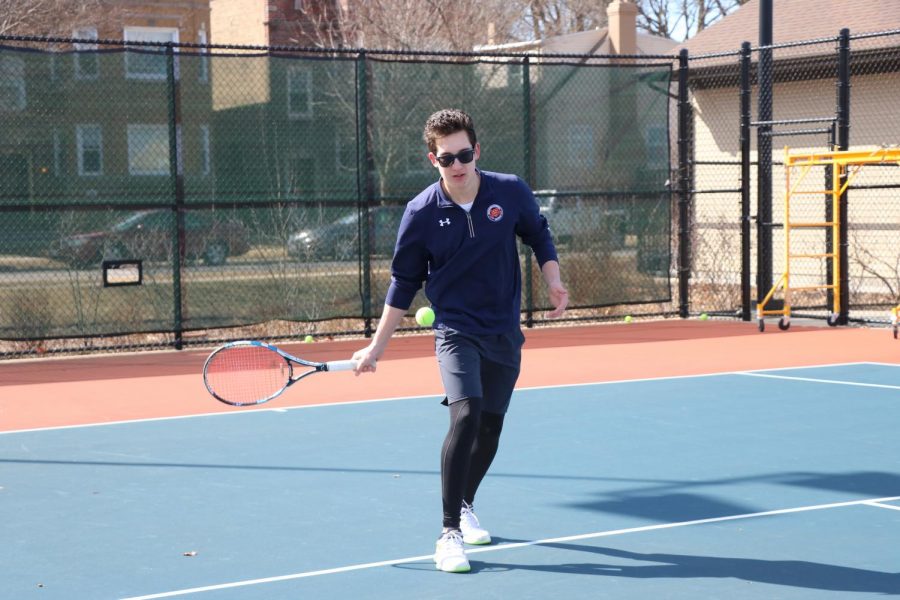 After a 2-5 record against CSL opponents last year and a third place finish at the CSL South tournament, the team has trained hard in the offseason and coach Marcus Plonus is excited about what could be in store this season.

“Everybody’s worked hard in the offseason,” Plonus said. “That’s the goal. We’ve pounded it into everybody’s head that we can’t make you a superstar in the eight weeks during the season, you have to work hard in the offseason. I think that message is getting heard and hopefully Evanston tennis becomes competitive with the top teams in the area.”

Senior co-captain Max Johnson has made it a point of emphasis to not only work on his game outside of the high school season, but to get his teammates to buy into this idea.

“Myself along with Max Shepherd (Johnson’s doubles partner) and a few of the sophomores have been training at Northwestern and North Shore Racquet Club,” Johnson said. “It’s a good time to get to play with the other people on the team but also other players from other teams who train there. You get a well-rounded playing experience to learn how to play with others.”

The underclassmen on the team, highlighted by sophomore standouts Gunnar Anderson and Ben Ward, are particularly strong this year and will aim to have a strong contribution this season and for years to come. Finding the right mix of experience and new talent will be key to the Kits’ success this year.

“We have a couple of freshmen and a lot of returning sophomores so we have a very good core of varsity players,” Johnson said. “I think we can do very well this season pairing up the experience of the older juniors and seniors with the young, skillful freshman and sophomores.”

Johnson, who was also a co-captain last year, knows that it will be his job to help lead the team this season.

“Being a senior this year, I feel more comfortable in my role of directing and leading the younger players,” Johnson explained. “Last year, it was kind of awkward trying to find my place with seniors above me, but I’ve found it this year.”

Johnson and his teammates will kick off the season next Saturday at Oak Park-River Forest at 8 a.m.