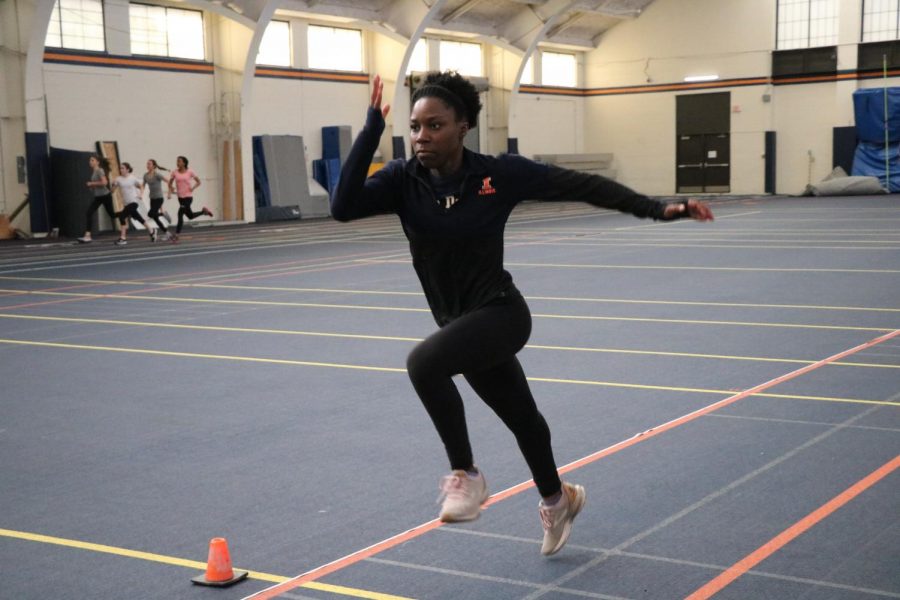 While the record-breaking career of current University of North Carolina track star runner Enyaeva Michelin had a historic effect on the girls’ track team, this year’s Kits have confidence that this season is going to be a promising one.

“Last season gave us a good taste of what we can do and now we’re all intending to get to state and become better,” junior Hannah Lipman said.

Although the season just started, the team believes that high performance is a likely possibility. So far, the runners have placed second at meets on Feb. 23 and March 2 at the Olivet Nazarene Perry Rec-Center and Proviso West, respectively.

“We definitely want to be able to stay healthy and keep working all throughout the year and when it comes to May, see how many medals we can get at state,” senior Abby Osterlund added.

This doesn’t mean that the start to the season has been all positive. The team has faced a few injuries, one being from their senior runner Sasha Gordon, who has since recovered.

“I just have the goal of getting back to where I was last year and where I need to be now this part of the season,” Gordon said.

Even with the hard work they’ve put forward and the obstacles they’ve overcome, they still feel misrepresented among other teams in the school.

“Not to throw shade at any other sport, [but] we have a very strong history especially going to state… yet we don’t even get announcements for that… It’s kind of like you don’t even expect it anymore because it’s just never happened,” Gordon explained about the lack of recognition they receive.

Even their record-breaking teammate couldn’t escape this pattern. According to the spring 2018 edition of The Kit, Enyaeva was one of the two female runners to score a top ten finish in the IL State High School Meet, which has been active since 1979. Her electric speed brought the school average down from 4:59.10 to 4:54.30.

“She’s the best athlete we’ve ever had in all of ETHS and no one even knows,” Osterlund adds.

When commenting on his perception of how athletes on the team are recognized for their achievements, Coach Gunter referenced his time as a track competitor in the early 70s.

“We were brought up in a different culture. We were taught that your actions speak for themselves. Everybody reported on the action and it kept the kids humble.”

Although the meets have just started, Coach Gunter has high expectations for the season. “[They’re] the same as they’ve been for the last 40 years. Qualifying for the state meets, and while we’re at the state meet, keeping that 44 year score streak intact, that’s it.”

The next meet for the girls track team will be tomorrow, March 23, at the Whitney Young invite. Their hope is to continue their success and their path to state.