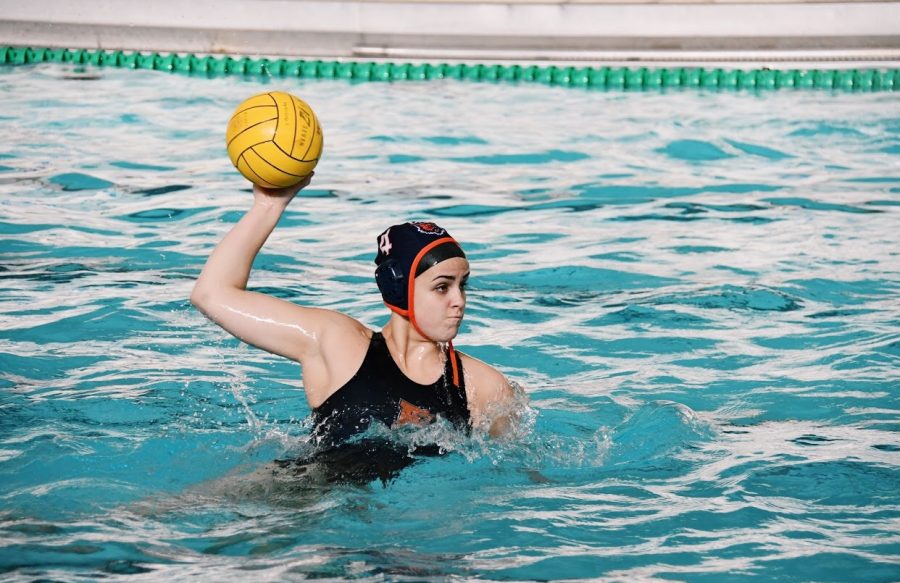 The ETHS girls water polo team aims to use their unique speed and youth to their advantage as they head into their highly anticipated season.

This year’s team features two freshmen on the varsity level, a complete abnormality to a typically junior and senior dominated team. In head coach Andy Miner’s eight years of coaching the team, not once have two freshmen been able to crack the varsity level at the beginning of the season. Nevertheless, Hilda Arellano and Ava Santos-Volpe have both completed this feat, marking a new age for ETHS water polo.

“When you look at the really good teams, the teams that are perennially really good in the state, your Stevensons, your Fenwicks, your Naperville Centrals, those teams always seem to have freshmen and sophomores playing on their varsity team in significant numbers,” Miner said. “I think it’s a mark of an area, a community and a school that really puts an emphasis on water polo when you’re getting freshmen playing.”

With only 11 players currently on the varsity level, the team has surrounded itself solely with quality athletes who can make an immediate impact.

“If you made the varsity team, it wasn’t out of courtesy, you had to have to been playing and contributing,” Miner explained.
Despite the fact that Arellano and Santos-Volpe have played for years before coming to ETHS, they still are willing to take advice from anyone and everyone on the team. Having players who are able to take and learn from criticism to improve, leads to a desire for success, and in result, team success.

“[The underclassmen] are super willing to learn and listen and really want to hear everything you have to say, regardless of whether or not you’re a coach. I think that everybody really appreciates that,” senior captain Halley Seed said.

The underclassmen have been heavily relied upon so far this season, as Seed, one of the team’s star players, has been injured since the beginning of the season with a broken finger. Despite the loss of one of the key contributors, fellow captain Sydney Hollingsworth has continued to lead this team through thick and thin as Seed is forced to watch from the sidelines.

“I’m essentially the only captain in the water,” Hollingsworth said. “It’s been a very difficult adjustment having [Seed] gone, but the team has been adapting well. I’m really excited to have her back because we work really well together and have been playing together for so long.”

Seed has chosen to look at this experience of being injured as a way to view the game in a different way. Watching each game and practice from the sidelines has given her the ability to point out areas of improvement in the team’s game and to be able to become a more “passive” leader.

Seed has acted as a secondary coach who players trust and feel comfortable around to go to for advice and tips on how to improve. So while the experience of being injured may prove to be a positive for the team in the long-run, Seed still remains anxious to get back in the pool.

“It’s really different when you’re in the game and you are a player, when tensions are super high and adrenaline is going. I think being able to watch from the bench and gauge where everybody’s at through that external view has really helped me see what everyone needs to work on,” Seed explained. “It’s a good perspective that I’ve gained from watching it from the outside, but I’m also really excited to get back in the water.”

The Kits will continue their push to make it back to state Saturday, March 29, at the St. Patrick Varsity Tournament at St. Patrick High School.