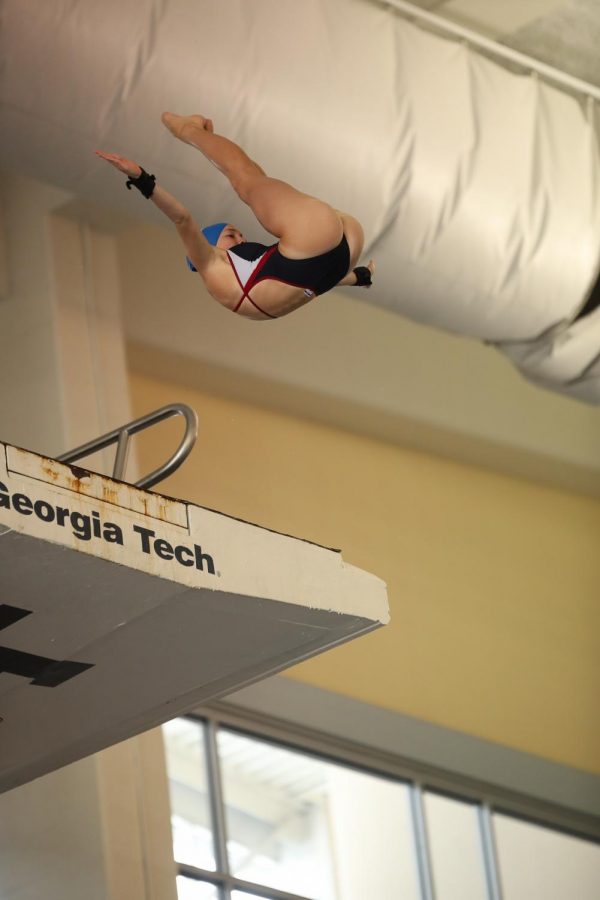 Flooded with Division I offers, senior and star diver Lucy Hogan committed to the University of Michigan at the beginning of fall.

Deciding between Harvard, Ohio State, Michigan and Texas, she chose Michigan because it offered everything she desired.

“Michigan is a great school with a great athletic program,” Hogan said. “It’s also big and close to home which was important to me.”

Hogan, a natural diver, has earned success from an early age. Her coach, Kevin Auger, knew she would be a star from the first time he watched her on the board.

“She’s been great since day one. It was around her third meet when she broke our team record,” Auger explained.

Hogan started diving when she was eight-years-old. While swimming at Northwestern’s Norris Aquatics Center, Auger approached her about joining his team. Soon after, she fell in love with diving and everything fell into place.

In a 2015 issue of The Evanstonian, she declared her goals as a freshman, setting the bar extremely high for herself.

“I definitely want to dive in college at a big school like the University of Michigan,” Hogan said. “I also want to win state in high school.”

This dream became a reality when she committed this past September, aspiring to close out her high school career by taking the state title. In the 2015-16 and 2016-17 seasons, she had placed 2nd in the state championship.

This year, though she is hoping to win state, she is being careful not to push herself past her boundaries.

“I am just going to work hard at practice and try and do my best at the state meet,” Hogan explained.

In addition to her dominance at state, Hogan has received national attention, attending the Junior World Trials in April. After hitting the board once during a dive, she dropped from 5th place to 20th place. Despite this, she persisted to eventually place 10th overall.

“I was really proud of myself,” Hogan said. “I not only placed top 10, but was able to come back mentally after my setback.”

Not letting outside noise affect her performance has proven to be a focal point of Hogan’s success. Many times when it comes to athletes performing at as high of a level as Hogan has, they can become overwhelmed with the recruitment process and trying to impress schools.

Naturally, the pressure of recruitment was felt, but Hogan instead tried to look at the fun side of the process of choosing a school.

“I felt a lot of pressure to perform extremely well at meets, and it was also nerve-racking to think that coaches might not want you or have space for you on their team,” Hogan explained. “Once I got closer to the end of the process and started going on my visits, I had a lot of fun. It was super cool to live the life of those students for a weekend.”

Now that she is committed, the pressure of recruitment has been lifted. While she does not need to worry about impressing programs, coach Auger knows that her motivation for the state series will not diminish.

“She’s a star,” Auger said. “And just like any star in any event, it’s nice to know that we’re going to start pretty much with a guaranteed win.”

Hogan is a household name for Evanston diving, and that will not end when she graduates. Her fingerprints are all over the program, leaving numerous other divers motivated to accomplish just as much.

“When you have a diver, and any other athlete who’s at that high of a level,” Auger says. “It inspires other people to try and be at that level.”