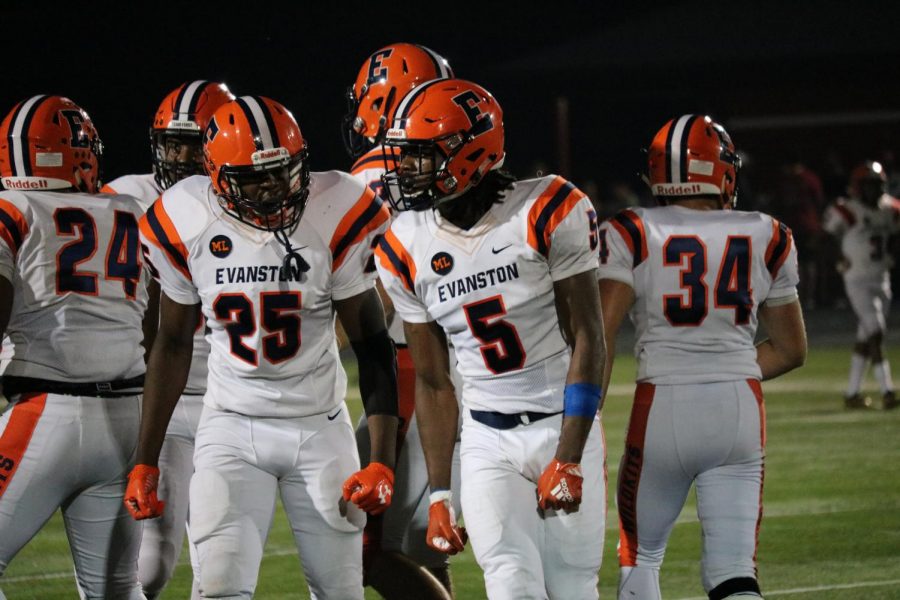 In the opening round of the class 8A football playoffs, Evanston started slow and never recovered as the Edwardsville Tigers came away with a 44-27 victory. The loss ended Evanston’s season as they finished with a record of 7-3, their first seven-win season in 20 years.

A 17 point deficit midway through the second quarter proved too much for Evanston to overcome. Five Wildkit turnovers and three interceptions returned by Edwardsville for touchdowns along with an impressive performance from Edwardsville quarterback Kendall Abdur-Rahman sunk ETHS’ chances of advancing to round two.

Abdur-Rahman, a Notre Dame commit, rushed for 201 yards on 14 carries, averaging over 14 yards per attempt. He also scored on runs covering 53 and 77 yards.

“Their quarterback is the best athlete we’ve seen,” coach Mike Burzawa said. “He’s slick and a great player. Edwardsville came out ready to go and we got off to a slow start and we were playing catch up the rest of the way.”

On the Evanston side, junior running back Quadre Nicholson ran for 91 yards on 26 carries and two touchdowns. Senior quarterback Ben Tarpey connected on 18 of 43 passes, a school record for pass attempts in a single game, for 209 yards and two touchdowns, both to senior wide receiver Michael Axelrood.

“My goal wasn’t to set any sort of record,” Tarpey said. “I had no idea what the record was, I just worked hard at my game. My goal was just to win games.”

Tarpey, only a one-year starter, took over the job after the graduation of Drew Dawkins and became a captain as he took over the offense.

“The leadership role wasn’t too new for me because freshman year and sophomore year I started at quarterback,” Tarpey said. “And last year even though I didn’t start, I learned a lot from Drew and those senior captains.”

Byron Dawkins, the older brother of twins Drew and Trey, also departed last year as the quarterbacks coach. Ryan Healy was hired to fill that sport and Tarpey formed a bond with Healy that he says was crucial to his success.

“He’s been one of the best coaches I’ve ever had just because of how dedicated he is and he was so hard on me so that I could reach my full potential,” Tarpey said. “He always put in a ton of extra time with me. Every Sunday, we would meet for hours to break down film and we were always meeting after practice working on little things. He was always there for me.”

Tarpey was not the only record-breaking player this season, as Axelrood collected the ETHS records for most career receptions, touchdown catches and receiving yards.

Axelrood, who had knee problems going into both his sophomore and junior year, credited his changed mindset for allowing him to get back onto the field ahead of schedule.

“Hard work, dedication and the right mindset were important,” Axelrood said. “Coming back from two major surgeries, I wasn’t supposed to play sophomore or junior year. But fighting in the off-season to make that happen was huge.”

Axelrood’s contributions to the program run much deeper than just his work on the field.

“I think being a leader was the thing that I’m most proud of this season,” Axelrood said. “Just being able to be the guy that my teammates look to for help, being the guy that they trusted whether it be on or off the field.”

Coach Mike Burzawa credited the leadership and mindset of all of the seniors for Evanston’s historic success this year.

“I couldn’t be more proud of the senior class. We had 40 plus seniors that just did a heck of a job,” Burzawa said. “They had a ‘team first’ attitude and just brought enjoyment to me as a coach because they were so tight-knit and they worked so hard.”