After upset win, volleyball bows out in second round of playoffs 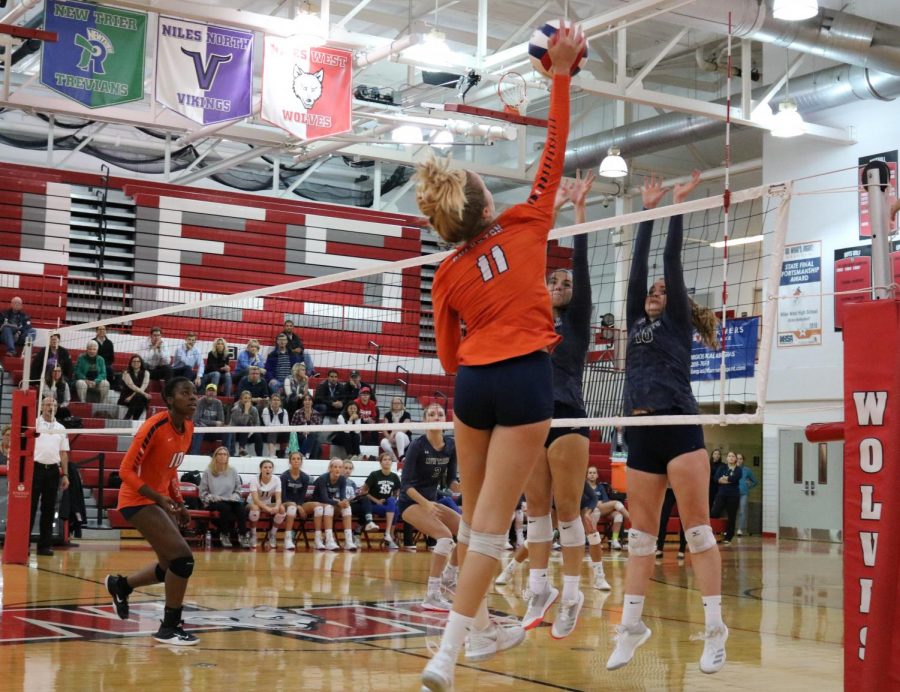 After an upset victory over 15th ranked Wheeling, girls volleyball’s playoff run ended with a loss to New Trier on Tuesday night.

The second ranked New Trier team had been plowing through their competition since day one, and the Kits weren’t able to use their momentum from the previous victory to achieve another upset.

“Going into the playoffs, my team and I were very aware of our underdog status,” senior Anna Henthorn explained. “But we were ecstatic to come out on top in the first round against a team we lost to in the first week of the season at a tournament.”

In the first-round win, senior Rosemary Gibbons led the first set with five kills, which helped the Kits get ahead early. Wheeling came storming back by stringing together five consecutive points. The tight scoring game ended with senior captain Kat Sehgal passing the ball to junior Emma Hinterhauser for a kill to secure their win.

This type of teamwork and energy was something the team had all year, but they weren’t able to put those pieces together for the game against New Trier.

The victory lined Evanston up for the second round matchup against New Trier. The teamwork and energy that was a key to success against Wheeling, wasn’t enough to convert a second upset win in a matter of days.

“We were definitely excited, but toward the end, we get kind of frantic and desperate which is what killed us,” Sehgal said. “Most of the first set, we were leading and had tons of energy, but they came back at the end, and we definitely let that get to us.”

Instead of fixating on the loss, the team is eager to start the next season as they believe this is just a stepping stone on their way to the top.

“The energy and focus were extremely crucial this season. Our juniors are very determined next year to bring back the fight and chemistry we found that first game with all of the current sophomores next year,” Henthorn said. “Their goal is to go even farther and improve even more in the future seasons to come.”

Ending the inaugural season with head coach Liz Brieva as the helm with a 13-24 record, the team is expecting to only improve and build upon this year’s playoff success.