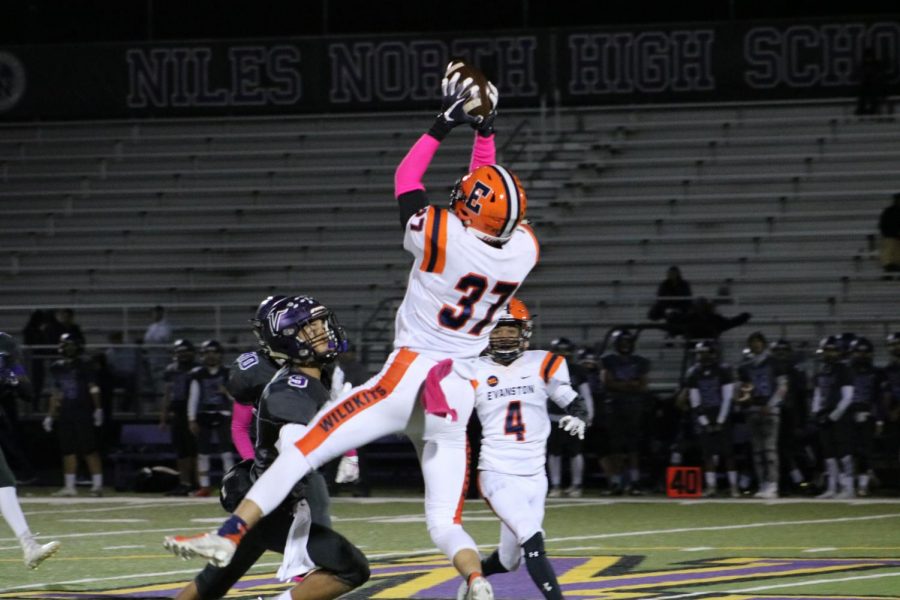 Senior Michael Axelrood elevates for a catch versus Niles North.

ETHS improved to 7-2 after defeating Niles North in dominant fashion, 52-15, on Friday night. It marks the first time in two decades that Evanston football has won seven games in a season, and the first time in seven years that the team has the home field advantage for the first playoff game.

“It feels good,”coach Mike Burzawa said. “Our kids keep knocking at the door, and that was our goal so we could potentially get a home playoff game.”

The home playoff game will be the first time ETHS hosts a postseason game at Lazier Field since 2011, Burzawa’s fourth season coaching the Kits.

But in Burzawa’s 10 seasons of coaching ETHS, Evanston hasn’t had a postseason win. But this special seven-win team looks to change that next Friday night.

The 1998 season was the last time ETHS had seven victories in a single season. Despite their success, this years team looks to fare better in the playoffs, as the 1998 team lost in the first round of postseason play.

“We want to be the change for Evanston, and leave our mark,” senior Cion Miller-Smith said.

Miller-Smith, who has played on the defensive side of the ball for most of his career, started at running back to relieve the resting star junior Quadre Nicholson.

In Miller-Smith’s first start at running back, he did not disappoint. On 12 carries, Miller-Smith tallied 152 yards and two touchdowns, averaging nearly 13 yards per carry.

“It feels good, but I’m still a defensive guy,” Miller-Smith said. “It’s nice to get a touchdown once in a while, but defense is my number one.”

While Miller-Smith made it clear he enjoys playing on the defensive side of the ball, Niles North defenders did not enjoy trying to take him down on Friday night, as he ran through Vikings defenders fearlessly.

“I’ve got to give it all to my offensive line, they’ve been working, giving me big holes and when I see a gap, I just hit it,” Miller-Smith said.

Miller-Smith wasn’t the only 100 yard rusher the line protected on Friday, as senior Malik Ross also tallied 116 yards and a touchdown on eight carries.

Ross, the speedy, versatile matchup nightmare, has played on both sides of the ball this season highlighted by his performances at wide receiver, running back and in the defensive secondary. Evanston’s ground attack was dominant, but senior quarterback Ben Tarpey had another solid game, throwing three touchdowns, all to senior Gerrad Lamour.

On the Kits first offensive play of the game, Tarpey faked a screen pass that shifted the Vikings’ defensive focus up front. He then eyed Lamour who was open running a fly route, and threw a strike over the top to convert on a 59 yard touchdown play.

The Kits never slowed down as they scored seven touchdowns, in addition to a 42 yard field goal from Caleb Hart, the first of the kicker’s career.

The Kits moved to 7-2, and will have their first home playoff game since 2011. After the Kits third straight win to close out the regular season, Evanston looks to carry their momentum into the postseason.