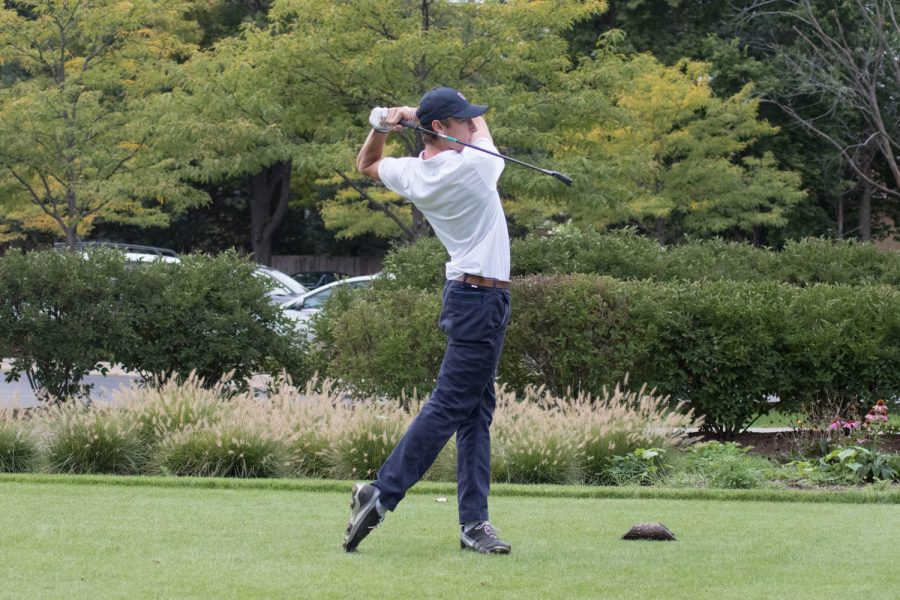 Senior Tommy Barbato tied for 31st in a field of 112 players at the Boys Golf 4A State Championship tournament in Bloomington, Illinois this past Saturday posting a score of four over par. Barbato is the first Wildkit golfer to qualify for the state tournament since the 2013 season when Evanston qualified as a team.

“My goal since sophomore year has been to make it to state,” Barbato said. “Junior year I got closer and wanted to make it as a senior. My whole mindset this year was using the season to prepare for the postseason.”

On one of the most difficult courses of the year, playing nearly 6,400 yards long and featuring nine water hazards, Barbato made 12 pars, five bogeys and one birdie.

Barbato was a three-year standout on the varsity team and this season was the best of his career, though towards the beginning he struggled.

“Candidly, Tommy did not have the best start to his year and he’d tell you that,” Assistant Coach Sean Bostrom said. “But he built on each tournament with small tweaks to his game.”

Bostrom witnessed Barbato’s state play on Saturday. The tournament ended up being shortened from two days to one due to frigid weather conditions on Friday.

“The first day of the tournament was crazy,” Barbato said. “It started raining a few holes into my round, but changed to snow for my eighth and ninth holes. We couldn’t keep playing, so they called everyone off the course and eventually cancelled the day’s scores.”

Barbato started with a clean slate on Saturday and parred his first hole – the course’s tenth hole. But he played his first nine holes in three over par. On the back nine, however, Barbato finished strong, carding a One over par 37 to finish the tournament at four over par 76.

“It’s the best nine holes Tommy has played in his career, highlighted by a birdie on the par-5 fifth hole,” Bostrom said. “Tommy had to hit a gutsy shot from 230 yards carrying a pond the entire way, it probably had a 40% chance of success but Tommy wasn’t playing the odds today.”

Tommy’s brother, Matthew, 2018 graduate, qualified for Sectionals his sophomore, junior and senior years but was unable to make the cut and advance to state. But Matt’s experience helped Tommy along his journey, which was quite possibly the reason Tommy made it to state.

“The reality is that Matt was the older brother who helped blaze a trail for Tommy,” Bostrom explained. “There’s no doubt Matt wanted to make it down to state during his career, but Tommy probably wouldn’t have advanced downstate this year without the prior learning and guidance from his brother.”

“Anytime Evanston advances a player down to state, let alone placing towards the top of the field, it creates a legacy benchmarks for years to come,” Bostrom said.