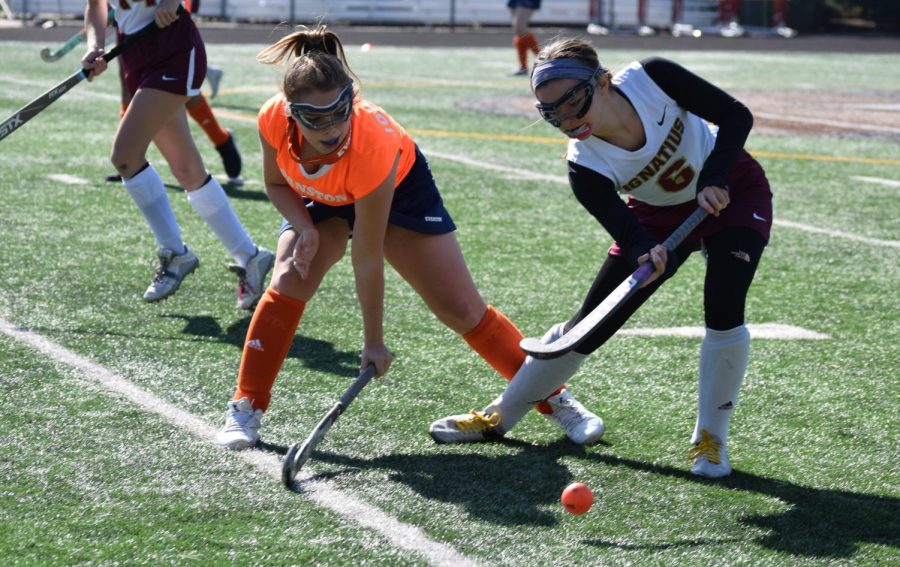 ETHS’ varsity field hockey team came up with their first win of the season on Saturday Oct. 13, as they defeated St. Ignatius 2-1 following two first half goals. Not only was this the first victory of the year, but the first postseason win in the program’s three year history.

“The emphasis was on building a program, building skills and building a community,” coach Sarah Thurber said. “It means a lot to all of us to see the beginning of the next wave of field hockey for ETHS.”

The team that won the first game of the season is a completely new group of players. In the regular season, the program had 54 players on three different teams based on grade level. But for postseason play, they created one team, with only 25 players, all ranging in experience and age.

“We had never played with this team before sectionals,” Thurber said.

But with the way they played Saturday, it appeared as though they’d been playing together for years.

One of the crucial underclassmen who made the leap to varsity was sophomore Josie Lambert. Lambert scored the second of Evanston’s two goals in the game and with the result ending in a one goal differential, it ended up being the knockout punch.

“We only had one practice together before the game so the outcome was way better than expected,” Lambert said. “We all worked really well together and everyone’s different skills really made the team shine.”

Adjusting on the fly is nothing new for the Kits, as their previous head coach, Ejaz Syed, stepped down from coaching midseason.

“We lost our head coach midseason and that could’ve been a blow that would’ve been hard to recover from,” Thurber said. “But this team kept going and readjusted.”

The Kits have to keep adjusting, as they face Glenbard West on Tuesday Oct. 16. With only one practice in between the sectional games, the Kits must prepare on short notice for the talented Hilltopper squad.