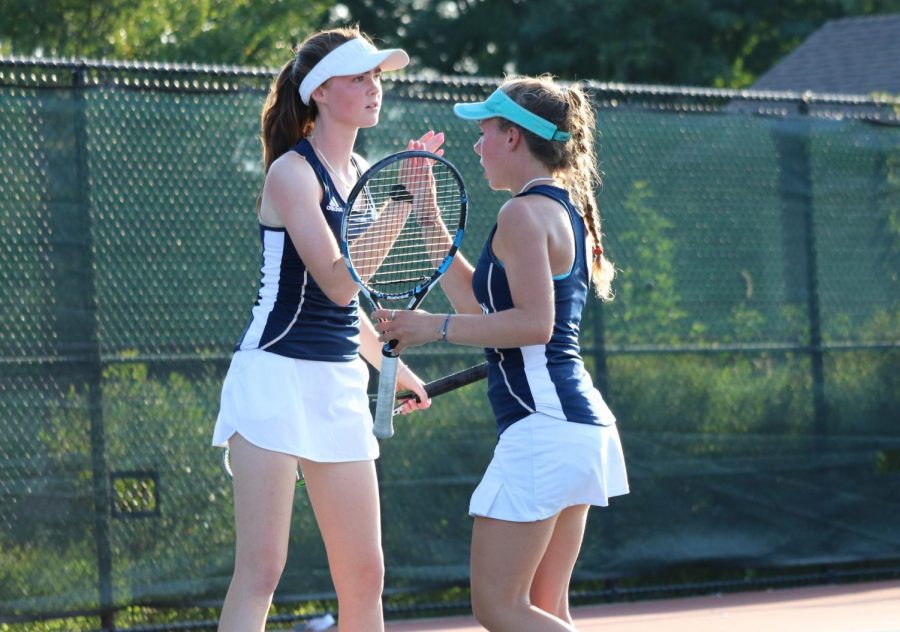 Seniors Margot Conner and Annie Hedges congratulate one another after a winning point during a regular season match versus New Trier.

On Saturday, Oct. 13, Evanston seniors and doubles pairing Margot Conner and Annie Hedges advanced past the sectional round, qualifying for the state tournament.

The tandem have been successful this season largely due to the way that they compliment each other’s game. Hedges has proven to be a great net player, while Connor has shown to have a strong game from the baseline.

“Our playing styles are very contrasted,” Connor explained. “I generally hit the ball harder because I am an aggressive baseline player. But she’s really good at the net and she’s really fast, so when we’re playing another team, they get a little thrown off sometimes because we have very different playing styles.”

In addition to their differing styles of play, keeping a constant optimistic attitude has immensely benefited their play as a team. Even when down, Hedges and Connor work to keep a smile and continue to exude positivity and confidence.

Evanston fans came out in force for the match on Saturday including a large turnout from the varsity who, despite not qualifying for the tournament, came to support their teammates.

“The cheering section is a fifth player in the match,” coach Joyce Anderson explained. “When players are feeling fatigued or not in the zone, cheering can give you the boost you need to get over the hump or close out a match”

The team’s large showing for the sectional tournament was no surprise. The positive spirit and bond of the team proved to be a theme throughout the season.

“It was really nice when they were all there,” Connor said. “They cheer a lot for us, and it really boosts us up, even if we lose a point, they’re still encouraging us. It makes us want to play a lot better because we want to perform well.”

This won’t be the team’s first encounter with state competition either, as they qualified last year as well. While the outcome was not what they wished for, Connor and Hedges saw it as a learning experience.

“Last year, I think we were a little bit hesitant at state, we didn’t necessarily expect to make it. And once we did we were just a little bit stunned,” Hedges said. “But I think we just need to go out and be confident and hit through our shots. I think that’s one thing that we might have hesitated a little bit on last year, and just knowing that we’re there for a reason.”

Connor and Hedges will continue their quest to become state champions on Thursday, Oct. 18 at Buffalo Grove High School.