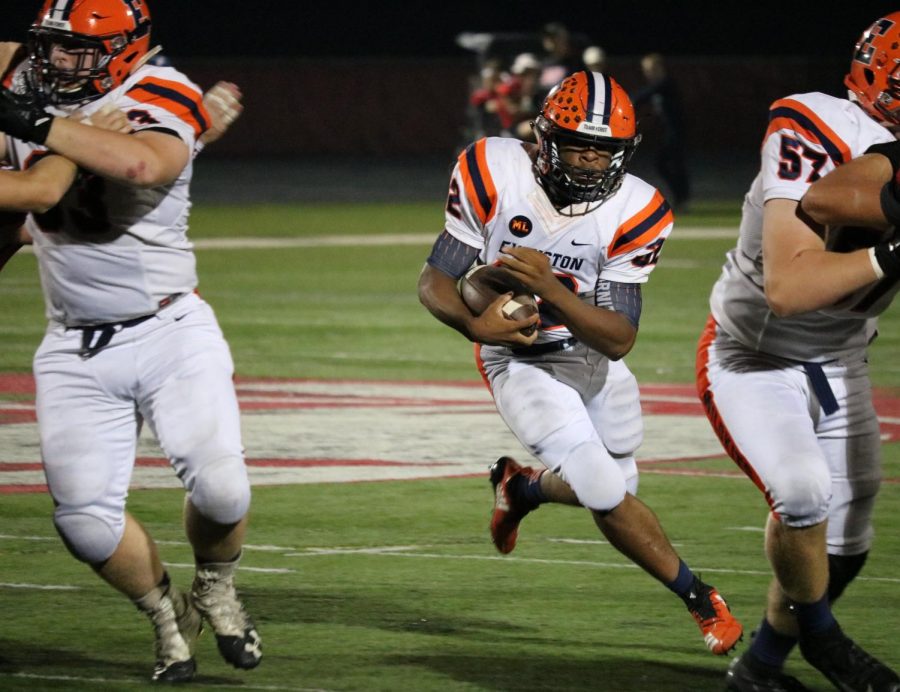 Evanston’s usually stout defensive front gave up a whopping 262 rushing yards Friday night but a ‘bend don’t break’ theme emerged as the Kits only allowed one score all game, resulting in a 28-7 win over conference foe, Glenbrook South.

“It’s an offense that’s really hard to prepare for in three to four days,” Coach Mike Burzawa said. “We’ll talk to the guys and we’ll see what happened, they were able to grind out some drives and limit our possessions, but we didn’t give up the scores. The positive was we kept them out of the endzone, they only got in one time.”

The defensive front included newcomers Connor Groff along with 6-foot-4, 350-pound junior Quentin Ivory, who switched from offense to defense just a week ago.

Senior standout Michael Axelrood had his best all around game of the season, including 16 total tackles and two pass deflections on defense and a nine yard, one handed touchdown reception from quarterback Ben Tarpey on offense.

“‘Axe’ is a beast,” Tarpey said. “He runs perfect routes and always gets open. With coach helping me with reads, I’m able to tell when [Axelrood] is going to be open, and we work every day getting that timing down, and so far it’s paid off.”

It was Axelrood’s the fourth straight game with a touchdown reception. In those four weeks, Axelrood caught five touchdowns and had a two point conversion.

“He’s been a tough as nails football player for us since he came into the program,” Burzawa said of Axelrood. “We expect big things out of him and he delivered. I’m very proud of him.”

Evanston’s other three touchdowns came on the ground, one from senior Cion Miller-Smith and two from junior Quadre Nicholson who racked up 17 carries for 154 yards. After last Friday’s game was cut short due to unplayable weather conditions, Nicholson was hungry to return to the field.

“I waited the whole week and this is what I’ve been waiting for. It felt great. It felt as if it was week one,” Nicholson said.

With the win, the Kits moved to 6-2 (2-2 in the CSL) and clinched a fourth straight postseason berth.  Evanston only has one regular season game remaining, as they will face 2-6 Niles North in Skokie next week. An ETHS victory in that contest would secure a home game in the first round of the playoffs, the first postseason action Lazier Field has seen in seven seasons.