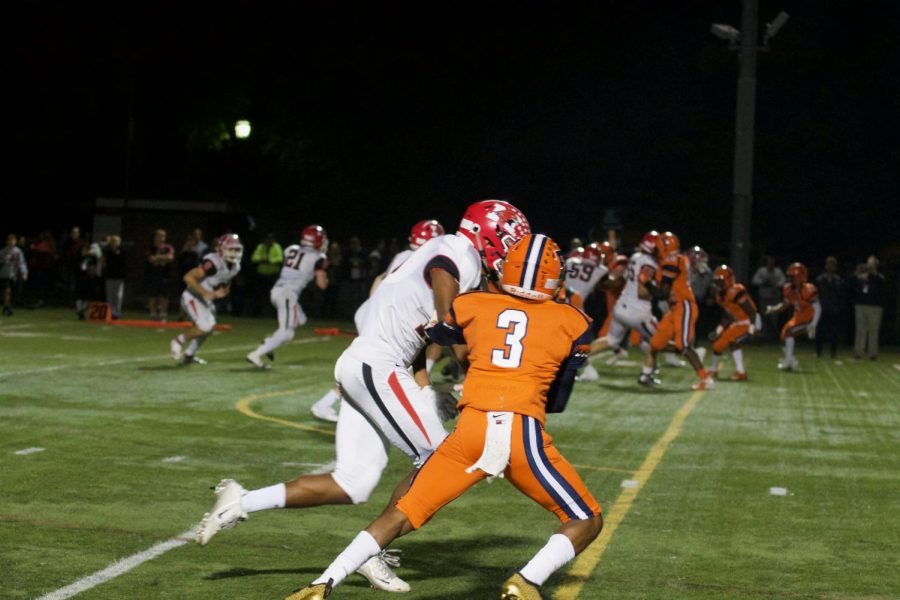 The stage was set for Evanston’s next upset of the season Friday night, but self-inflicted wounds prevented the team’s first victory against Maine South since before the turn of the century.

“I’m proud of our effort, but our execution wasn’t there and that’s what makes it such a tough loss,” coach Mike Burzawa said. “We had too many yellow flags, and that’s our fault. We’ve got to clean up some things.”

The Kits racked up 14 penalties for a total of 123 yards.

On Evanston’s first drive of the game, they marched 60 yards down to the five yard line, They faced a fourth down, which would have resulted in a field goal, but special team struggles forced the Kits to go for it.

Senior quarterback Ben Tarpey saw a receiver in the endzone, but the pass fell harmlessly  to the turf and the Kits turned it over on downs. In a low scoring game, converting on this fourth down could have been the difference for the Kits.

Maine South took the ball from their own five back to around mid field before Evanston’s Gerrad Lamour picked off an overthrown deep pass by Hawks’ quarterback Cole Dow.

The two teams traded punts until midway through the second quarter when Maine South drove 51 yards, without throwing a pass, and scored the game’s first points on a five yard pitch to junior running back Dan Lazic for a touchdown.

“The Maine South offensive line performed well as a unit,” senior linebacker Kameron Kull said. “I think we played hard, but we will watch film and fix what we have to fix.”

Then, on their last drive of the half, Evanston drove it down to Maine South’s 37 yard line but turned the ball over on downs again.

Deep throws had been open for Evanston for the majority of the first half, but they had been unable to connect for a completion. That changed after halftime.

Maine South received the ball after half, but lost it immediately when senior defensive lineman Danny White forced a fumble on the Hawk’s first play of the half. After Evanston’s second take away, the Kits started what turned out to be a short but productive drive, at midfield.

After a three yard run and four yard pass, Maine South was called for a pass interference penalty that moved Evanston all the way down to the Hawks’ 33 yard line.

Tarpey dropped back to pass and spotted senior receiver Michael Axelrood streaking down the middle of the field, throwing a perfect pass that hit Axelrood in stride who found his way to the endzone untouched.

After forcing Maine South to punt on their next series, the Kits got the ball back.

A 14 yard run by junior running back Quadre Nicholson was the first and only positive play of the drive. The next two plays resulted in penalties against Evanston and on the third the Hawks took the lead again. Tarpey was hit as he threw and Maine South’s Daniel Wolf intercepted the pass and numerous missed tackles allowed him to return it for a touchdown.

This could’ve been a back-breaking play, but Evanston fought back.

As the fourth quarter started, the Kits were driving, but in danger of turning it over on downs once more. On fourth down from the Hawks’ 20 yard line, Evanston needed 8 yards.

Tarpey dropped back and found Axelrood again. Axelrood cut back and got past the first defender. He nearly scored his second touchdown of the night but had to settle for a 16 yard gain as a Hawks defender took him down.

On the next play, Nicholson ran it in for a touchdown. But Evanston’s kicking woes showed as Ezra Yang missed the game-tying extra point and the Kits still trailed.

Maine South seized the momentum and scored on the next drive, aided in large part by a pass interference penalty on third down and a face-mask penalty in the red zone.

Evanston had to punt on their next drive but got a chance when the Hawks’ returner failed to make the catch and the Kits recovered the ball on the Maine South 27 yard line.

With the game hanging in the balance, the Hawks’ defense landed the knockout blow.

Nicholson took the ball at the 13 yard line and searched for a hole. As he began his run, a Maine South defender jarred the ball free, and with the ball went Evanston’s spirit.

The Kits had one last opportunity, but Tarpey was sacked on a fourth down play and Maine South ran out the clock.

Evanston may not have gotten the win, but the team remains positive as they head to New Trier next week.

“The fact that we should’ve won that game shows that we can play with anyone,” Tarpey said. “But it also shows how much we still need to keep working.”