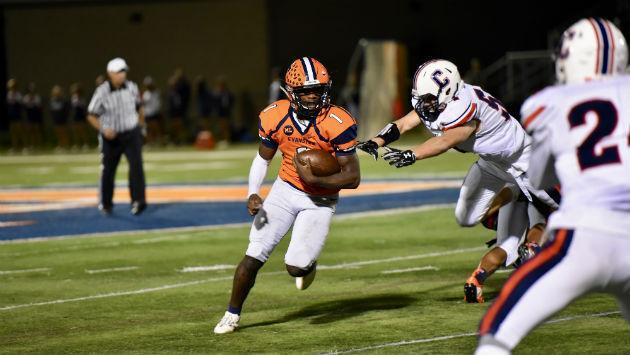 ETHS moved to 3-0 after a tough 20-7 win against Conant on Friday night in a game where offense came at a premium and both defenses shined.

“We wanted to protect our home turf at Lazier Field, so I’m proud of the kids for the effort,” coach Mike Burzawa said.

While the Kits scored a combined 68 points in their first two victories, their tenacious defense was the X factor on Friday, as the defensive unit played their best game of the season, forcing four takeaways on the night.

The Conant defense matched that of the Kits, forcing the ETHS offense to play four down football more often. Evanston’s junior running back Quadre Nicholson was hit constantly by the aggressive defense but still managed to be the workhorse for the team, racking up over 30 carries, 94 yards and three touchdowns.

“I’ve been practicing the whole offseason, conditioning and everything. I trust my O-line, I trust everybody on the field,” Nicholson said.

Friday was also a monumental game for senior linebacker Kameron Kull, who was sidelined for more than a year due to a torn ACL. The game marked his return to the gridiron, but he showed no signs of injury or time away from the field, recording a sack in the second quarter.

In addition to the Kull sack, the defensive front was able to create two fumble recoveries and senior defensive back Trenton Bertrand had two interceptions, including one in the fourth quarter to seal the deal and drop Conant’s record to 2-1.

“We knew it was going to be a four-quarter battle, but now we have a big test up against top-ranked Barrington at their house,” Burzawa said.

The Kits will head to Barrington this Friday, which will be the team’s first road game of the season. After going 3-0 during the opening home stand, Burzawa and the rest of the team hope they can pick up right where they left off at Lazier.