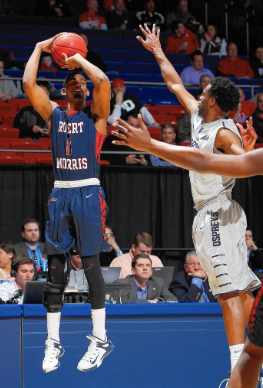 From E-Town to G-Town to G- League, Rodney Pryor’s basketball career has taken many twists and turns. After starting high school at Evanston, graduating from Notre Dame, starting college at Robert Morris and transferring to George- town, the 25 year old joined the Sioux Falls Skyforce of the NBA G-League before suffering a season ending injury in mid February.

Pryor reflected back fondly on his time at Evanston.

“ETHS is my foundation for basketball,” Pryor said, “That is where I found the love, the passion, the work ethic and the ability to overcome adversity.”

He was a standout part of the Freshman B team at ETHS, and he carries strong memories of that time, a testament to the idea that it’s not where you start, but where you finish that counts.

“My best sports memory at ETHS was when we won our twentieth game in a row,” Pryor said.

“The hardest part is finding the right opportunity to showcase yourself,” he said. “So you have to keep working hard and stay patient for your time.”

The hard work appears to be paying off. In 24 G-league games for the Skyforce (nine starts), Pryor averaged 10.2 points and four rebounds, playing 24.4 minutes per game.

I get to do what I dreamed about and love each and every day,” Pryor said. “That’s the best thing about being a pro basketball player.”