Softball continues to build off of last year’s run 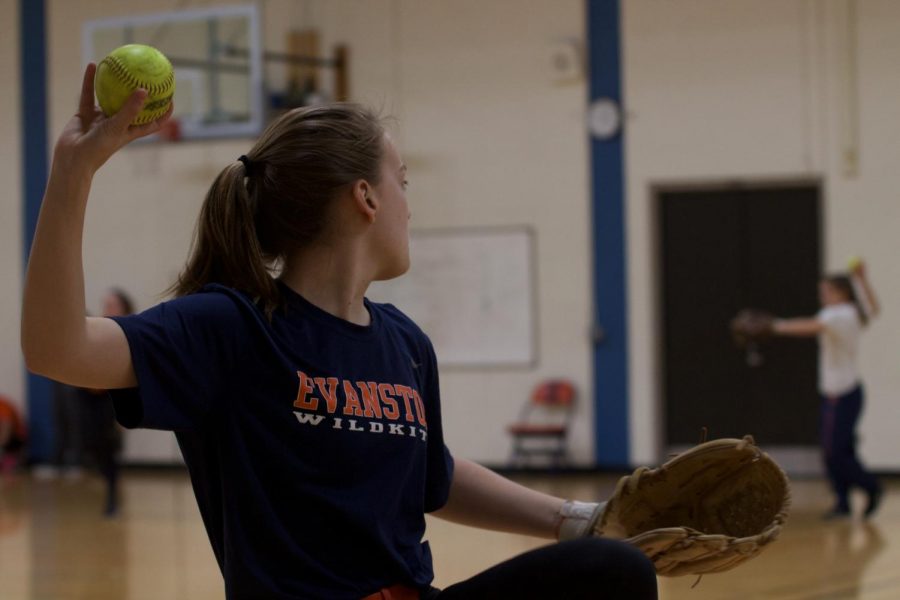 Evanston softball has become a force to be reckoned with across the CSL after they proved last year that they are a championship program, and they haven’t looked back since.

“The culture around Evanston softball has definitely changed,” coach Katie Perkins said. “Our competitive nature is at an all time high. In years past, ETHS softball was viewed as a recreational sport, and we’ve taken it to another level. We all now know that we have a target on our back, which is a great thing for us.”

“Last year’s success has helped bring in a ton of buzz around Evanston softball,” senior Meg Eisfelder said. “From bringing more people out to our games to changing other program’s views about us, it has been a very positive adjustment for us.”

In the 2017 season, the Kits won their first ever regional championship and beat rival New Trier for the first time in 26 years the year prior, turning themselves into an elite program.

“Our overall attitude is to take it one pitch at a time, and give ourselves a chance to win that pitch every single time,” Perkins said. “As long as we keep this mindset throughout the season, we will find success.”

“Our biggest goal is to get even further in the playoffs than we did last year,” pitcher Molly Chambers said. “We have made smaller, more specific goals that will help us make it to that point including keeping the ball in front of us on defense, and keeping our strikeouts to a minimum.”

The Kits may have a small roster of only 12 players, but there is no shortage of talent and firepower up and down the lineup, including a quality pitching staff in sophomore Chambers and senior Grace Ellwood.

“Molly and Grace both bring a strong presence to the mound,” Perkins said. “They create a great balance between speed and movement that really throws opponents off.”

Perkins mentioned that the player that has surprised her the most this season is junior Liz Ayeni in her first year on the varsity team. Ayeni has provided a reliable bat near the bottom of the order, in the sixth and seventh spot, and has proved to be a hitter that teams cannot pitch around.

“The success from our lineup comes from their aggressive mindset,” Perkins said. “If each player goes up to the plate ready to swing early in counts and create hard contact, we will have success.”

Led by team captains Eisfelder and junior Lucy Hart, the Kits have been able to gain momentum and build confidence created in their offseason workout program and overall leadership on the field.

“Early on in my career, I was always the quieter one and tried to lead more by example,” Eisfelder said. “But this year I have made it my goal to be much more vocal which has really helped us incorporate our young players into our team and maximize our talents as a group.”

On April 12, the Kits defeated Glenbrook South on the road in a one run, extra inning battle Evanston will look to complete the season sweep of the Titans next Tuesday.

“We really need to come out from the first inning with the energy we need to hit well and put runs up early, which is something we failed to do the first time,” Eisfelder said.

“In the first game, we struggled to pull away from them because of some routine errors, so we’ll need to be aggressive from the start to make sure we don’t come out flat again and earn a much needed conference victory,” Perkins said.

The Kits will charge head on to face conference foes GBS and New Trier back-to-back next week, and wins would fuel them with extra momentum going into the final stretch of the season and the IHSA playoffs. Head out to the stadium after school to see Evanston softball continue their on going culture shift.