As boys tennis roster size increases, so do expectations 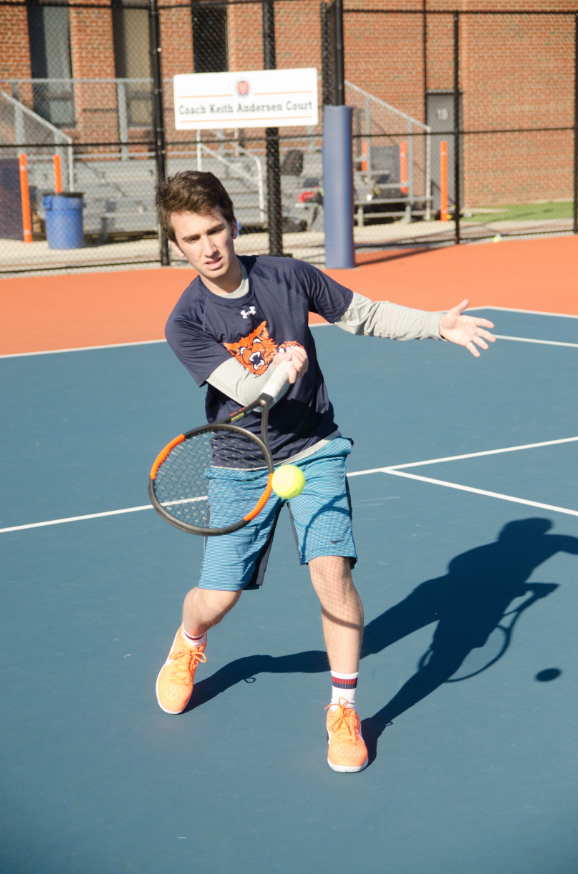 In one of the largest turnouts for boys tennis in terms of size, five freshman made varsity.

“Our main focus this year is to accommodate for each person on the team, from frosh/soph to varsity,” coach Marcus Plonus said. “We’re a very strong team this year, partially because of the maturity levels of our freshman.”

The five freshman on varsity are expected to either start or compete in the majority of their matches this year, as Plonus sees their skill levels as something special.

Being a starter on the tennis team is a different than starting for another sport. For example, there are four doubles duos per team, and the Kits expect to have to freshman start on their second doubles team.

While the team is full of talent, the Kits are relying on their seniors to help teach the underclassman the mental aspect of the game.

“Our seniors mental side of the game is very mature, as they have had tons of experience now,” Plonus said. “Once the team bonds well together, we’ll be competing with some of the top dogs on the state.”

The two expect to be the Wildkits’ top doubles team this year and are looking forward to what they think will be the team’s most successful season yet.

“We’re looking to have our best season in at least four years,” senior Jake Marks said. “The eight seniors this year plan on using the experience we’ve gained to lead our team to a great final season.”

The Kits are excited for their first match of the year at Oak-Park River Forest on March 31. This is the twelfth straight year that they have opened the season against the Huskies.

“We could definitely defeat OPRF this year,” senior Maxwell Newman said. “With the raw talent that we have across the board we’re going to be great this year.”

Matches with Loyola, Glenbrook South and New Trier also stand out on the Kits stacked schedule this year, as the seniors hope to take them down for the first time in their careers.

Still, the Kits are focused on their first match, as the excitement and preparation for the season begins.

“There’s not many feelings like waking up on a Saturday morning, getting a McDonald’s breakfast, and going to compete,” Newman said. “It’s one of the best feelings there is, and we’ve got to enjoy the ride, in our last year.”

Last year, Newman placed third as an individual at this OPRF Invite, but this year he will playe doubles with Avery.

While Newman is anxious to compete again, he is primarily focusing on improving his teammates and teaching them to play and live in the moment this season.

One of the players that Newman is trying to develop is German foreign exchange student, Joost Vester, who is playing for the Kits during his first semester at ETHS.

Vester is a sophomore who played tennis in Germany. The Kits are excited to see him develop, as his serve is supposedly one of the best in the game.

Boys tennis is excited to make a statement as they get ready to kick off the season with their largest team yet.