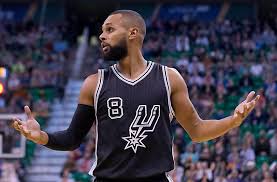 Rarely does one attend a sporting event, at any level, without hearing some sort of jeer, heckle, or other taunt directed towards a team or player. Some fans take these jeers to the next level with racist insults.

Whether it’s due to a closed-minded view or not witnessing racism jeers first hand, many fans refuse to believe that racism directed towards players still exists.

As evident by a couple of recent and prominent incidents in the world of professional sports, this is far from the case.

San Antonio Spurs guard Patty Mills recently dealt with a racist taunt during a Feb. 25 road matchup against the Cleveland Cavaliers. A Cavs fan was caught on video repeatedly shouting at Mills, “Hey Jamaica called, they want their bobsledder back”.

While Mills is black, he is not in fact a native Jamaican. He is of indigenous Australian and Torres Strait Islander descent. The racist remarks were dealt with quickly by the Cavaliers, who banned the fan indefinitely from their arena.

The Blackhawks took the same measures and banned the fans from the arena.

It’s time to stop allowing the “bubble” to prevent us from seeing that issues of race surrounding sports still occur. While it may not seem to be prevalent at school events, this is not necessarily the case. Black players on the Wildkit hockey team have reported racist taunts and threats directed at them while on the ice.

Some find this difficult to believe given the presumed social progression in our community, but it happens. It’s time to step out of the “bubble” and stop acting like racism doesn’t exist at each level of sports.

Because of the fact that we see ourselves as living in and being a part of a diverse community, it is easy to act as though racism in sports does not exist.

It seems that most people attribute racism at a sporting event to the opposing team, the other student section, or whatever it may be. We’ve all heard the accusations: Maine South is full of racists, New Trier has white privilege, the list goes on.

Although it’s important to address racism involved in sports, it is also important to watch ourselves, making sure we hold up to the standards we set for others schools and teams.

As Evanston residents, we think we’re somehow above other communities and fan bases because we are socially progressive, yet this in itself is a form of ignorance.

Whether Evanston fans are the ones yelling racist remarks or not, we should take it upon ourselves do something to spread awareness on the issue.

The bystander effect is important here, as confronting those who yell the racist jeers is a great way to start, stopping the problem.

In many of our minds, these issues don’t exist because we’ve never witnessed them firsthand.

The next step is taking action, like the Spurs or the Blackhawks, and making sure that incidents like these don’t go unnoticed.

Provoking discussions following a racist remark at a sporting event is a great way to get the ball rolling. And as an Evanston student-section, staying true to the standards we hold other schools against is important when it comes to our cheers.

It may not happen right in front of our eyes, but it’s difficult to argue with the existence of racism in sports when it stares us in the face on the front page of the New York Times sports section.