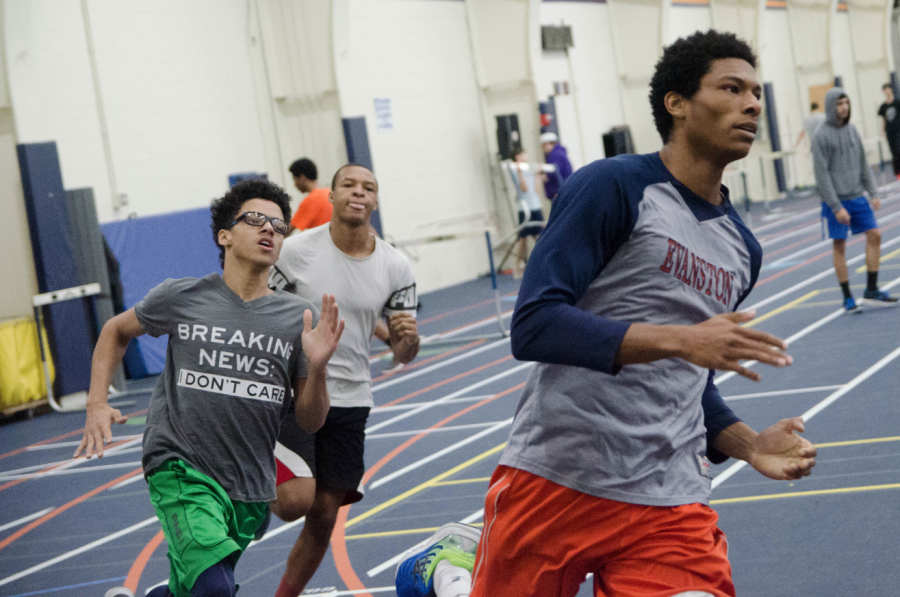 Members of the ETHS track team sprint during practice.

Teams typically prefer to compete against the strongest competition just before the postseason, but the track team is beginning the year against some of the state’s premier teams.

On Saturday, the team will compete in the Lockport invite at Olivet Nazarene University with some of the best schools from all over Illinois.

“Neuqua Valley will be there,” coach Don Michelin Sr. said. “The Plainfield teams always have strong runners and they will be competing, Cahokia comes up from southern Illinois and they’ve been the 2A Champions many times. So the competition is good.”

Even though Evanston lost some top talent from last year’s team, the athletes are confident that they will return to the State meet and come away with a higher finish.

“We have to recognize that we have guys on our team that can definitely make it to State and get some points,” senior distance runner Logan Singer said. “We have to focus on that goal and keep getting better throughout the season.”

Some key pieces on this season’s team that will be key for a deep run in State are Singer along with other seniors Joey Eovaldi and Trey Dawkins. Both Singer and Eovaldi competed on the cross country team this fall and both made it to Sectionals. While Singer fell just short of claiming his spot in the State finals, Eovaldi grabbed one of the final spots to advance.

Dawkins will anchor the throwers, discus and shot put, this year. He has qualified for the State meet in the shot put last season and will be playing football at Denison University next year alongside his brother Drew.

Dawkins is ready to step into more of a leadership role now that his senior season has come around.

“Last year, I left the leadership role to the senior throwers Christian Nielsen and Morgan Brown,” Dawkins said. “But now I’ve kind of made my presence felt throughout the team. I’ve reached out to not just the throwers but people in the other events that usually I didn’t talk to much.”

After the Lockport meet, Evanston will compete at Homewood Flossmoor on Friday, March 2 and then at the Dan Phillips invite at home in the newly named, Willie May Fieldhouse a week later on March 9.