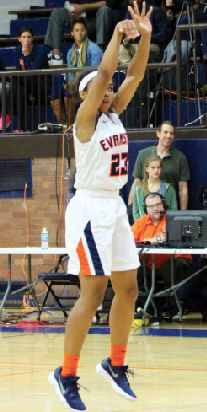 As a 5'7'' point guard, Henning brings agility to all aspects of her game.

While only a sophomore, Kayla Henning is mature beyond her years, as she looks to have a breakout season to fill the void of last season’s graduated talent.

“Kayla is the ultimate teammate,” coach Brittanny Johnson said. “She’s the type of player who will pass up a wide open layup in order to get more of her teammates involved.”

With the departure of the winningest class in school history, Henning remains, as the leading returning scorer from last season where she averaged 8.5 points per game.

As a point guard, Hennings doesn’t necessarily need to lead the team in scoring every night. Johnson explains that Henning’s true value is being a game manager and getting more of her teammates involved.

“She was able to get a lot of exposure early on, and she has incredible support from her mother, that’s her biggest fan,” senior Nadia Thorman-Mckey said.

“The biggest thing that stood out for me was her pace of play,” Johnson said. “As a 13 year old playing against 17 and 18 year olds, she was not far behind at all, and that is what makes her a special talent.”

After graduating from Nichols Middle School, Kayla was quickly immersed in the culture of Evanston basketball, as she started participating in workouts that summer with the newly hired coach Johnson and the team.

“I truly love the game of basketball, and I think it is important for me to remember that when I’m putting in work to get better,” Henning said. “Sometimes I tend to overanalyze things which stops me from playing my game, so I need remind myself to not think too much.”

Her top performance so far this season came against St. Charles East on Nov. 16, where she did a little bit of everything tallying 16 points, seven assists and five steals.

“It has put her in an excellent position this year because she was not afraid to be put in uncomfortable situations as a freshman,” Johnson said.

This attitude and drive that Henning has shown has led her to receive her first scholarship offer to a Division 1 program, University of Wisconsin-Milwaukee. Henning recognizes this as her biggest accomplishment yet, and it motivates her to keep getting better without developing a big ego.

“Last season taught me a lot about myself both mentally and physically,” Henning said. “Being able to experience what varsity play is like and the mental toughness it takes to play at a high level has prepared me for this season.”

Her success is not limited to just athletics, as Henning is a highly qualified student and prides herself on achieving high marks and working hard.

If she can continue on her path, she can become one of Evanston’s all-time greats.