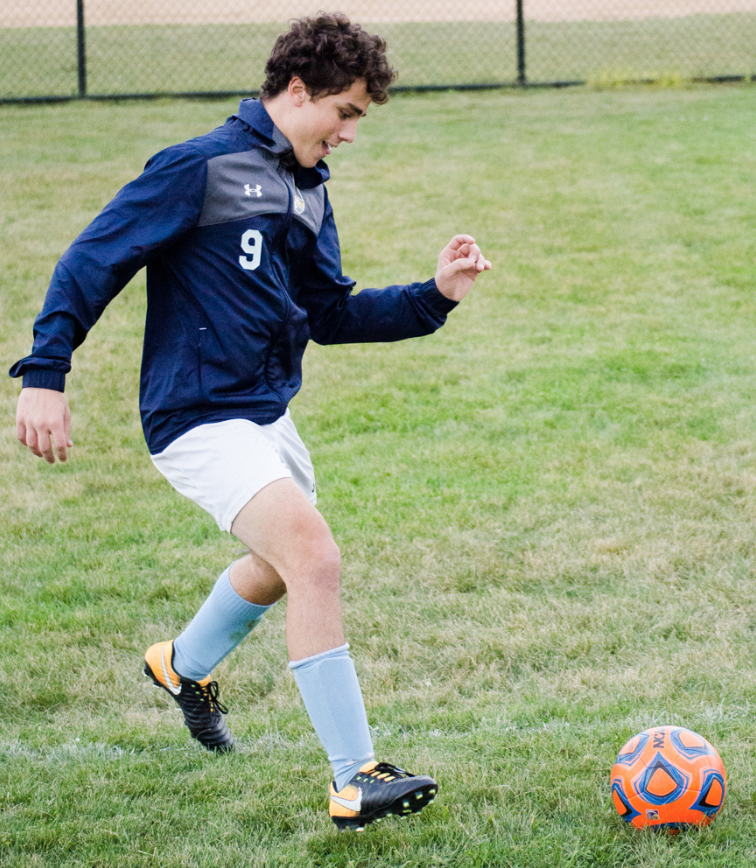 Gavin Rosengarten dribbles the ball at a practice back in August.

“We really believed that this was going to be the year we made it past the supersectionals,” Calixte said.

Coming in, expectations were high. With several returning players from last year’s Elite Eight team, many thought they were poised for an even deeper playoff run this year.

However, the team stumbled to an uneven start. At the beginning of October, their record stood at 9-4-3, including seven shutout wins, but also an 0-4 loss at Waukegan, a loss to top rival New Trier, and back-to-back losses at the Go 4 The Goal Fall Classic in Burlington, Iowa.

“At the beginning of the year, we were still trying to learn each other’s playing style and for the first part of the season, we weren’t playing to our full potential,” senior Nate Pollack said.

But Calixte was never concerned about his team’s inconsistent opening month.

“Our record doesn’t mean anything when the playoffs roll in. Our goal is to be peaking at the end of the regular season so that we make a big run in the playoffs.”

And peak they did. After dominating Prospect 7-2 in their regional opener, they won a gutsy 3-2 sectional match over New Trier, avenging their regular season defeat. Three days later, the Kits bested Glenbrook North 3-2 to capture the sectional title for the third consecutive year. It was undoubtedly the team’s finest hour.

However, the Kits were unable to muster any offense in their next match against Libertyville, ranked #4 in the country by the website Top Drawer Soccer.

The team was largely carried by its 16 seniors. Among them were all-sectional players Aidan Tobin, Colin Thompson, and Jimenez, as well as all-divisional selections Pollack, Nduwayezu Nkurunziza, Niko Kapetan, and Isaac Diop.

“This was probably the deepest team I’ve ever coached at ETHS,” said Calixte.

Those seniors will be hard to replace. However, Calixte is confident that next year’s team will succeed.

“We have seven returning players next year who have been indoctrinated into this culture of winning. They’ve seen our high expectations and that hard work pays off. We expect nothing less next year,” Calixte said.