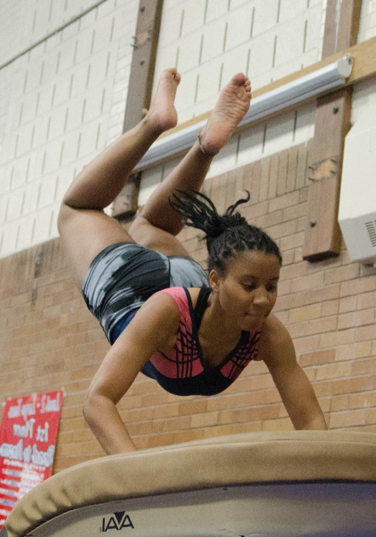 Carelette Williams does the pole vault.

Girls gymnastics will kick off their season with an away dual meet against a strong Glenbrook North team on Nov. 30 at 5:30 p.m.

“GBN is a powerhouse,” coach Meghan Koons said. “They’ve got a lot of girls that come from club teams which makes it hard when you’re trying to bring in girls that have never done gymnastics before. But when we go up against a team like that, we go in trying to beat our own personal scores and not worry about what the other team does.”

Although many Kits are fairly inexperienced, sophomore Jamie Otwell, who is the only returning Sectional qualifier from a year ago, has been with Dreams Gymnastics Club since 2011 and continued competing with them this off-season.

Koons expects Otwell to bring the same consistency she showed last year to the team this season, which included an impressive score of 8.500 on the balance beam at regionals.

“I expect pretty much the same thing from her,” Koons said. “She was one of our high scoring team members last year, so I expect her to keep that up.”

Otwell also competed on the diving team this fall and she believes that the two sports go hand in hand.

“A lot of the skills carry over in both sports,” Otwell said. “One big thing is air awareness, which I’ve always been aware of in gymnastics, it helped me a lot in diving this fall.”

Another standout gymnast is junior captain Fiona Green. Although Green will miss the season due to a hip injury, she will still assume a major leadership role by helping her teammates prepare emotionally.

“Gymnastics is a very mental sport,” Green said. “Having some spirit and just supporting the other girls is so vital to performing well. Being a supportive teammate and friend makes a really big difference.”

After the dual meet against GBN, the Kits will face off at home against New Trier on Dec. 7, then return to GBN for the Spartan Classic on Dec. 8, where they finished in sixth place with a score of 121.675, their best score at that event in over eight years.

The Kits continue to inch towards their goal of a team score of 130, and with leadership from Green and talent from Otwell, that is a strong possibility.