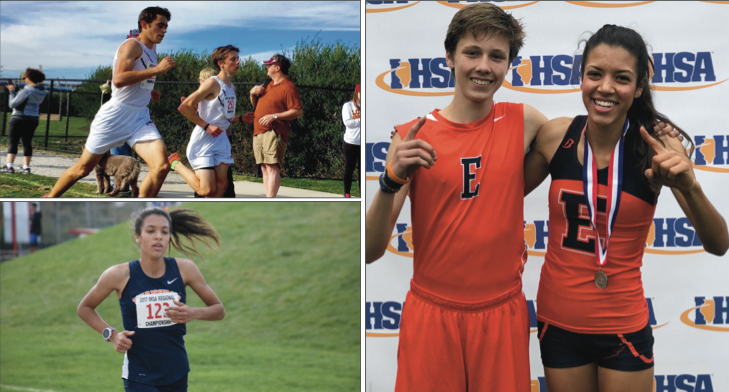 While the departure of two State qualifiers may hurt Evanston cross country’s performance next year, their legacy will shape the culture of the program for years to come.

“This year’s seniors on both teams have set the example that anything is possible,” senior Enyaeva Michelin said. “Last year I placed 117th at state and Joey [Eovaldi] didn’t even qualify for the sectionals.”

“Enyaeva’s mentality throughout has been that anything she competes in, she’s going to try and come out on top,” Enyaeva’s father and boys cross country coach Donald Michelin Jr. said. “I saw her working toward that ever since she was a freshman, and to finish off her career as one of the top runners in the state is really a testament to who she is.”

Enyaeva had the luxury of having her family close by at all times in her competitions, as both her father and grandfather are coaches for the boys team.

“It’s really a great thing for me that they can be there to watch me without having to actually coach me directly,” said Enyaeva. “My dad is great at helping me relax before my meets and sees the lighter side of things. Although it is an intense sport, he never puts any added pressure on me that I don’t need.”

On the boys side, seniors Logan Singer and Eovaldi became the outright leaders on and off the course, as they were the two captains and top two runners on the team.

Michelin Jr. states that Eovaldi has come quite a long way. From being the fifth fastest on the freshman team to becoming all- conference and qualifying for State in his senior year, Eovaldi has made unbelievable progress.

“Joey’s commitment and dedication are really what have pushed him above and beyond,” Michelin Jr. said. “He has come so far as a runner because he has taken the time to develop his craft, and he still has many good years ahead of him.”

“This group of seniors was able to keep the core of guys together from their freshman year, which has been rare in our program in the past,” Michelin Jr. said.

Michelin explained that in years past, freshman cross country runners simply signed up just to say they were involved in a sport and not take it very seriously. But this class of seniors was different in the way that they all committed to the team and improved drastically throughout their careers.

“The culture of this program has definitely changed because of our group,” Eovaldi said. “It has helped that both the boys and girls teams are so close across the board and have taught the underclassmen how to work hard; they will do a great job continuing and improving the environment we’ve created”

As far as next season, Michelin Jr. is excited to see how the team will step up and fill the shoes of the senior class.

“We will have four of our top runners from last season coming back, so they will look to continue the precedent set, and even push it further,” Michelin said.