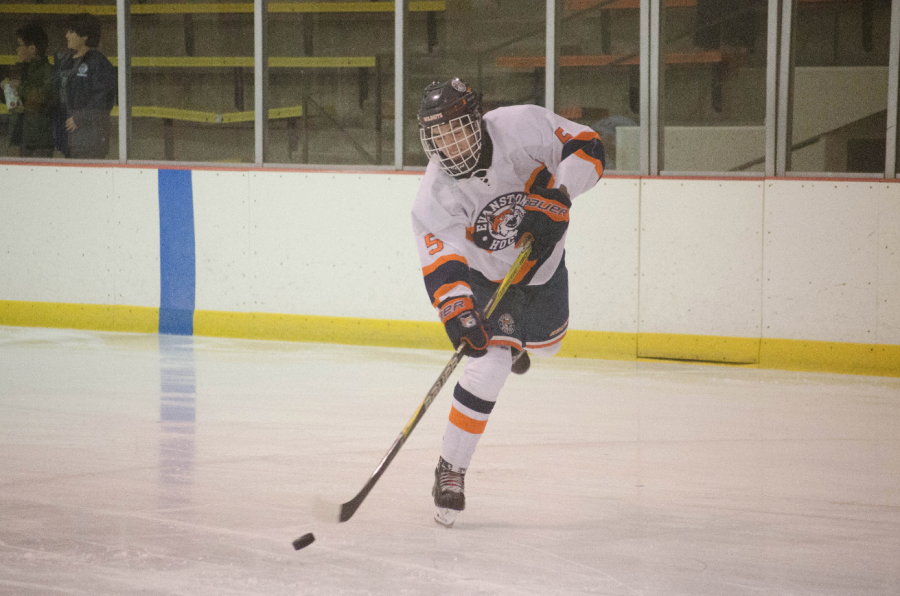 Senior Fritz Gallun moves the puck across the ice.

The boys hockey team will be given a major test as they go up against some of the state’s best competition in the Loyola Thanksgiving Invitational this week.

“I think there’s going to be some really good competition, so we just have to make sure that all of our sets are in, and all of our plays and team concepts are nice and tidy,” coach Del Morris said. “We have the skill set to play with them, we’ve just got to make sure we play as a team.”

The team travels between Lincolnwood, Skokie and Wilmette for a series of games between Nov. 23 and 25, and will face Providence Catholic, Glen- brook South and Stevenson in their opening-round matchups this weekend. All three teams are ranked in the state’s top ten according to MyHockeyRankings.com.

“I wouldn’t say that any team is more of a threat than another,” senior forward Joe Epler said. “To go anywhere in a tournament like this, every game is critical and we’re going to have to win out, more or less. However I would say with Stevenson and GBS, both are great teams and I know they will be close games.”

The 30th-ranked Kits had their playoff run cut short last year when they fell to Stevenson in the Round of 16 and plan to avenge their loss this Saturday at Wilmette’s Centennial Ice Rink in their final first round test.

The state’s top two teams, Loyola Gold and defending State champions New Trier Green, will also be threats in the tournament. Their presence could provide the Kits with a unique opportunity to go against some of the best talent they’ve ever seen.

“It means the world to us,” junior forward Gabi Rodriguez said. “[Being] state champions is something Evanston Hockey may never achieve because of the competition in Illinois, and having a shot at [Loyola and New Trier] is something serious.”

Morris added that the Wildkits’ “rivalry” with New Trier Green stems from the fact that many of their players were on New Trier Blue last year, whom the Kits defeated in the playoffs.

With all of the competition and skill the Loyola Invitational provides, the team is sure to get a great look at what they will face if they make a playoff run this season.

“This is probably going to be our best test before the playoffs and will really help prepare us for the playoffs,” Epler said. “The teams we will end up playing if we go anywhere in the playoffs will be at the level of these teams in the tournament.”

The Kits begin their tournament against Providence Catholic on Thanksgiving Day at Heartland Ice Arena in Lincolnwood.

With many opportunities to improve, the Kits are eager to start off this stretch of games on the right foot.