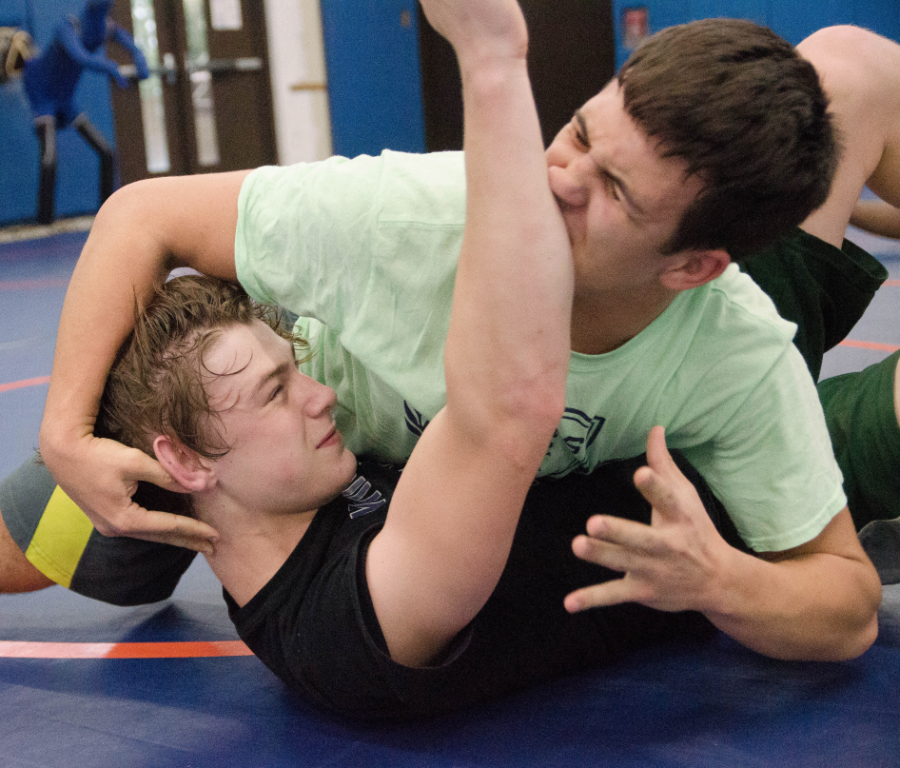 Seniors Van Rutter and Adrian Bytyqi get wrapped up with one another at practice.

While last year’s season didn’t have a successful finish, Evanston wrestling is ready to show off their off-season work and start the season with a win in their first meet on Nov. 21.

“At this point, we’ve put in the work,” coach Salinas said. “Now, we have to stay discipline, follow our plans, and execute.”

The team took two out of town trips for training and competition. They went to Pennsylvania and New Orleans where they became the first team from Illinois to place at that tournament, finishing fourth overall.

The Kits want to carry that success into the regular season, and win their first meet, a quad against Lane Tech, Hope Academy, and Ida Crown Academy.

Lane Tech won their regional last year, but Evanston is favored to beat them, among many other teams, as they only lost two graduating seniors, Damairay Birge and Chris Rivera.

“One thing we really have to focus on this year is keeping a confident mindset regardless of who our competition is,” senior Avante Price said.

Price, being one of the team’s senior leaders, knows how much this season means to the team, as he has been a varsity wrestler for three years now.

Seniors Adrian Bytiki and Izzy Fox, have also been through the highs and lows of the wrestling team over the years.

Wrestling set many difficult, yet reasonable goals, as they see great potential in themselves. And while they want to send at least five wrestlers down State, the most important goal of the season for the team is winning conference.

The past three years, Evanston placed second in conference, to New Trier, by one point each time.

“We’ve been as close as it gets three years in a row now, so we’re ready to take that next step,” Bytiki said.

One of the main reasons the Kits are in position for success this year is the number of returning wrestlers. The Kits have depth this year as many of the underclassman have been training with the seniors and picking up their mentality, which is huge as the team is looking for a true leader to step up.

“Once we add the leadership, which we are lacking a little right now, we will be a complete team,” junior Dylan Kull said.

Overall, the wrestlers are ready and excited for the season, as they are ready to show off the work they have put in this offseason.