Golf changes mindset for this season 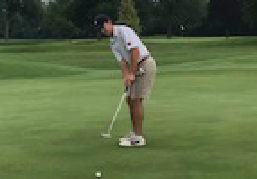 The golf team has struggled over the past few seasons with inconsistent play, but new captains, a strong junior class, and a renewed emphasis on focus could make this season a memorable one.

“I want to create a culture where we are looking for opportunities for success and embracing the challenges,” coach Jed Curtis said.

Curtis has been the head coach for 11 years, his seventeenth season overall with the program. He is a coach who led a team to state for the first time in over 50 years in 2013, when the team finished seventh overall.

After a lack of focus from last year’s leaders inhibited their success, Curtis already likes what he has seen from his new captains, seniors Owen Shapiro, Matthew Barbato and Caleb Spalding.

“They are going to dictate the environment and culture of our team,” Curtis said. “I’m really excited because this is a great group of guys who also work hard in the classroom.”

The captains seem to share the same goals: place in tournaments, have more success in them and make the playoffs. They also agree on what it will take to reach their goals– better focus. Last season the team averaged in the 330 range in tournament play. Coach Curtis said his goal is to lower their average score to between 310 and 315.

Coach Curtis has high goals for this years team, and while focus from the players is important for reaching those goals, so are his own personal coaching goals.

“We want to be more competitive in our conference,” Curtis said. “That means playing better against Glenbrook South, Maine South, and New Trier.”

In order to have more success against conference rivals, Curtis wants to identify weaknesses early and practice aggressively to make them strengths.