The fans create the environment that makes sports so great 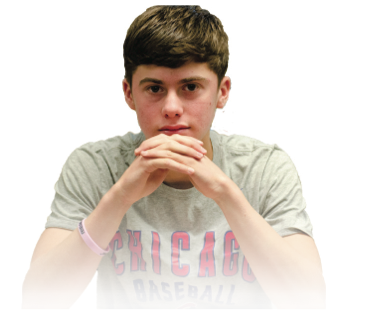 That is the name of my tri-weekly column that has come out over the past school year, but this name is more than a cheesy title for the sports column; it is a lifestyle for the majority of students at ETHS.

One thing that separates ETHS sports from so many other schools is the fans.  ETHS fans travel, cheer and truly care about the student athletes that pour their hearts out on the field, court, gym, etc.  ESPN runs a short series called “We The Fans.”  This series documents the painful life of being a Chicago Bears season ticket holder.  While there is no “season ticket” option at ETHS, many students attend nearly every major sporting event.  This is the fan of ETHS.

The fans are important.  Every athlete will say their favorite games are when the most students come to cheer them on.  It is meaningful, and students do a great job at it.  That is why the fans deserve some recognition.  There have been some moments this year unlike any other, and those experiences can be attributed to the fans.  They create the environment that makes ETHS sports so enjoyable.

Let’s look at it chronologically.  In the fall, there were some horrible games to watch (i.e. Maine South) but also some action-packed, riveting games to watch (i.e. Niles West).  The football season had some blowouts, but that Niles West game stands out as one of the best moments.  There was constant scoring, Ben Easington was running all over the field, and the game came down to the last few minutes.  This was one of the few games where the fans stayed the entire game.  That is what made that experience so spectacular.

Also in the fall, boys soccer brought the action per usual.  They were a contending team throughout the year, and the fans certainly showed them support.  In a fall that tends to be filled with Friday Night Lights, the lights fell on the soccer team from a majority of the season.  Some games that were highlights were the New Trier game, which was filled with legendary chants, or the GBN game where students travelled to Maine East to see our Kits to take down a top three team in the state.  The fans brought energy to soccer games that I had never seen before.  Who knew that soccer could be so fun?

Winter was filled with one sport: basketball.  Yes, other sports were very successful, but basketball brought unmatched excitement.  Both the girls and boys teams were highly ranked throughout the season, and the fans showed up because of it.  Whether it was for the girls at Maine West, who also had a strong student section, or for the boys at Niles West against Deerfield, basketball games were the best fan experiences of the year.  Who could forget the endless heckling against New Trier?  The games against New Trier are always the best.  The house is packed, we outmatch their student section every time, and this year the games were a blowout.  Basketball had one hell of a season.  The fans showed their support by travelling to Chicago State, Maine West, Niles West and more.  Both teams had successful seasons, and the fans matched the energy put out on the court.

Now, who can we attribute this great spirit to? That attribution has to be given to Chris Livatino, the athletic director.  Livatino, no matter what sporting event is being played, has encouraged students to go, gave highlights on Twitter, and brought his own energy to each game.  What makes him so great is that he truly cares about this school and their sports.  He attends as many events as someone possibly can, while giving updates to those who can’t be there.  He deserves recognition for making ETHS sports and the fan experience what they are.  Thank you to Livatino and the athletes for making this year a great year to be a fan. Go Kits!