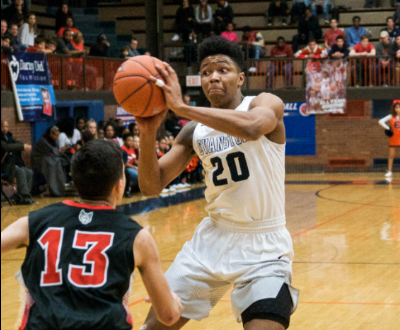 Coach Mike Ellis’ highly ranked team was shooting to win ETHS’ first state championship in half a century.  The path to Peoria for the IHSA final was cut off in a March 14 supersectional loss to the eventual state champion Whitney Young.

The 67-59 final was a heartbreaking close to a great season.  Through much of the season, Kits fans chirped Sun-Times reporter Michael O’brien to give the boys more respect. Eventually, the Tribune ranked the Kits #1 in the state as they finished the regular season with a 24-3 record and only one loss to an in state team.

The long, emotional season all started in the St. Viator Thanksgiving Tournament where they easily swept through competition and brought home the trophy. They outscored opponents 337-249 through five games.

Following the Thanksgiving tournament, the strength of schedule picked up. In what would be one of the toughest schedules in ETHS basketball history traveling to Myrtle Beach, SC and Akron, OH to play nationally ranked teams, the Kits held their own.

On Dec. 17, they took down Lebron James’ alma mater in their own gym 72-66. The following weekend they boarded a plane to play in the Beach Ball Classic in Myrtle Beach. Advancing all the way to the championship in the coveted tournament, they lost 78-76 on a buzzer beater tip in to Imhotep High School who finished third in the nation according to maxpreps.com.

Ellis put together the rigorous schedule to set up the team for success in the playoffs. The plan worked according to senior Malcolm Townsel.

“The strength of schedule helped us be prepared for all types of teams,” Townsel said. “Scrappy run and gun teams, or slow paced fundamental teams.  It also helped us learn to play through adversity.”

ETHS came into playoffs ranked first in the Waukegan sectional. They breezed through the Niles West regional ultimately beating Deerfield 59-42 for the trophy, but they weren’t done collecting hardware.

After beating Loyola in the sectional semifinal, they advanced to the sectional final where the Kits faced their former CSL rival on their home court. A capacity crowd packed the old “Dog Pound.” The host Bulldogs led 53-44 with three minutes left in the third quarter. A 13-0 run gave the Kits the lead by the end of the third and they never looked back winning 81-68.

The supersectional game took the Kits down to 95th street and King Drive on Chicago’s South Side at Chicago State University.

Senior Nojel Eastern gave his best effort, finishing off his illustrious career with a game high 31 points, 10 rebounds and six steals. Eastern was locked in.

“Knowing it could’ve been our last game, I was going to do whatever it took not to lose,” Eastern said.

Sophomore Jaheim Holden was accountable for most of the supporting cast with 10 points—including a half court basket at the buzzer ending the first half. The Kits went to the locker room with the lead, 33-30. However, ETHS only lead for 2:40 of the game, which hurt Coach Ellis’ game plan.

“We wanted to get up by two baskets in the second half and then we could’ve gone to a zone to contain the dribble more because they were aggressively getting to the basket or the free throw line off the bounce,” Coach Ellis said. “With them having the lead, they just stalled and we had to go chase them around the half court line.”

The Dolphins had a well rounded attack with three players scoring double digits. They put ETHS away at the charity stripe shooting 20-25 in the game and 9-11 down the stretch.

Getting downstate requires playing well and a little bit of luck. This time around the luck wasn’t there as sophomore Lance Jones’ bruised tailbone kept him out of the second half. Ellis missed his starting point guard.

“I think the difference in the game was Lance not being able to play because not having our best on-ball defender took him off their point guard who hurt us,” Ellis said.

This specific group of seniors had high hopes ever since Eastern made the varsity team as a freshman. They’ll surely leave along a legacy in the ETHS basketball program.

Williams summed things up for the Class of 2017’s Kits: “I want people to remember that we gave everything we had when we were out on the court.  And nothing was more important to us than basketball when we were in season.”

Looking ahead, Ellis is planning a less competitive schedule next season.  The nucleus of team, will be three guards who as sophomores this season made big contributions.  Jones, Holden and Ryan Bost will work together with big man Matt Hall.

“Next season we will continue to grow as players so we won’t feel the hurt we felt going into that locker room after the super sectional loss,” Holden said.