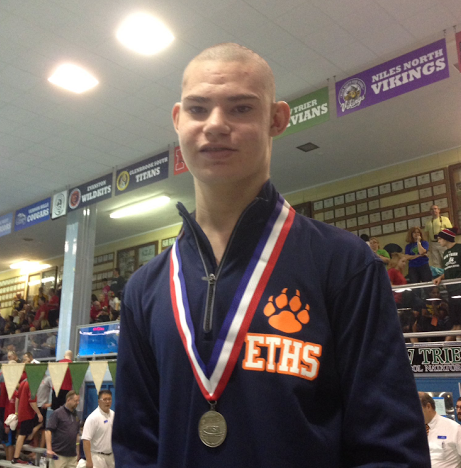 Holzmueller has overcome many challenges during his swim career at ETHS

While many view being born with a disability as a disadvantage, junior Aaron Holzmueller uses it as his motivation to swim, bike and run his way to success.

Aaron was born with a condition called cerebral palsy, a neurological condition that affects a person’s coordination and movement. However, this condition doesn’t seem to hinder the success that Aaron is able to produce in the pool and on the track.

“My goal is to try and be a role model for other para-ambulatory athletes,” Holzmueller said. “I hope that my participation will encourage others to try and become successful athletes.”

In the recent IHSA State swim meet, he recorded two lifetime best times in the 200 and 50 meter freestyle races in the Athletes with Disabilities category, or AWD, bringing home four second place medals.

“Obviously, the state meet is a big setting with lots of pressure, and we’ve constantly been working on improving his confidence levels in those situations,” Silkaitis said. “He showed what he is able to do by swimming as well as he did on such a large platform.”

Two years ago, Aaron submitted an essay to an essay contest that won him a trip to compete in the World Paratriathlon Championship, called “Dare2Tri”, for athletes with disabilities.

In his essay, Aaron explains “The reason I tri is so that I can be the best student athlete I can possibly be. I have cerebral palsy and epilepsy, which means I get about twice as tired as an able bodied person would if they did the same things, but by doing the best I can, I am able to accomplish a lot of different things.”

“What makes me a successful athlete is my competitiveness,” Holzmueller said. “I always make sure I’m giving it my all no matter what I am doing.”