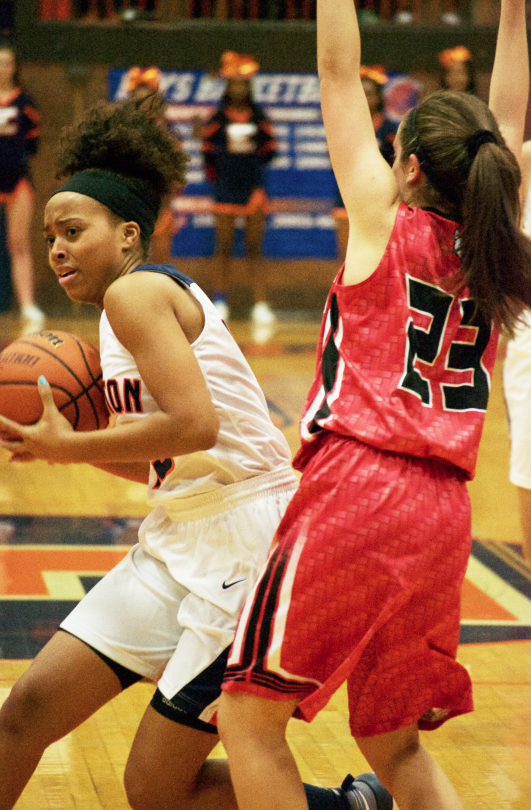 Brianna Miller tries to get around a Maine South defender.

After a thrilling one-point loss last year, the third overall team in the state is hungry to take down New Trier tonight for the first time in five years at Mel Sheets Court at 7 p.m.

The Trevians are coming off two straight seasons with deep runs in the playoffs, finishing third in the 2014-15 state tournament and reaching the sectional semifinals last year. Their success was lead by McDonald’s All-American and 2015-16 Illinois State Player of the Year, Jeannie Boehm, who currently plays at Harvard.

“Boehm was arguably one of the best players to ever play for New Trier,” Johnson said. “That means that this year they have lost a lot of talent and are a young team, but it’s a rivalry game and certainly anything can happen.”

A key player for the Wildkits has been senior team captain Leighah-Amori Wool who recently committed to play at Western Michigan University. She is the program’s all time leading scorer and recently tallied her 1,000 career point in a win against Niles North on Dec. 6.

“We cannot become our own worst enemy,” Wool said. “The biggest key to beating them is to stay disciplined and focused, and I know we want to win this more than anything.”

As for the Kits, their new up tempo style of play implemented by coach Johnson calls for plenty of fast breaks and press defenses that allow them to push the ball up the floor faster and lead to a more potent offense.

This strategy is completely different from the half-court offense that they have been running in past years under previous coach Elliot Whitefield, which could create various matchup and game planning issues tonight for the Trevians.

“Our team is full of athletes, and our new offense really allows us to show that more,” senior captain Krystal Forrester said. “We have become a second half team and our coach really helps us use that to our advantage.”

When a team runs a fast paced offense like that of the Wildkits, the problem that they often face is being able to stay fresh deep into the fourth quarter and beyond.

“Our bench plays a big factor into our success,” Johnson explained. “Anytime you’re able to go nine or ten players deep into your bench consistently, your starters will easily be able to finish the game the way they started it.”

Johnson eventually sees this team being able to average up to 60-70 points per game. She says that it will take some time, as the team started off the year only averaging 44.2 points per game in their first tournament, but quickly improved to 67.7 points over the next four games.

“Our new offense has helped us out a lot so far this season,” Wool said. “We’re able to push the ball up the court and get much better and more open shots. This will help us score even more over the course of the year.”

The last time they took the court against the Trevians in their gym, it came down to the final buzzer when former guard Savannah Norfleet nearly made the potential game winning shot from half court in a 62-61 loss.

“This game is more important than anything to me. Last time we came so close, but we’ve developed so much since then so I know we’re going to have what it takes,” Forrester said.

“We’re ready to face all kinds of adversity and anything they throw at us because our main goal is to be the last team cutting down the net in the end,” Wool said.